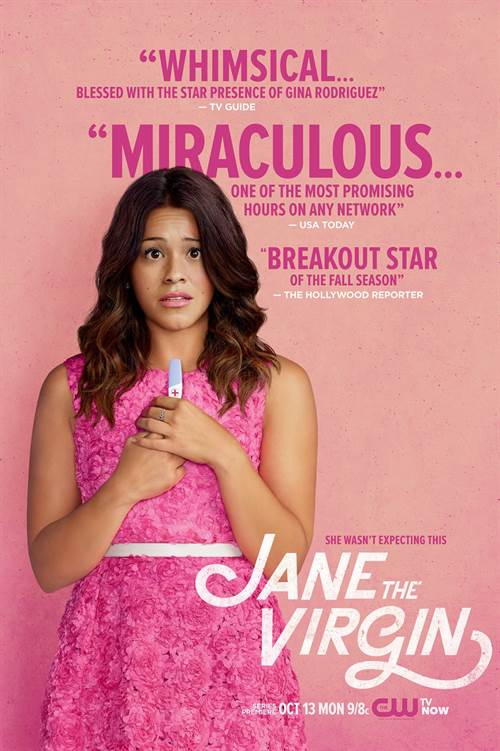 A comedy-drama following a chaste young woman who is accidentally impregnated via artificial insemination as she struggles to inform her devoutly religious family and make the right choices concerning the child. Based on the telenovela "Juana la virgen."

Download Jane the Virgin in Digital HD/4K from the iTunes store.

Jane the Virgin images are © Warner Bros.. All Rights Reserved. 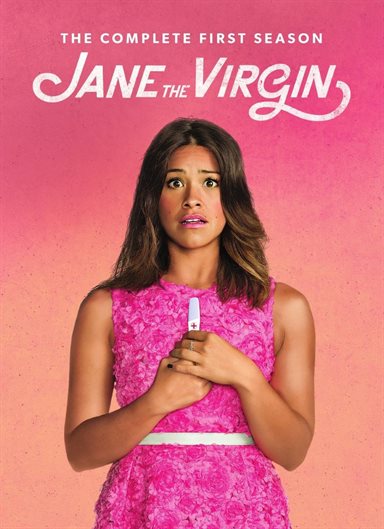 I wanted to give Jane the Virgin points for originality, until I found out it was based on a Telanovela called Juana La Virgen.  As interesting and unique as the premise is, in a world full of superheroes and zombies, I just couldn't help but find it to be a little dumb.  Garnering critical acclaim and a Golden Globe for the show's lead, Jane (Gina Rodriguez, The Bold and The Beautiful), I would have thought the show was better than it actually was.

Jane Villanueva is a chaste young woman who learned from an early age that sex before marriage was a sin.  A devoutly Christian woman, she is saving herself.  Unfortunately, her plan hits a roadblock when she goes to the gynecologist for a routine checkup, accidently gets artificially inseminated (I know!) and finds herself pregnant before ever being intimate with a man.

When she discovers the donor's father, Rafael (Justin Baldoni; The Bold and The Beautiful), is her new boss whom she has a crush on, and is now sterile because of a bout of cancer, she decides to keep the baby and give it to Rafael and his wife, Petra (Yael Grobglas; Reign) to raise.  Somewhere along the way, Rafael and Petra break up and he and Jane start dating (because that happens in real life all the time!).  Adding to the mix, Jane's Father, who she has never known, turns out to be a telanovela superstar who Jane…wait for it…has a crush on.  Are you ready to groan yet?

While Rodriguez is excellent and is the backbone of the show, the rest of the cast isn't amazing.  I really liked Jane's grandmother, Alba, played by Ivonne Coll (Teen Wolf), however, and thought she was a great casting decision.  Baldoni and Grobglas are mediocre and could easily be replaced by other actors, and there is something about actor Brett Dier (Ravenswood), who plays Jane's boyfriend, Michael, that just doesn't work for me.  Maybe it's his somewhat immature, goofy nature coming across that doesn't seem like a good fit for Jane or Rodriguez.

The DVD has a few extras that fans of the show will enjoy including a gag reel, a look at the cast and, of course, deleted scenes.  I found the extras, at times, to be more interesting than the show itself and was intrigued when the production team discussed the use of color to set the tone of each scene.

Jane The Virgin is getting a lot of praise and accolades, but, I, for one, simply don't get all the hype.  It's a cute enough show; however, it's also cheesy, stereotypical, unrealistic and mildly stupid at times.  As it begins Season Two, I hope they dial it up a notch to live up to the reputation it has received.  Grade C+