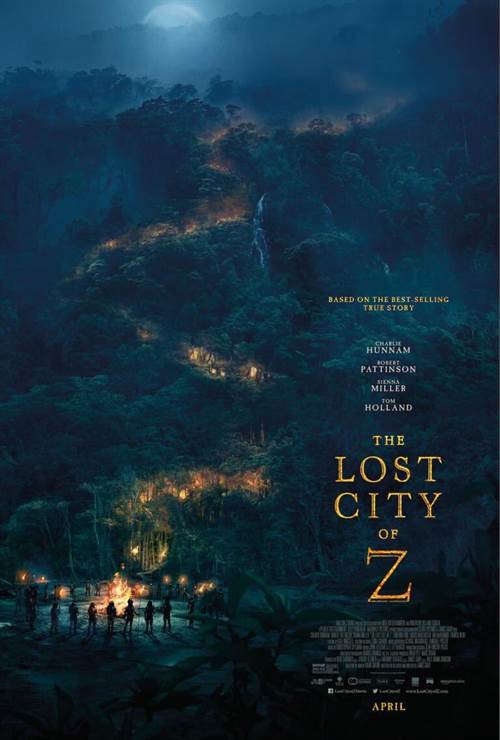 The Lost City of Z Synopsis

Based on author David Grann’s nonfiction bestseller, THE LOST CITY OF Z tells the incredible true story of British explorer Percy Fawcett (Charlie Hunnam), who journeys into the Amazon at the dawn of the 20th century and discovers evidence of a previously unknown, advanced civilization that may have once inhabited the region. Despite being ridiculed by the scientific establishment who regard indigenous populations as “savages,” the determined Fawcett – supported by his devoted wife (Sienna Miller), son (Tom Holland) and aide-de-camp (Robert Pattinson) – returns time and again to his beloved jungle in an attempt to prove his case, culminating in his mysterious disappearance in 1925. An epically scaled tale of courage and obsession told in James Gray’s classic filmmaking style, THE LOST CITY OF Z is a stirring tribute to the exploratory spirit and those individuals driven to achieve greatness at any cost.

Stream The Lost City of Z in Digital HD/4K from the AppleTV store. 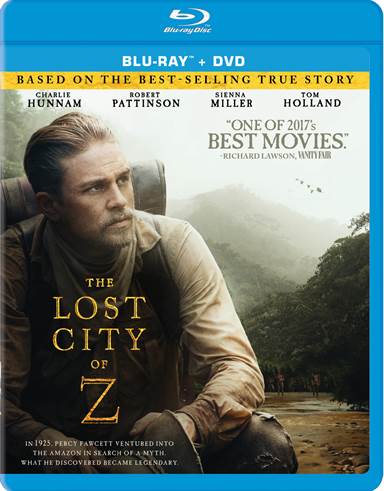 Eldorado, the elusive city of gold has been searched for many times over.  Considered to be located somewhere in the Amazon jungle, explorers have risked life and limb to try and find it.  Unsure if one explorer, Percy Fawcett was actually looking for El Dorado but he was an avid explorer and claimed to have found remnants of a long gone civilization while on a mapping expedition for England.  Based on the book, The Lost City of Z by David Grann, the film of the same name is coming to Blu-ray this week.

Percival Fawcett (Charlie Hunnam; Sons of Anarchy) was a Major in the British Army who was a fellow of the Royal Geographical Society.  When in 1906 the British Government, as a neutral third party, was called upon to determine border lines between the Brazilian and Bolivian countries in South America, Fawcett was sent. While there he claims to found evidence of a lost civilization in the Amazonian Jungle.  Upon return to England, he reported his findings to ridicule and skepticism among many Brits.  However, he convinced some and was given funding to return again several times.

After serving in World War I Fawcett once again returned to the Amazon despite numerous perils. Over time many of his men died from disease or were killed by local tribes.  Fawcett insisted though on returning to Brazil and on April 20, 1925, he and his son Jack (Tom Holland; Spider-Man: Homecoming) began their journey to locate the lost City.  Taken over buy local tribesmen the ending shows the two men being carried off in a trance like state. Although nobody knows what happened to the two men in real life the film leaves the audience guessing with an open-ended question mark.

Hunnam is very good as Fawcett playing him with a calm demeanor and not the obsessive, goal driven human one might think he might have been in real life.  Sienna Miller (American Sniper) as his wife Nina portrays a strong female at a time when women were mostly seen but stayed in the background.  Her desire to explore with him and to take on the responsibilities at home while Fawcett was away is easily felt by the audience.  Robert Pattinson (Twilight) also adds another layer to the film as Henry Costin, Fawcett's travel companion on several of his journeys through Brazil.

The Blu-ray is presented in 1080p video with a 2.39:1 aspect ratio.  The colors of the jungle come across as lush and full while the battle scenes are purposely muted and dreary.  The DTS-HD Master Audio 5.1 is one of the highlights of the movie especially when Fawcett and crew are exploring the wild jungles.  Animals can be heard from the side channels fully while the dialogue is clear and sharp through the middle channel.

The package only has the Blu-ray disc and does not include a DVD or a digital code for downloading.  The disc offers minimal extras including audio commentary by director James Gray, Adventure in the Jungle, From Novel to Screen and Expedition Journal.  While there aren't many features they do have some interesting information.

The Lost City of Z takes a little bit to get going but ends on a high note and makes one wonder what ultimately happened to the famed explorer.  With a very good cast and excellent direction this drama entertains for over two hours and is worth sitting through as least once.