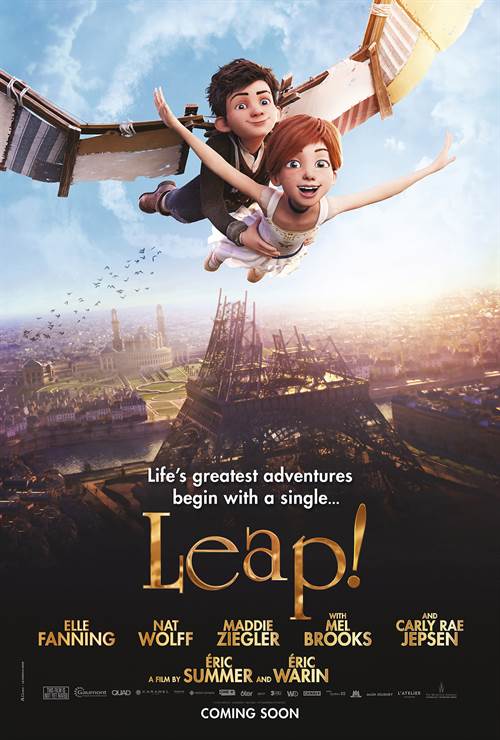 11-year-old orphan, Félicie (Elle Fanning) has one dream – to go to Paris and become a dancer. Her best friend Victor (Nat Wolff), an imaginative but exhausting boy with a passion for creating, has a dream of his own - to become a famous inventor. In a leap of faith, Victor and Félicie leave their orphanage in pursuit of their passions. But – there’s a catch, Félicie must pretend to be the child of a wealthy family in order to gain admittance to the prestigious and competitive Opera Ballet School in Paris. And with no professional dance training, she quickly learns that talent alone is not enough to overcome the ruthless, conniving attitudes of her fellow classmates, led by the devious Camille Le Haut (Maddie Ziegler) and her wicked mother Régine (Kate McKinnon). Determined to succeed, Félicie finds her mentor in the tough and mysterious school custodian, Odette (Carly Rae Jepsen) who, along with Victor’s encouraging friendship, help her reach for the stars.

Stream Leap! in Digital HD/4K from the AppleTV store.

Leap! images are © Weinstein Company, The. All Rights Reserved. 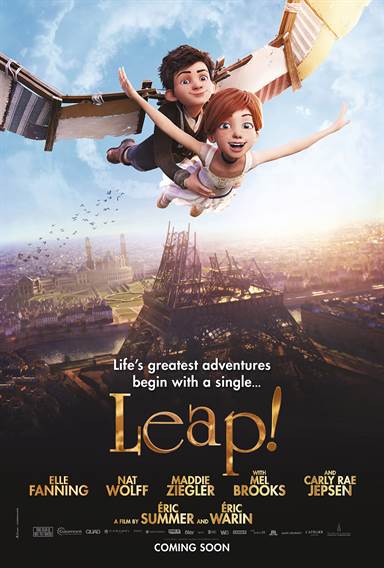 As children, we all have dreams.  Some want to grow up and be firefighters, some want to be cowboys and yet others want to be ballerinas.  However, over time, dreams change and people grow up.  Sometimes though, children get to live out their dreams or at least get the chance to try.  Imagine what that must feel like – if you've never had the opportunity to have your childhood dreams fulfilled.  For one lucky young lady that chance came in Paris at the Ballet.  Through hard work and sheer determination, Felicie (Elle Fanning; Maleficent) lives out her dream in a rather unexpected way.

In Brittany, France there is an orphanage that is home to both Felicie and her best friend Victor (Nat Wolff; Paper Towns). Each dreams of grandeur – Victor as a great inventor and Felicie as a Ballerina.  In that vein, they run away and wind up in Paris, only to be separated.  When they meet up again, Victor has become a famous inventor's apprentice and Felicie has weaseled her way into the Paris Ballet School by posing as Camille (Maddie Ziegler; Dance Moms), a spoiled, bratty girl who breaks Felicie's music box.

Once at the school, Felicie realizes she doesn't have the necessary training to be a ballerina and is likely to be kicked out at the first opportunity.  However, she is taken in by Camille's cleaning lady, Odette (Carly Rae Jepsen; Grease Live!), who used to be an amazing dancer herself, and as Felicie helps Odette clean. Odette, in turn, teaches Felicie how to dance.  Unfortunately, Felicie is soon found out to be a fraud and must battle against trained dancer Camille for her rightful place at the Ballet.

Fanning's melodic voice lends itself to the passionate Felicie who has a natural musicality running through her that makes her a born dancer.  Wolff (in the American version) gives Victor a boyish charm that makes one want to root for him to succeed.  The Talented Kate McKinnon (Saturday Night Live) lends her vocal talents to three voices in the movie and legendary Mel Brooks (History of the World Part I) gives Luteau, the caretaker of the orphanage, his gravelly tone meant to scare the children.  New to the acting world are Jepsen and Ziegler but both do an admirable job with their roles.

The animation team spent over two years bringing Paris to life and their hard work and dedication pay off with detailed scenes that are very well done.  The 1080p video quality simply enhances their work showing the smallest intricacies drawn with exacting measure.  It is one of the features of the film to be admired.  The DTS-HD Master audio 5.1 displays a terrific and varied soundtrack that will have little ones dancing in their seats.  The sound effects and music fill all the speakers beautifully.

While the digital download only offers 2 extras, they are interesting to watch.  At a little over 8 minutes long each, they showcase the vocal talents of a terrific cast and give some insight behind the animation that I mentioned above.

Even though the premise is nothing new, the message is felt none the less. Younger audiences will delight in the fun tale while learning to "never give up on your dreams".  They will, in some ways, relate to Felicie and Victor and hopefully see a little bit of themselves in these two who are striving for greatness.

As an adult, some of the elements don't add up such as dialogue used that would not be a part of the vernacular in 1900's France or the idea that Felicia could become a premiere ballerina in a few short weeks.  However, adults are not the target audience and any child with a dream will enjoy this movie. 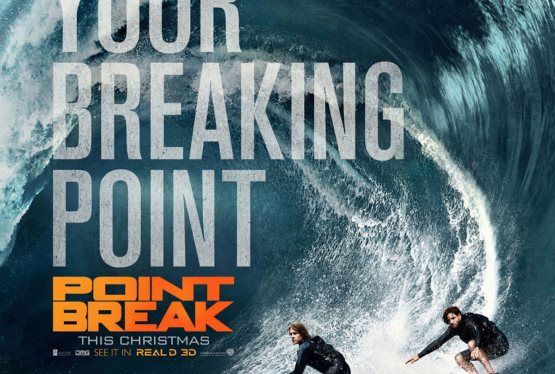 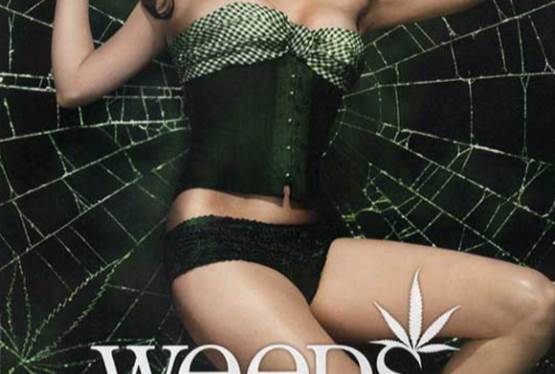