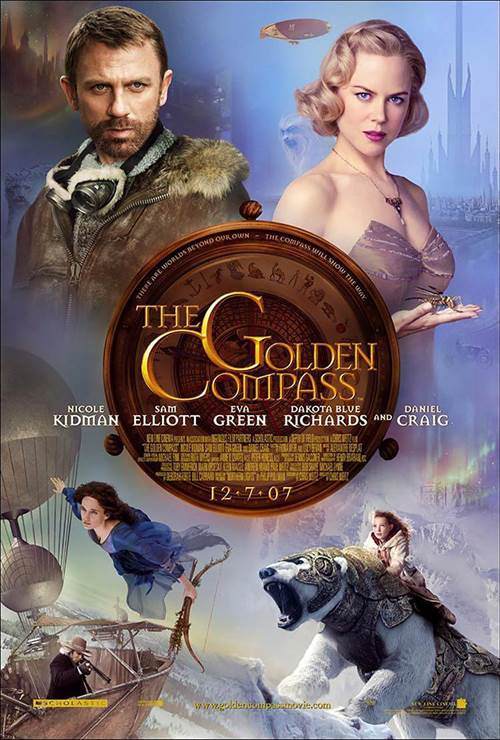 Based on author Philip Pullman's bestselling and award-winning novel, The Golden Compass tells the first story in Pullman's His Dark Materials trilogy. The Golden Compass is an exciting fantasy adventure, set in an alternative world where people's souls manifest themselves as animals, talking bears fight wars, and Gyptians and witches co-exist. At the center of the story is Lyra (played by newcomer Dakota Blue Richards), a 12-year-old girl who starts out trying to rescue a friend who's been kidnapped by a mysterious organization known as the Gobblers - and winds up on an epic quest to save not only her world, but ours as well. The Golden Compass stars an ensemble cast that includes Nicole Kidman, Daniel Craig, Sam Elliott and Ian McShane. The film is written and directed by Chris Weitz (About A Boy, Antz) and produced by Deborah Forte and Bill Carraro (Frequency). It is executive produced by Andrew Miano and Paul Weitz (In Good Company).

Stream The Golden Compass in Digital HD/4K from the AppleTV store. 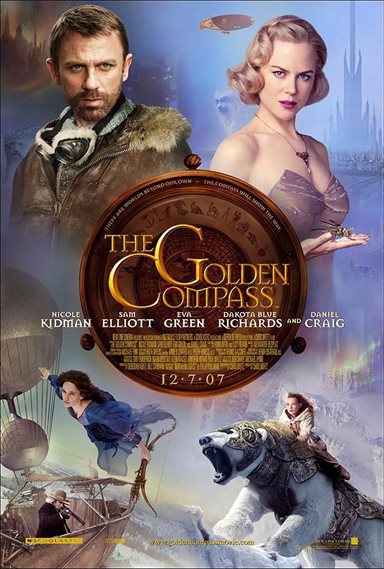 Canada is forward thinking: their politics are more progressive, their environmental discipline is more advanced, and their movie sneak previews are a week ahead.

In the UK, the book was called Northern Lights by author Philip Pullman who was described as "the writer the atheists would would have prayed for, if atheists prayed." This is because his children's literature series, the His Dark Materials trilogy, is profoundly anti-religious (and, perhaps most specifically, anti-Catholic). It's also a rocking fantasy set in a fantastical world where people have spiritual animal companions and high tech zeppelins fly over magnificent imaginary cities. With the success of other fantasy works like Narnia, the Harry Potter series, and (non-children's lit), The Lord of the Rings. New Line gave Pullman's works the green light.

It certainly looks like a million bucks--or, more precisely, 205 million. This buys everything from CGI skylines to CGI animals to a fairly star-studded cast with Daniel Craig, Nicole Kidman, and the now completely type-cast Sam Elliott playing a salt-of-the-earth cowboy type (who flies an air-ship). Ian McKellen does the voice of a CGI talking armored bear, and Christopher Lee glowers evilly as the diabolic 'First High Councilor.'

So it's got cast--what about story. Weeeell ... there we run into the real issue. The story, in broad strokes, is that the autocratic rules of the world, the Magisterium, is trying to consolidate its power over the world--and maybe, if the rumors of a 'dust' that opens doors to other worlds, all worlds. On the heroes side is the intense gentleman explorer (or, well, maybe roguish adventurer) Lord Asriel (Craig) and cute young girl Lyra Belacqua (Dakota Blue Richards in a brilliant debut performance). It's not clear why Lyra is intertwined with the story line in the beginning--but it quickly becomes clear that she is the sole person who can read the mystical Golden Compass which is a truth-telling device that threatens the hold of the Magesterium itself.

Also: kids are disappearing, the lushly evil Marisa Coulter (Kidman) is afoot and there are plots to either uncover the dust (Lord Asriel) or shut it down entirely (the Magisterium) and so on. What we really care about, I think, is the cute, plucky Lyra and her animal companion Pan (voiced well by Freddie Highmore). She certainly doesn't understand all the machinations and while she's given the compass to protect, she doesn't quite know what she's supposed to do with it.

But in short order the force of the plot picks up and she (and we) are carried along on a non-stop series of scenes that look fantastic and feel a little disjointed.

I think this is because it's taken from a book I didn't read: when Lyra shows up at a town and runs into the crusty, smooth-talking Elliot, he gives her advice that dovetails with her compass-derived prophecy. Next scene she's meeting an important ally and manages exactly the right words to recruit him--so then he's recruited and there's an action scene and then on to the next. I suspect that in the book the narrative stopped for two things:

In Compass we are assured these characters are all part of the team because they are on-screen at the same time and make the requisite speeches--but in terms of getting a feel for them--or understanding how Lyra comes to trust them, it's pretty thin. The plot device of the compass itself presaging developments is somewhat mysterious too: she gets a memo from the future, goes and does something, and there's a reveal. This drives the plot adequately but it feels, to me, anyway, more like the movie is hitting plot-points from a beloved book than actually translating the story from text to film.

Narnia was blessed in that, for The Lion, The Witch, and the Wardrobe, at least, the story-line is very tight. It's cinematic with good linear action, no subtly save for embedded symbolism, and a big battle at the end. The kids learn things at the same rate as the audience so each reveal makes sense in an organic fashion. Lord of the Rings, on the other hand, required a series of brilliant decisions by Jackson to turn into the masterpiece that it is. Potter falls somewhere in the middle: the first two books were the equivalent of simply 'pointing the camera at the script' and the rest of them brought in solid directors to excises the obviously unnecessary plots (House-Elf-Liberation-Front) and steer the film towards the major strokes.

I don't know Pullman's books, but it seems like the major revision was to make the films a lot more religion friendly (in the movie, the Magisterium is simply a dictatorial government--in the books it is clearly the Catholic church). I don't think director Chris Weitz spent a lot of time figuring out how to translate the 416pg book to the 113 minute movie. This is probably good for young-audience true-believers but was a little unsatisfying for me who didn't so much care about plot-points but more wanted to understand the (obvious) bond between girl and loyal warrior bear (for example).

If this is a criticism, though, it isn't an incredibly harsh one. The mechanics of story-telling are interesting to me--and important--but the movie is almost overpowering in its graphical appeal. There are parts that are truly tense (the scene in the cage in the research station) and some characterization (by Kidman and Craig, mostly) that does pay the bills. CGI-animals are also getting better and since there's a bunch of them on-scene (every human has a companion) that's a good thing.

In the final analysis, The Golden Compass is an example of what happens when a large budget movie spends its effort on bringing a book to the screen with the primary goals of fidelity (I assume the movie, save for the a-religious softening, is very true to the books) and appearance instead of translation of the narrative. Perhaps this is because the assumption is that young readers will reject any movie that doesn't fit their recollection point-for-point. Maybe its because the difficulty in filming the movie took all their creative energy (the director quit once, being daunted by the technical complexity--and then came back). Maybe it's simply because the people involved don't care as much? I'm not sure.

The movie is worth watching for the spectacle alone. It's worth seeing for the cast--for the set pieces--for the vision. The movie's huge selling point: that every person gets their own animal companion that is a physical projection of their own soul is absolutely wonderful. I'm sure that's a huge appeal of the books and the talking animals are not only well done but properly charismatic--some of the best virtual characters going. I'm just hoping the next movie in the series, The Subtle Knife feels it can slow down a bit and give us some more of the connective tissue so we can get familiarized with some of the other characters.