While the concept of Blindspot is somewhat familiar, the addition of the mysterious tattoos makes it a little unique.  I was intrigued enough to be entertained for the hour and am curious enough to want to see what happens in episode two. 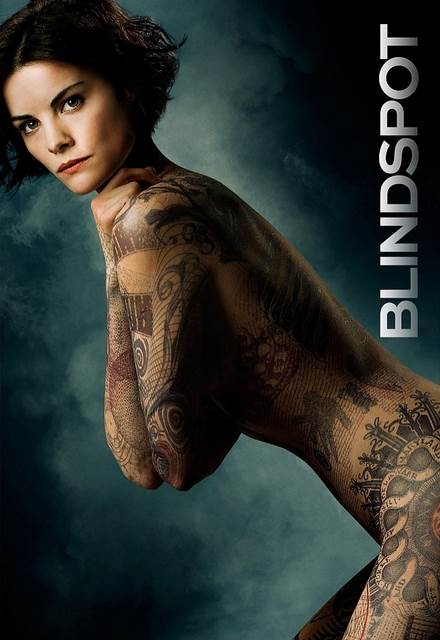 Imagine waking up in a huge duffel bag, naked and tattooed in the middle of Times Square, NYC, with no memory of who you are or how you got there.   That is exactly what happens to Jane Doe (Jaimie Alexander; Thor) in the opening scenes of NBC's new drama, Blindspot.

In the season premier, Jane Doe has been placed in FBI custody because her largest tattoo is the name of FBI agent Kurt Weller (Sullivan Stapleton; 300: Rise Of An Empire), a man she has never met before.  As the tattoos are revealed, we find out Jane Doe can speak Chinese and eventually we learn she knows martial arts and is a trained marksman.

It seems the tattoos are clues to solving crimes, and in the first episode, Weller and Jane Doe do just that when they foil a terrorist plot to blow up the Statue of Liberty.  Doe also has flashes of memories,  which help her to try and remember who she is.  Interestingly, at the end of the episode the audience is given a peak into who Jane may actually be, but not why she made the conscious choice to become tattooed and lose her memory.

While the concept of Blindspot is somewhat familiar (think the Bourne series), the addition of the mysterious tattoos makes it a little unique.  I was intrigued enough to be entertained for the hour and am curious enough to want to see what happens in episode two.  However, this first episode actually left me with more questions than answers though, and some parts are, for now, are confusing.

Alexander does a good job portraying the confused Jane Doe while simultaneously emitting an air of calm and courage often displayed by a special ops forces member.  Stapleton, however, wasn't a good choice in my book, as I found him unemotional and stiff and I have yet to see the chemistry between the two actors.  I hope their relationship evolves (not necessarily romantically) over the next few episodes or I may stop tuning in.

In the end, I can't help but wonder what happens when the FBI runs out of tattoos to exam on Jane Doe's body and, while I'm interested for now, I can see the concept eventually getting old.  All I can say for sure, is that I will be watching next week to try and piece together some more of the story.

Jennifer Broderick
Blindspot has clearly shown what creative writing, determination, and the casting of the right actors can do for a show- bring it an audience that is mesmerized and captivated by the story and sub-plots that clearly exist to support the show.
Full Review | Grade: A