Lionsgate seems to put their all into their movies and the 4k UHD disc shows how much they care about the viewer's experiences. What struck me most is just how impressive the colors and details actually appear in comparison to Snitch’s 1080p HD counterpart, which was still a high quality. 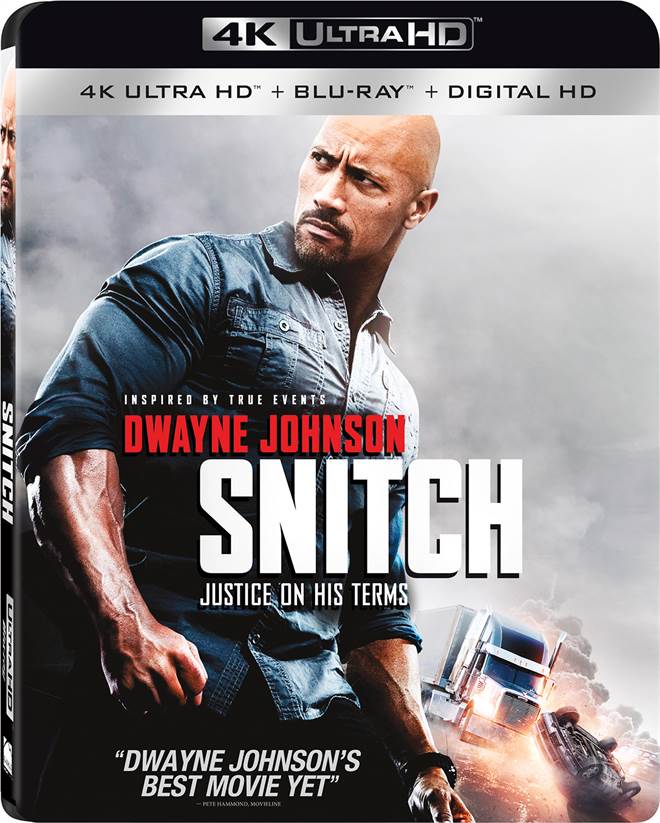 Purchase   DVD/Blu-ray/4K UHD
Lionsgate is "the girl on fire" to use a quote from one of their most successful franchises (The Hunger Games).   Since their start in 1997, Lionsgate productions claims 30 Academy Awards and 122 Academy Award Nominations.   They release over 40 releases annually between Lionsgate and Summit labels and their other six labels and partnerships, including their television acquisitions, such as STARZ.   Since March 2016, Lionsgate has been releasing its blockbuster films in the latest film technology -4K UHD – and picking blockbuster titles to tease audiences into reaching into their pockets and owning these movies and the upcoming release of Snitch is no different.

Snitch is a story about a dad who will do anything for his child and is marketed on the Blu-ray cover as "inspired by true events".   For adult children, it solidifies the fact that we are never too old to need help from our parents and for parents, it reminds us that our parenting never ends, no matter the age of our children.   While the storyline centers on a father who goes undercover to obtain his son's release from prison, it is ultimately the story of a father's unconditional love for his adult child.   Snitch goes far beyond the typical father-son bonding story; it is about a father who will move the universe and sacrifice himself, if needed,  to save his son's future.  Director Roc Roman Waugh (Felon) did a remarkable job directing a solid movie with an impacting storyline.

Dwayne "The Rock" Johnson (The Fate of the Furious; Baywatch) portrays the dad, John Matthews, who believes that his son, Jason (Rafi Gavron, Inkheart), was framed by drug dealers into accepting a package full of Ecstacy that ends up gifting him a 10-year Federal Prison sentence.  Jason, who is offered to turn state's evidence, in exchange for a lighter sentence, isn't able to make that deal with the government, as Jason is simply the patsy.  John makes a deal with the US District Attorney (Susan Sarandon; Thelma & Louise) to help catch some big time drug dealers in exchange for getting Jason a get out of jail card.  Instead of catching some "bad guys" for the government, John and his friend end up getting caught in the government's game of cat and mouse, when the DEA Agent decides to go after the cartel, placing John in a lot more danger than anticipated.

Dwayne Johnson's acting is spot on and he seems every inch the Daddy Bear out to protect his son.  Unlike the multitude of other films in which Johnson has acted, Snitch gave him the opportunity to play the serious, dramatic role, and show the audience that it's not all quick quips and a handsome smile from this actor.   The on-screen acting of the entire cast solidifies the cohesiveness of the storyline and the movie flows easily without disruptions, although the screen is really dominated by Johnson.  It would have been nice to have more of the other actors play more of an integral part of the scenes, but Johnson provides a solid performance that one doesn't find in any way lacking.

Lionsgate seems to put their all into their movies and the 4k UHD disc shows how much they care about the viewer's experiences.  The resolution in this version is 4k UHD with a 2160p.  Aspect ratio is 2.40:1 and uses the encoding of HEVC/H.265. What struck me most is just how impressive the colors and details actually appear in comparison to Snitch's 1080p HD counterpart, which was still a high quality.  From the orange prison outfit to dents on cars to facial features that weren't as bright or clear on the HD disc, the 4K UHD version is an impressive upgrade.  Black levels are consistent throughout the film.  The colors that need to be bright are not animation color and don't distract from the neutral tones the movie gravitates to, as to fit the storyline.   The 4k UHD is a definite upgrade to the previous HD Blu-ray release.

Besides presenting an impressive visual quality, Lionsgate spared no expense upgrading the original HD Blu-ray versions from the pleasant and clear DTS-HD 7.1 to the more immersive experience contained in the English Dolby Atmos track.   The height of the speakers and the realistic sound effects between the cars, helicopters, and sound effects, including the simple dialogue throughout the entire film, draws the audience in and makes them a part of the film.  Even with sound effects and background noises, Snitch's dialogue is crisp and clear without any straining to hear.

Bonus features are always a plus when buying a Home Theatrical Version.  On Snitch's new 4K UHD version, the bonus features are the same as on the previous Blu-ray edition and can be found on both the 4K UHD disc and Blu-ray disc.

The 4K version of Snitch brings the viewers an upgraded version of both the picture and audio quality.   While there are no new or additional bonus features, the ones that are again part of this 4k UHD package are complimentary to the film and provide some background information one wouldn't have just by watching the movie on a streaming service.  Additionally, the fact that Dwayne Johnson steps up his acting ability and shows us the depth of his acting like we haven't previously seen before, is a definite reason for ensuring that this version of Snitch is part of your home movie collection.

For more information about Snitch visit the FlickDirect Movie Database. This release has been provided to FlickDirect for review purposes. For more reviews by Jennifer Broderick please click here.

John Delia
Snitch Is A very good action drama with an important lesson to be learned.
Full Review | Grade: B