Philadelphia brought a dream team of Hanks and Washington together with incredible results.  The film also made an impact on the Nation at a time when one was desperately needed. It is a reminder of how far we have come as a society and certainly should be owned in 4K UHD. 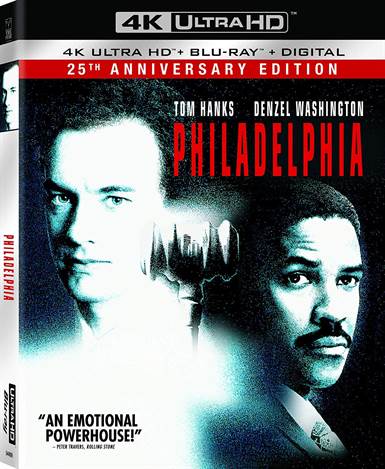 Purchase   DVD/Blu-ray/4K UHD
In the 1980s panic gripped the United States as the HIV and AIDS epidemic reached epic proportions, killing a large part of the gay male population.  For over two decades afterward discrimination against those infected with the disease played a prevalent part in the dialogue of the Country.  In 1993 the first major feature film showcased this discrimination, homosexuality and the disease when Philadelphia was released in theaters. The movie won Tom Hanks (Forrest Gump) his first of two Oscar sand highlighted a significant problem. In celebration of the  25th anniversary of the groundbreaking film, Sony Pictures has now released it on 4K.

Andrew Beckett (Hanks) has been a senior lawyer at the largest law firm in Philadelphia for several years.  He has also hidden his homosexuality for even longer but when he exhibits a Karposi's sarcoma the members of the firm suspect he has AIDS.  Beckett calls in sick for a few days working from home and goes to work after hours leaving an important document that has to be filed in court on his assistant's desk.  When the document goes missing and the filing deadline is missed, the law firm fires Beckett, who suspects foul play.

Beckett decides to sue his former law firm citing discrimination but he can't seem to find a lawyer willing to take his case, including personal Injury attorney, Joe Miller (Denzel Washington; The Equalizer).  Miller, who happens to be homophobic, won't represent Beckett out of fear of contracting the fatal disease.  When Beckett decides to represent himself he ends up at a law library at the same time as Miller who watches as others try to avoid Beckett.  Sensing the same type of discrimination Miller feels like an African American, He decides to represent Beckett.  The trial takes quite a long time and those in Beckett's former firm try to deny being aware of his condition but the truth eventually comes out and Beckett wins the case.  Unfortunately, Beckett dies shortly thereafter.

As mentioned, this is probably some on Hanks' best work garnering him an Oscar for the role. His overt strength and underlying vulnerability give Beckett a duality that is striking and heartbreaking.  Washington compliments Hanks beautifully and the two work together seamlessly.  With a compelling script to work with they offer incredible performances that are worthy of the heady material and the message, they are trying to get across.

The 4K video quality is strong considering the movie is 25 years old.  There are only certain moments when the graininess is distracting but, for the most part, the transfer is well done.  The Dolby Atmos fairs well also within in the constraints of the technology available at the time the film was shot.  The combo pack offers several extras in the Blu-ray disc, though many of them have been released previously.  The extras include: Audio Commentary, Deleted Scenes, Courthouse Protest Footage & Interviews, Original Making-Of Featurette, Theatrical Trailer and the new ones… Featurette Teaser from (Red) and Coca-Cola, One Foot on a Banana Peel, the Other Foot in the Grave, People Like Us: Making Philadelphia, Joe Miller's Macready Shilts Legal Services TV Spot, and Streets of Philadelphia Music Video.

Philadelphia brought a dream team of Hanks and Washington together with incredible results.  The film also made an impact on the Nation at a time when one was desperately needed.  It shined a spotlight on an injustice occurring, not only with the discrimination of AIDS patients in public but with the lack of research and medicine being developed to prevent those effected form dying.  This is a powerful movie that is a reminder of how far we have come as a society and should certainly be owned in 4K UHD.

Download Philadelphia in Digital HD/4K from the iTunes store.

For more information about Philadelphia visit the FlickDirect Movie Database. This release has been provided to FlickDirect for review purposes. For more reviews by Allison Rose please click here.