Home / Reviews / News of The World

Hanks is great, Zengel is a revelation and Greengrass provides incredible vistas and a heartwarming story. 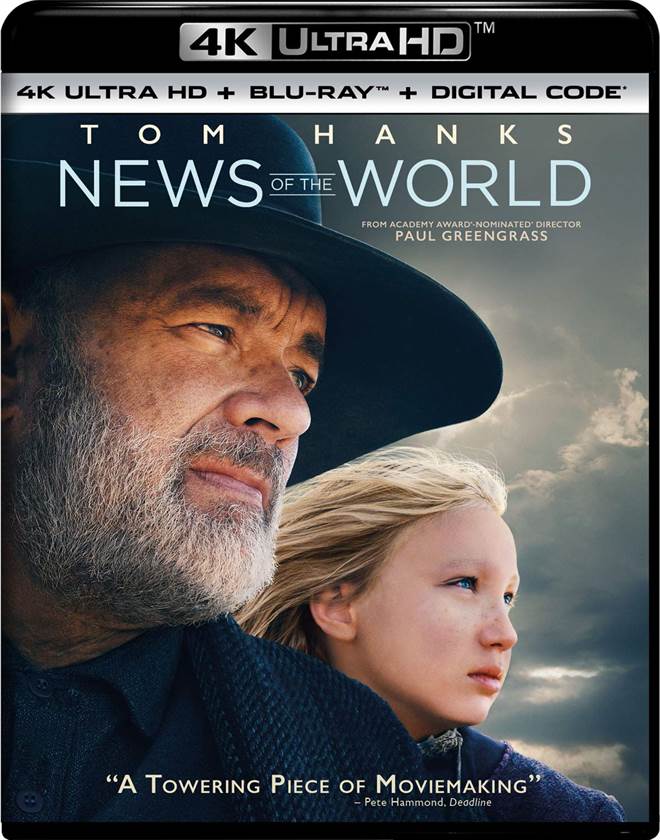 In 2016 author Paulette Jiles (Lighthouse Island) published a western-themed novel called News of the World. The book became a finalist for the National Book Award for fiction.  Shortly after a bidding war ensued, with Fox 2000 Pictures obtaining the movie rights in 2017.  However, after Disney acquired Fox, the film was moved to Universal Pictures instead.

Before the studio change, director Paul Greengrass (The Bourne Ultimatum) was hired to not only direct but to rewrite the screenplay as well.  Two years prior to Greengrass joining the project, Tom Hanks (Forrest Gump) was set to play the lead role of Captain Jefferson Kyle Kidd. In August of 2019, Helena Zengel (System Crasher) was cast as Johanna and filming began the next month.  The United States theatrical release was at the end of December 2020 with a Premiere Video on Demand release in January of this year.  Two months later, New of the World has just been released in 4K, Blu-ray, and DVD.

In1871 Captain Kidd finds himself as a wanderer of sorts, traveling from town to town reading the news to anyone with a dime and some time to spare.  While on his journey, he comes across a broken covered wagon and a black man hung from a tree.  He also finds Cicada/Johanna, a girl whose parents were killed by Kiowa Indians.  The Kiowa then took Johanna and made her one of them (think a little like Dances with Wolves).  However, Johanna is found four years later, and a Union soldier is sent to get her and bring her to her only living kin, an Aunt and Uncle.

After the ambush where the soldier was murdered, Kidd is suddenly charged with taking Johanna to the next town and turn her over to the Bureau of Indian Affairs.  Once there, he is told the representative won't be back for three months and, when asked what he should do, he is told to take the girl to her family himself.  Thus begins their hazardous adventure through the hostile, confederate state of Texas.

Hanks is the consummate actor, making each character his own.  Therefore, it is difficult to upstage him or steal his scenes but preteen Zengel manages to do it every time they are on screen together.  Her portrayal of the kidnapped girl who was taken at such a young age is ripe with almost every emotion from anger and fear to confusion, acceptance, and even rare moments of happiness.  The supporting cast is terrific as well but since the film is mostly Kidd and Johana traveling together, their performances make up the bulk of the screen time.  They work together flawlessly helping to create a connection between the two from almost the moment they meet.

Thanks to Greengrass, the 2160p high-definition video offers viewers an expansive and glorious view of the various aspects of the Texas terrain.  Even when the landscape is desert-like and dusty, the audience can still feel the richness of the land.  The Dolby Atmos audio creates a delicate balance between the dialogue and the soundtrack. Ambient noise and exploding gunshots are layered and full of depth.  The extras are a little light and include: deleted scenes, Partners: Tom Hanks & Helena Zengel, Western Action, Paul Greengrass Makes News of the World, The Kiowa, and audio commentary.

While News of the World has moments that move extremely slow, it is a good old-fashioned western with themes of emotional healing, trust, and friendship.  Well written, beautifully shot, and expertly acted, one need not be a fan of the western movie genre to appreciate the film.

Hanks is great, Zengel is a revelation and Greengrass provides incredible vistas and a heartwarming story.  What's not to like?

Purchase a DVD/Blu-ray/4K UHD physical copy of News of The World today at Amazon.com

Download News of The World in Digital HD/4K from the iTunes store.

Listen to the News of The World soundtrack on Apple Music.

For more information about News of The World visit the FlickDirect Movie Database. This release has been provided to FlickDirect for review purposes. For more reviews by Allison Rose please click here.

News of The World images are © Universal Pictures. All Rights Reserved.

Read More Reviews For News of The World