De la Reguera is the heart of this film as she fights for her life trying to get into American and then, ironically, trying to get back out. 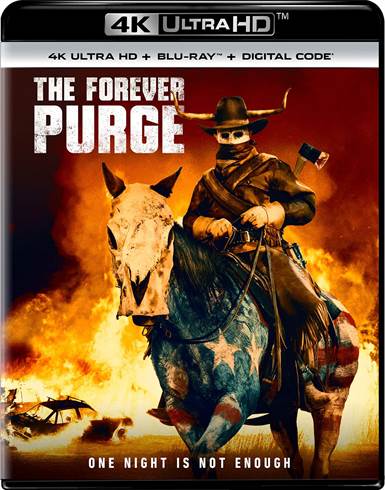 There is a divide in this country that, while it has always been just underneath the surface, has now reared its ugly head.  About seven years ago, the atmosphere in the United States changed and hatred for anyone or anything that was "different "was no longer considered unacceptable.  Instead of lurking in the shadows, racist groups were suddenly vocal and more mainstream thanks to encouragement from prejudice National leaders.

The Purge franchise decided to explore the idea of what would happen if these groups took the purge to the next level. Delayed because of the pandemic, The Forever Purge finally was released in theaters in time for the Fourth of July weekend this year.  Ten weeks later the film is now being released for purchase on 4K, Blu-ray, DVD, and Digital Download.

Adela (Ana de la Reguera; Army of The Dead) and Juan (Tenoch Huerta; Days of Grace) are a married couple who illegally cross the border from Mexico into Texas to escape from a drug cartel.  Eventually, they find work, her in an industrial kitchen and him as a farmhand at the Tucker Family Ranch.  On the night of the annual purge, they pay to take refuge in a warehouse protected by armed guards.  Twelve hours later, they emerge having survived their first purge in America.

However, some people refuse to end the purge, calling themselves the Purge Purification Force (PPF).  Around the country, these individuals are still killing anyone who they consider to be non-American even though the purge was supposed to have ended.  At the Tucker Ranch, some of the farmhands take Caleb (Will Patton; Armageddon), Dylan (Josh Lucas; Ford v Ferrari), Cassie (Cassidy Freeman; Smallville), and Harper (Leven Rambin; The Hunger Games) hostage.  Juan and one of the other workers manage to free them and they, along with Adela, leave to try and cross the border into Mexico looking for asylum.

De la Reguera is the heart of this film as she fights for her life trying to get into American and then, ironically, trying to get back out.  She and Huerta have good chemistry making them a believable couple.  Lucas is good, especially when trying to protect his pregnant wife, while Rambin, as his sister, portrays a "take no prisoners" type of person.  Patton is the stern but gentle soul who makes a great sacrifice for his children and his unborn grandchild.

Visually, The Forever Purge looks excellent.  The expansive ranch offers a picturesque view of Texas, while Adela's and Juan's home depicts the lower-income areas.  There is plenty of gore and blood splatter throughout the movie and the 2160p resolution shows the viewer every droplet as it falls.  Making his American directorial debut, Everardo Gout uses both close-ups and wide vistas effectively.  Stunts are well-coordinated, and the scenery and costumes look authentic.

The Dolby Atmos audio effectively makes the viewer feel as though they are a part of the action.  With gunshots echoing in every direction and police sirens wailing in the background, the audio is fully immersive, offering the audience an enhanced auditory experience.  The dialog is clean and clear despite so many other sounds erupting all around the actors.

While the alternate opening is more of an extended scene that should have been included in the film, it is nice to see some of Adela and Juan's backstory.  Creeptastic Wardrobe is a short discussion with Costume Designer Leah Butler. The rest are interesting enough to watch at least once.

The Forever Purge is a great way to wrap up the franchise that began eight years ago with the idea of what would happen if crime was legal for 12 hours once a year. Unfortunately, The Forever Purge offers a glimpse of the current climate in this country and what could happen if we don't get things back under control.

Purchase a DVD/Blu-ray/4K UHD physical copy of The Forever Purge today at Amazon.com

Download The Forever Purge in Digital HD/4K from the iTunes store.

Listen to the The Forever Purge soundtrack on Apple Music.

For more information about The Forever Purge visit the FlickDirect Movie Database. This release has been provided to FlickDirect for review purposes. For more reviews by Allison Rose please click here.

The Forever Purge images are © Universal Pictures. All Rights Reserved.