Futurama: Volume 8 seems to wrap up some pressing plot elements while leaving the door rather widely open for any future reboot. Even if this series has "only" nine lives, it probably hasn't used up more than four or five. 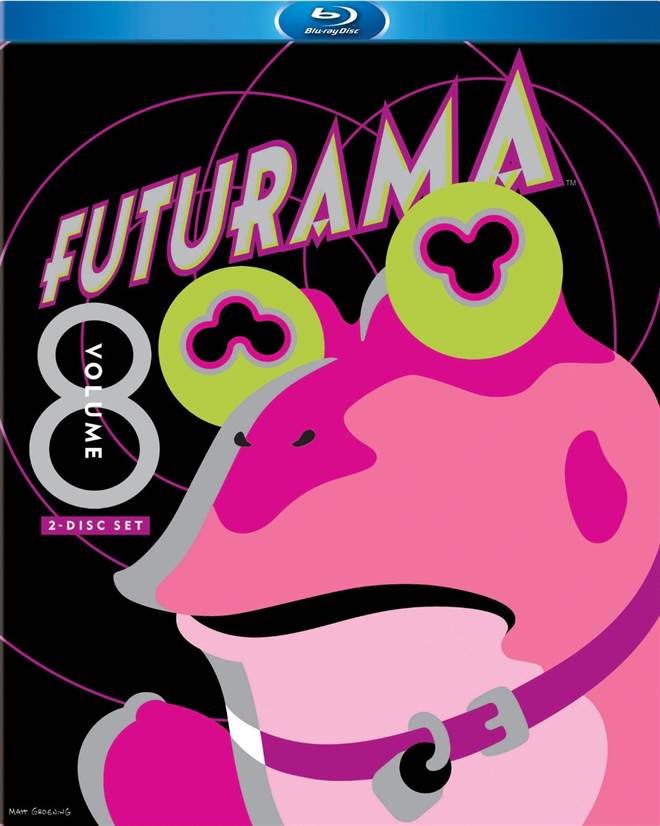 Purchase   DVD/Blu-ray/4K UHD
Will Futurama rise from the ashes again—again? As fans of the series know, Matt Groening's follow up to his immense global phenomenon The Simpsons has had a rather bizarre, roller coaster-esque ride on various networks, petering out after a mere four seasons in its original broadcast run on Fox (contrasting with the still running Simpsons franchise, well into its third decade of episodes), after which it settled into a comfortable syndication run on Cartoon Network. The show in fact did so well in syndication that four direct to video features were commissioned, which then were chopped up into episode length bits and combined with the already existing syndication package of the four Fox seasons, which then took up residence on Comedy Central. Once again, this show which refused to die drew in audiences in large enough numbers that Comedy Central offered it another lifeline, ordering another batch of episodes which the network doled out in smaller than typical doses, allowing new episodes to air over the course of several years, interspersed with reruns. Comedy Central announced that the final batch of new episodes which ran in early 2013 would be the last new episodes it would produce, but it's wise not to count Futurama completely out yet, especially since Groening is on record saying there may be other fish to fry, or perhaps Fry to fish (sorry). The series has always had the same intellect that has defined The Simpsons for much of its run, but Futurama is perhaps more consistently snarky than its predecessor, with a dysfunctional group of main characters that make the Simpsons clan seem almost together by comparison at times—almost being the operative word. While this latest (it's probably silly to claim it will be the last) edition of Futurama episodes bears the soubriquet Volume 8, it is in actuality the second "half" of the so-called (and probably confusingly named) season 7, which was split into two half-season length runs on Comedy Central over the course of about a year from June, 2012 to September, 2013.

The 13 episodes in this collection are:

Forty Percent Leadbelly: Bender, one of the more unlikely characters to indulge in hero worship (unless he's thinking about himself, that is), meets his idol, a famous folksinger who's spent most of his life in jail. Bender enlists the aid of a scientist to copy the guy's one of a kind guitar, and mayhem ensues.

2-D Blacktop: Professor Farnsworth gets stuck in a kind of version of "Flatland" when he takes up with a bunch of street racing delinquents.

T.: The Terrestrial: This is a cute flip side of E.T.: The Extra-Terrestrial, with Fry being the "terrestrial" who gets left behind on an illicit scouting mission to Omicron Persei 8 for what sounds suspiciously like "the demon weed".

Fry and Leela's Big Fling: Futurama often follows The Simpsons template by including two simultaneously unfold plots, and this episode is a perfect example, although things are woven together rather ingeniously (and hilariously at the end). The first part of the story has to do with Fry and Leela trying to find a secluded hideaway for a little "snuggling" (as Marge Simpson might say), while the second deals with a kind of homage to Planet of the Apes. Yes, these two disparate elements do collide at the conclusion.

The Inhuman Torch: Bender realizes yet another lifelong dream when he becomes a firefighter (considering how much he drinks, he's probably fairly flammable himself), but as might be expected, his career goals go seriously awry, which may in fact lead to the planet's demise.

Saturday Morning Fun Pit: This is one of the highlights of this season, at least for those of us who grew up with certain cartoons on Saturday morning. In a kind of sibling episode to The Simpsons' annual Treehouse of Horror outings, the main characters appear in a highly skewed trio of versions of cartoon series of yore.

Calculon 2.0: Bender takes a page out of the Frankenstein playbook and digs up the remains of Calculon, his favorite robotic soap opera actor. Rather ironically for a soap opera, the rebooted Calculon finds that time has moved on.

Assie Come Home: Bender is looted by a street gang on a planet full of bad guys, with very little left by the time they're through. High on his list to reclaim is his butt, which it turns out is being used in a lighthouse.

Leela and the Genestalk: Leela undergoes a strange metamorphosis, suffering from a syndrome called squidification, and begins looking for a cure. Fry's attempts to help end up playing out like a crazy version of Jack and the Beanstalk. Unfortunately, the beanstalk leads Leela to the ever machinating Mom.

Game of Tones: It may not exactly be the denouement of The Lady Vanishes crossed with Dreamscape, but the gang penetrates Fry's dreams to figure out the meaning of an ancient alien song.

Murder on the Planet Express: No, it's nothing like Agatha Christie, but instead a kind of "locked door comedy" when the crew finds itself trapped aboard the spaceship with a terrifying alien during an ostensible "team building" event.

Stench and Stenchibility: Zoidberg finally gets his chance to take the spotlight for a while in this episode, when he falls in love with a flower salesperson who doesn't mind his overpowering aroma. Meanwhile, Bender decides he's born to dance, and enters a tap dancing competition where he squares off against a sweet little girl.

Meanwhile: Fans have waited a long time for Fry and Leela to finally tie the knot. Unfortunately, Professor Farnsworth's latest invention keeps mucking up the works.

Futurama: Volume 8 is presented on Blu-ray by 20th Century Home Entertainment with an AVC encoded 1080p transfer in 1.78:1. This is another nicely sharp and well detailed high definition presentation of this native HD series. Line detail is precise and stable and the palette is expectedly vivid and brilliantly saturated. Futurama: Volume 8 features a decently immersive lossless DTS-HD Master Audio 5.1 mix that affords good surround activity when the crew's spaceship is hurtling toward its next destination, or when the bouncy score is providing some spice to the proceedings. But the series never really gets into anything too "showy" here, maintaining an emphasis on the often very funny dialogue, which is always presented very cleanly and clearly.

Special Features:Futurama: Volume 8 seems to wrap up some pressing plot elements while leaving the door rather widely open for any future reboot. Even if this series has "only" nine lives, it probably hasn't used up more than four or five at this point, so considering Matt Groening's pull with various media outlets, it seems likely that Fry, Leela, Professor Farnsworth "and the rest" may be back for more adventures at some unspecified date to come. This final baker's dozen of episodes has its fair share of laughs, with Bender's shenanigans providing the focus for quite a few of the storylines. The supposed consummation of Leela and Fry's long simmering relationship is dealt with in typically funny fashion, but the one thing that may slightly bother some longtime fans is the relative lack of time spent on some of the supporting characters. Still, this "last" set offers great video and audio, the commentaries are hilarious, and the supplementary featurettes are also well done.

For more information about Futurama visit the FlickDirect Movie Database. This release has been provided to FlickDirect for review purposes. For more reviews by Chris Rebholz please click here.