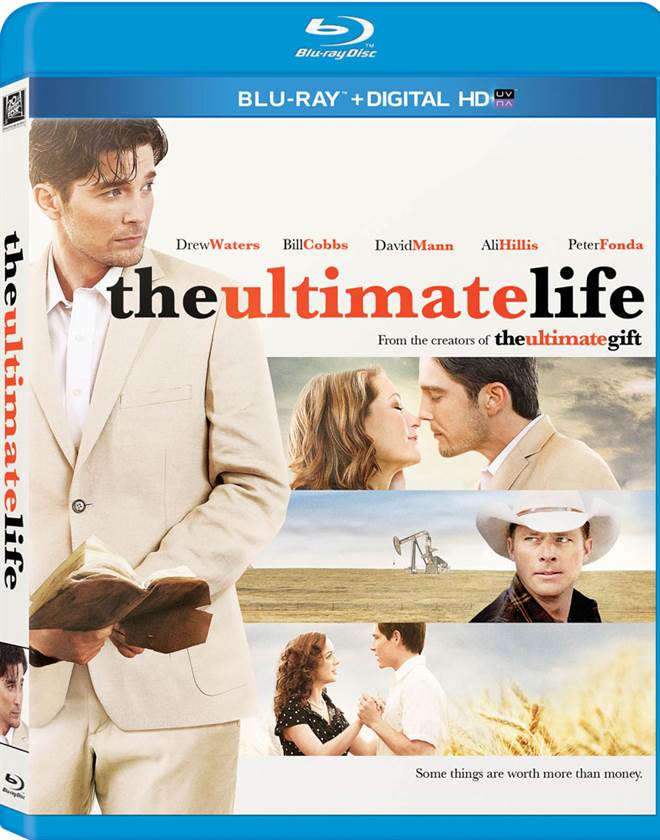 Purchase   DVD/Blu-ray/4K UHD
To give you the reader a decent explanation of the film The Ultimate Life I would need to start by giving you a review of the first film The Ultimate Gift, but I haven't so this review may seem a little out of context at certain points, hopefully that won't bother anyone. The Ultimate Life is the sequel to 2007's faith-based inspirational drama The Ultimate Gift. Given what I've seen of this film I am sure the original is similar in tone, with lots of feel-good (if overly obvious) messages about what money can (oil rigs, big houses) and can't buy (love, happiness), and how it's a person's friendships and family that count as their true legacy, not their monetary fortune. Not exactly The Godfather we're dealing with here and clearly aimed at an audience better suited in the Bible belt than the NY metro area.

THE ULTIMATE LIFE takes place three years after the events depicted in The Ultimate Gift, Jason Stevens (Logan Bartholomew) is juggling being the head of his billionaire grandfather's family foundation, dealing with a lawsuit from his greedy relatives, and wanting to marry his girlfriend, single mom/nurse Alexia (Ali Hillis). When Alexia takes off to work for a charity overseas, Jason is despondent until family friend Hamilton (Bill Cobb) gives him his late grandfather's journal to guide him. The journal chronicles Red's rags-to-riches story from poor Louisiana ice delivery boy to rich Texas oilman. Inspired by Andrew Carnegie, Red sets out to make a fortune, only to discover that being a billionaire isn't what truly makes him rich.

THE ULTIMATE LIFE is the kind of inspiring, feel-good, mildly sermonizing movie that would feel at home either as a Hallmark special or (if it had more overt references to God and scripture) as a Sunday School presentation. In those contexts, the movie provides exactly what you'd expect: a simple storyline with heartwarming lessons for men about how to be a good husband, father, friend, and man. But unless it's the object of a church-approved outing, the movie, directed by Michael Landon Jr., isn't nuanced or entertaining enough to merit the price of admission.
With its predictable plot and uneven acting (the cast includes quality veterans in small roles and a couple of unimpressive newcomers in bigger parts); The Ultimate Life suffers from being an uninteresting movie with an uneven plot that winds up talking down to its audience. This flashback to Red's ambitious journey to becoming a self-made man is far from Citizen Kane. It's just a corny portrayal of how money is great, but it's not what brings lasting happiness. Now don't me wrong, many films have similar messages and we laud them till the cows come home, but that's because when a film is done right you don't mind hearing the same message again. The Ultimate Life though fails at conveying that message and you're left with feeling frustrated at having given your time to it. Or at least I was.

The Ultimate Life is presented on Blu-ray by 20th Century Home Entertainment with an AVC encoded 1080p transfer in 1.78:1. This is a nice sharp and well detailed high definition presentation of this film. Line detail is precise and stable and the palette is expectedly vivid and brilliantly saturated. The Ultimate Life features a decently immersive lossless DTS-HD Master Audio 5.1 mix that affords good surround activity. But the film never really gets into anything too "showy" here, maintaining an emphasis on the dialogue, which is always presented very cleanly and clearly.

Special Features:While The Ultimate Life doesn't offer up anything new story wise or give audiences anything new to think about via its message, it does an adequate job of telling a tale of a man, given a unique opportunity and learning how to cope with those circumstances via some advice from his grandfather. The best parts about this film are the solid video and audio quality, but that's more thanks to the power of Blu-ray. So if you're looking for something to watch that may surprise you, best to skip over this film and look elsewhere, nothing new here.
Cast:
Directed By:
MPAA Rating: PG