Home / Reviews / Metallica: Through the Never

Metallica: Through the Never (2013) Blu-ray Review

"Through the Never” is quite a ride, and Metallica fans are rewarded with several teeth-rattling performances. 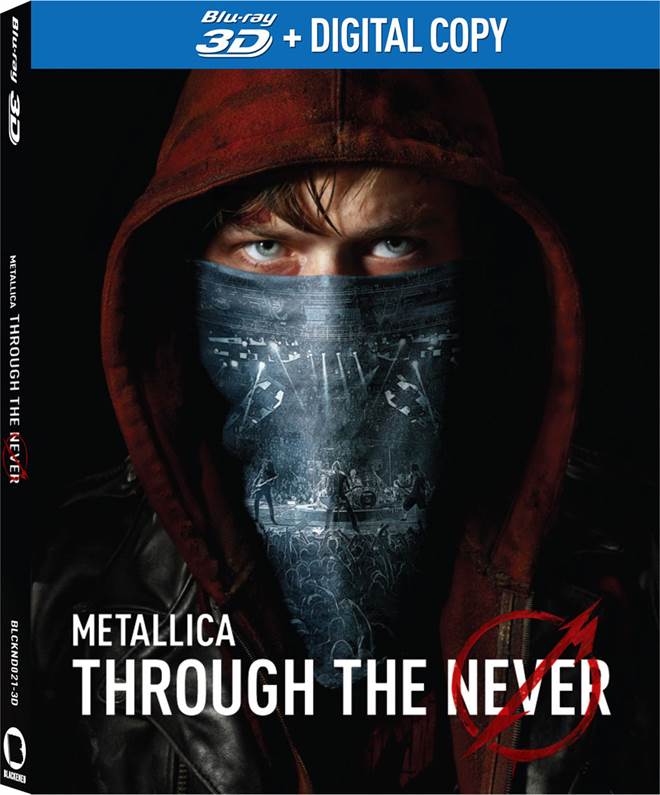 Purchase   DVD/Blu-ray/4K UHD
It's tough out there for a concert film these days. Ever since Miley Cyrus brought Hannah Montana to box office gold in 2008, Hollywood has been chasing the big money with efforts devoted to The Jonas Brothers, Katy Perry, Justin Bieber, and One Direction. The genre receives a much needed kick in the behind with "Metallica: Through the Never," a blistering performance picture that blends riotous stage action with an actual street riot, while asking fans to digest a heaping helping of surreal imagery. Its buzz saw execution is magnificent, making sure the audience exits the theater with melted brains and blood pouring out of their ears, but director Nimrod Antal ("Predators," "Vacancy") leaves the movie with more than a few question marks, which probably isn't the best course of action to take when dealing with such a blunt cinematic instrument.

In the heart of a silent city, Metallica is about to perform to a sold out audience at the local arena. While James Hetfield (vocals/guitar), Lars Ulrich (drums), Kirk Hammett (guitar), and Robert Trujillo (bass) prepare for the gig in their own special ways, a young, skateboarding roadie named Trip (Dane DeHaan) is given a mission, tasked with taking a tank of gas across town to a truck stranded in the middle of nowhere. As Metallica plays a career-spanning set list of songs to a thunderous crowd, Trip finds himself in the middle of chaos. Bloodied, bruised, and bewildered, Trip faces a war zone where cops are attempting to contain a pack of vicious rioters, trying to remain unharmed as the night wears on and his chances for survival dwindle, soon threatened by a masked maniac on a horse known as The Rider.

That there's a dramatic element to "Through the Never" is a bit of a surprise. Instead of capturing a live show in a traditional fashion, Metallica and Antal elect to break up the stage event with sequences that follow Trip into an urban Hell, watching the young man suffer through a car accident and near-misses with The Rider, trying to avoid the rioters to the best of his ability while still making his way to the stalled truck. It's a silent role, leaving DeHaan with only his expressions to help communicate panic levels, doing a fine job with pained and baffled looks while Antal packs the frame with nightmare components, carefully bending reality to a point where the whole thing goes topsy-turvy.

"Through the Never" doesn't make any sense, which could anger certain viewers who've become invested in Trip's gas can quest. Instead of a straightforward survival story, Trip's riot saga takes a few hallucinatory turns involving self-immolation as self-defense, a living puppet, and the acquisition of a special bag with contents the audience isn't allowed to see (think the golden briefcase in "Pulp Fiction"). Trip tussles with The Rider as well, smashing an entire city with the ghoul's gory hammer, flattening the metropolis as Metallica performs nearby, with the bedlam eventually spilling into the arena. "Through the Never" isn't meant for interpretation, asking only to be experienced as a sound and light show with occasional flashes of violence and mischief (when we first meet Hammett, his guitar is bleeding). However, the film's lack of clarity might leave some viewers baffled, wondering why Antal and Metallica even bothered in the first place.

The concert sequences are cruelly chopped up to make room for the Trip subplot, but the Metallica in "Through the Never" is a little older and wiser, working with the audience as they bulldoze through catalog highlights (2003's "St. Anger" is unrepresented, but perhaps the band shared everything they needed to concerning this release in the documentary "Some Kind of Monster"), creating frequent call-and-response opportunities as they perform "Creeping Death," "The Memory Remains," and "For Whom the Bell Tolls." Spread out over an enormous stage that doubles as a video screen, the band works the cameras in full, showcasing Hetfield's furious front man attitude, while Ulrich sells his close-up time with a type of elastic grimacing normally associate with the passing of a kidney stone. Antal and the band make the most of the film format, with plenty of stage props to dodge playfully, most representing iconic album art, while a few dirty tricks are pulled, faking accidents to keep up the element of surprise.

Asside from the amazing 3D presenation of the film. The Blu-ray is packed with features:"Through the Never" is quite a ride, and Metallica fans are rewarded with several teeth-rattling performances, including an intimate run-through of an early "Kill ‘Em All" headbanger, "Hit the Lights." The end credits also deliver a goody bag as the band gathers on an empty stage to perform one of the highlights off the "Master of Puppets" album, the instrumental "Orion." The unreal appetites of the picture are certainly distancing, perhaps the wrong creative path to take, but those with a more relaxed attitude, blessed with an appreciation for artful insanity, should find "Through the Never" to be a fantastic, eye-popping ride of metal and madness, branded with some serious Metallica fury.
Cast:
Directed By:
MPAA Rating: R

For more information about Metallica: Through the Never visit the FlickDirect Movie Database. This release has been provided to FlickDirect for review purposes. For more reviews by Chris Rebholz please click here.

Metallica: Through the Never images are © Picturehouse. All Rights Reserved.

John Delia
A ‘metal’ experience for those who like their music loud and lyrics outspoken.
Full Review | Grade: A