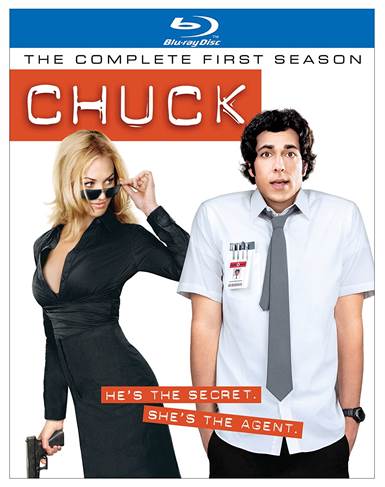 Editor's Note:
Non-format-specific portions of this review also appear in our DVD review of Chuck: The Complete First Season.

"Chuck" is a smart comedy.  In essence, a parody of the spy genre, "Chuck" knows not to take itself too seriously while at the same time delivering serious action, drama, intrigue; and at the end of the day, one satisfying hour of television!  A hero of the everyday nerd, Chuck is the regular guy next door who knows how to fix your computer but yearns for something more.  A James Bond for the post 9/11 world, Chuck is not, but it is what he is asked or rather chooses to become.

Chuck Bartowski (nerdy, yet lovable Zachary Levi ) is in a rut, having been kicked out of Stanford and working as a Manager of the "Nerd Herd" at "Buy More" (a clear satire of the Geek Squad at Best Buy).  He is in search of something more for his life.  His sister (Sarah Lancaster), with whom he lives, thinks that "something more" will come in meeting the girl of dreams -- something Chuck has a hard time with.  He is always thinking about the one that got away and his awkward social skills inherent with being the Manager of a Nerd Herd.

It seems in college, Chuck's roommate/nemesis Bryce Larkin (aptly described as "Fett to Chuck's Solo") got Chuck kicked out of college, stole his girl, and otherwise destroyed his life.  Bryce goes on to become a rogue spy for the CIA and is successful in stealing and then deleting all of the U.S Government secrets from what is known as "The Intersect".  Post 9/11, all government agencies began sharing their data in one central location -- "The Intersect".  Before he can escape, Bryce emails the data to Chuck (for at this point unknown reasons) and is then shot, presumably dead. Chuck receives the email which subliminally downloads all of the data into his brain, effectively making Chuck the only "computer" with data of all government secrets/intelligence. Chuck receives "flashes" of intelligence when seeing something that sparks a visual cue of pieces of related data, and thus, can solve international crimes or at least point federal agents in the right direction (sometimes comically in the wrong direction).

Enter the agents:  Chuck, not fully understanding his newfound "ability" is now the target of the U.S. Government as he holds all of its secrets and intelligence.  The NSA sends career killer Major John Casey (played by a stone-faced yet comical Adam Baldwin), while the CIA sends Agent "Sarah Kent" (played by the beauty, being an understatement, Yvonne Strahovski) to retrieve the data in any way possible.  Once they learn that Chuck holds the secrets in his brain during an intense rooftop, guns pointed at each other standoff, they use his flashes to defuse a bomb and save a visiting head of government.

To protect Chuck (or are they simply protecting the intelligence), the agents get jobs at the Buy More and "Weinerlicious" (a hot dog stand) as cover.  Sarah also becomes Chuck's "fake" girlfriend (yet the chemistry between the two is so palpable you know a relationship is inevitable) at the celebration of Chuck's sister.  The series deals with the interpersonal relationships between all the characters in their outrageous situations which are at the same time funny as they are entertaining.  There is a distinct tone to the show which can be described as everyman meets James Bond with a hint of side jabbing comedy on the side.

As with Supernatural this month, Warner Bros has released Chuck the Complete First Season on Blu-ray, and while the Supernatural title seemed to be transferred over with care, unfortunately, the same cannot be said with Chuck.

The transfer of Chuck to Blu-ray seems to have gone off at the transferring studio.  The picture is extremely grainy, with colors that are a bit muddled.

Unfortunately, the big issues that FlickDirect had with Supernatural Complete Third Season Blu-ray also happens on this Blu-ray release -- the menu system. Each disc has all episodes on the same track leaving out any hope of jumping to a favorite scene from a single episode.

Although overall, the Chuck Blu-ray transfer is still miles better than the standard DVD edition; it has an exceptional Dolby Digital soundtrack and a picture that with all said and done is worth the extra money to purchase.

Entertaining and smart comedy, wrapped in a package of international espionage and everyday interpersonal relationships, Chuck is a hit that delivers and one Blu-ray set you will want for your collection.

Download Chuck: The Complete First Season in Digital HD/4K from the iTunes store.

Listen to the Chuck: The Complete First Season soundtrack on Apple Music.