It appears DC Comics wanted to give a more Batman type heroic character than being true to the comic book. While this does work on screen, it divides the type of Green Arrow character it’s fans enjoy. 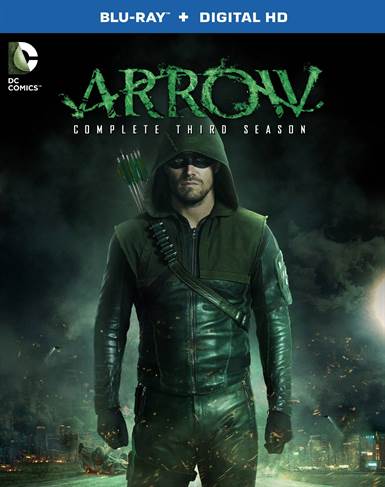 Purchase   DVD/Blu-ray/4K UHD
Starling City's favorite masked hero is back in season three of the hit CW television show, Arrow. The Green Arrow and his friends are back to battle the forces that would do harm to the city he is sworn to protect.

Aside from the "villain" of week motif that usually plaques these type of shows, this seasons main "badie" is a character that actually never met the Green Arrow in the DC comic book universe; legendary Ra's al Ghul and the League of Assassins, who are normally associated with Batman.

Style wise, not much has changed with the show. DC Comics has created a darker version of Green Arrow than what was last found on Smallville. It appears DC Comics wanted to give a more Batman type heroic character than being true to the comic book. While this does work on screen, it divides the type of Green Arrow character it's fans enjoy. One of Season's Three's downfalls seems to be the breakdown of the normal Superhero genre that most people are familiar with. Instead of keeping things simplistic and focusing on the main hero and villains of the show, Arrow has gone for an Avengers type approach and has made everyone and their brother either Oliver Queen's sidekick or a masked villain with a bow and arrow. Aside from this, almost every week there is someone new learning Oliver's secret identity, which kills the concept long ingrained in the creation of a superhero character (excluding Tony Stark).

The actors on Green Arrow have always been one of the stand out elements that has propelled the show into the success it has been, and Season Three is no exception. While I had initial doubts about Stephen Amell (Teenage Mutant Ninja Turtles 2) taking over the reigns of Green Arrow from Smallville actor Justin Hartley, he has truly made the role of Oliver Queen his own, and simply embodies the character. His presence alone can easily carry the show. The main cast of supporting characters that have grown into their own through the seasons also continue to shine along with newcomers Brandon Routh (Ray Palmer), Karl Yune (Maseo Yamashiro), Rila Fukushima (Tatsu Yamashiro), Katrina Law ( Nyssa al Ghul), and Matt Nable (Ra's al Ghul).

The 1080 AVC encoding on the Blu-ray is a mixed bag. Daytime shots and sharp and clear, while the nighttime shots sometimes have way to much grain, but, at other times, have great clarity. One thing that is consistent during the presentation is that the colors are vibrant, as well as the green hue that purposely covers the entire show production.

The special features for Arrow Season Three are mostly contained on the final disc of the set, and contain a few curious choices. Instead of inlcuding a feature explaining the interesting choices done this season, such as bringing Batman's Ra's al Ghul and the League of Assassins into the show, we are treated with a feature about Ray Palmer's Adam suit, a look at the lair of Ra's al Ghul, Creating the Uniforms of Arrow, Comic Con 2014 Panel, and a gag reel.

While Arrow is a very entertaining show that occasionally borderlines on the absurd, this Warner Bros. presentation of it's third season is not up to the usual Warner Bros. Home Entertainment standard. Between the sub-par video at times, and the almost non-existent special features, this set it truly only for the die hard fans of the series.

Download Arrow: The Complete Third Season in Digital HD/4K from the iTunes store.

For more information about Arrow visit the FlickDirect Movie Database. This release has been provided to FlickDirect for review purposes. For more reviews by Nathan M Rose please click here.