Home / Reviews / The Lair of the White Worm

The single-disc package comes with enough extras to justify the price tag and any fans of Ken Russell will truly appreciate hearing the audio commentary. 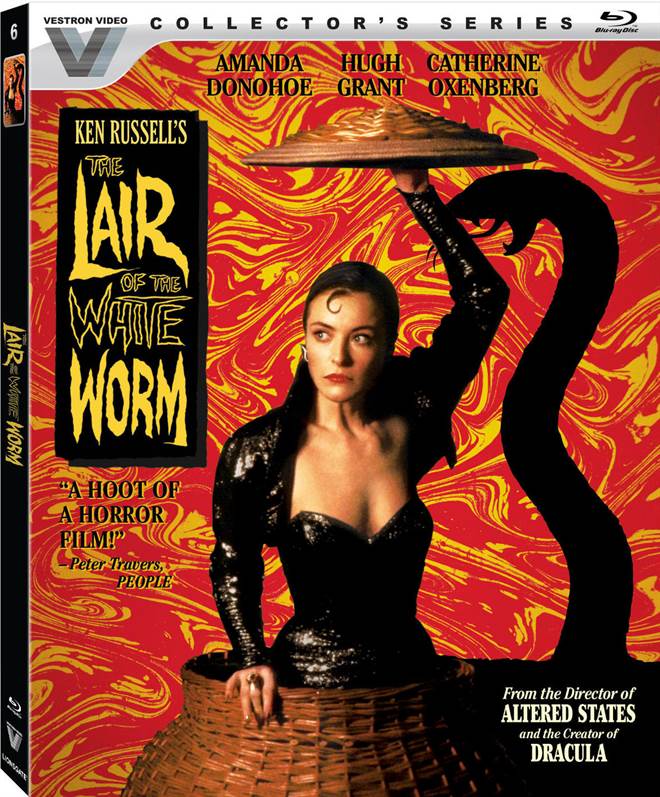 Purchase   DVD/Blu-ray/4K UHD
The Lair of the White Worm, based on the Novel by Bram Stoker and Directed and adapted for the screen by Ken Russell (Altered States).

The film takes place in the Peak District of England, where a young Archeologist named Angus Flint (Peter Capaldi; Doctor Who) uncovers a strange skull buried in the yard of the Bed & Breakfast where he is staying. The B&B is owned by the Trent sisters, Mary (Sammi Davis; Four Rooms) and Eve (Catherine Oxenberg; Starship Troopers 3: Marauder).

Intrigued, Flint soon learns about the local legend of the d'Ampton family and how their ancestor, centuries before, slew The White Worm or Dragon, of Stonerigg Cavern.  Soon, people begin to disappear and it coincides with the return of Lady Sylvia Marsh (Amanda Donohue; Stardust)  but it is no coincidence, as she is in actuality an Immortal Priestess to the Snake-God Dionin and she is hungry for human flesh and blood. When the pocket watch of the Trent sisters' father is found in the cavern, miles from where he was supposed to have disappeared, James d'Ampton (Hugh Grant; Florence Foster Jenkins) believes the Worm may yet still live.

This movie holds up well and is one of Ken Russell's best black comedies. I found myself appreciating it more today than when I first watched it in 1989, especially appreciating Amanda Donohue's performance as she gleefully attacks one victim after another.  I especially enjoyed her character's weakness for music, and the trance-like state in induces. It has to be seen to be appreciated.

On to the specs. The restored and remastered film (with a few exceptions) looks great with a clean and bright, 1080p transfer in 1.78:1 and features a DTS-HD Master Audio 2.0 which sounds great, especially during the d'Ampton party where the band plays a real English Folksong about a "Worm".

The single-disc package comes with enough extras to justify the price tag and any fans of Ken Russell will truly appreciate hearing the audio commentary.  He sounds so amiable, it's hard to believe his reputation of being a blustery and controversial figure.

All in all, I would recommend this one, especially if you are a fan of Ken Russell's other works and need to have this to round out your collection. It is definitely a fun horror film you can sink your fangs into.

For more information about The Lair of the White Worm visit the FlickDirect Movie Database. This release has been provided to FlickDirect for review purposes. For more reviews by Leonard Buccellato please click here.

The Lair of the White Worm images are © Vestron Pictures. All Rights Reserved.