Home / Reviews / Girl With All The Gifts

While this is a typical zombie movie, I like that the plot incorporated a few new concepts into the story. 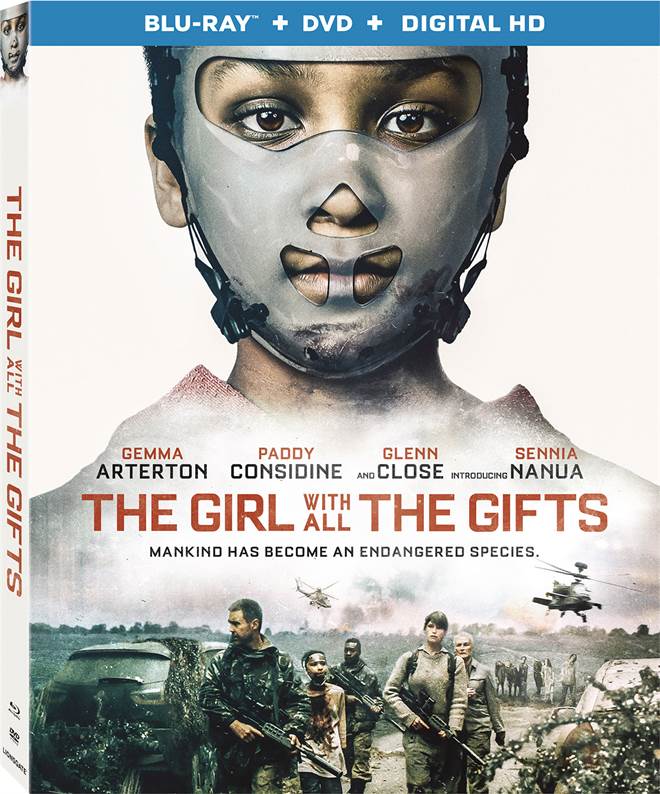 Purchase   DVD/Blu-ray/4K UHD
Everything's coming up zombies right now and zombie movies are a hot commodity.  We've seen it countless times now, where an epidemic sweeps the world and people turn into soulless, brain-eating creatures terrorizing those that are still human. While The Girl With All the Gifts encompasses some of those ideas, there is so much more going on with a few plot twists that ultimately leads the characters to embrace their fate instead of fighting and defeating the creatures.

Instead of a virus, this time the disease is a fungus that takes over the host's body and turns them into zombies.  Interestingly, though, the second generation of these things seem human and can learn and speak just like normal people.  The uninfected have a group of the so-called second generation in an underground bunker in a secure location.  This is where we meet Melanie (Sennia Nanua; Beverly). Every morning, she is strapped to a wheelchair and taken with about 20 other students to a room to learn and be observed.  She is really a zombie but can control her impulses until she smells human flesh.

Dr. Caroline Caldwell (Glenn Close; Guardians of the Galaxy) studies these beings and experiments on them in order to find a cure.  Just as she is about to make a breakthrough, the zombies infiltrate the compound and she, along with Melanie and the teacher Helen (Gemma Arterton; Quantum of Solace) plus a few soldiers, are forced to flee and make their way through the dangerous city streets.  Once there, they encounter the regeneration of the disease and realize it will eventually become air born and infect anyone left.  After trying to scavenge for food and losing members of their team, including Dr. Caldwell, Melanie takes matters into her own hands and decides to make a new reality for everyone.

While this is a typical zombie movie, I like that the plot incorporated a few new concepts into the story.  The second generation that appears normal is an interesting twist, as well as the idea that the fungus evolves and will eventually be in the air ostensibly affecting anyone left who is still "untouched".  I also liked the idea that Dr. Caldwell is looking for a cure while Melanie eventually changes the game for the entire world.  Mike Carey (Shadow of the Elves) does a wonderful job adapting his novel giving the audience some ideas to chew on (pun intended) and seeing the zombie apocalypse in a new light.

Arterton is fine as the caring and somewhat sensitive school teacher trying to keep Melanie and the others alive. Nanua is excellent for such a young, inexperienced actor.  She plays Melanie with maturity and intelligence and she fits well with her more seasoned colleagues.  Of course, Close is first-rate but, frankly, I wouldn't expect any less from her.  She always delivers and she is once again in her element as the tough, no-nonsense doctor.  Also with a strong performance is Paddy Considine (The Bourne Ultimatum) as Sgt. Eddie Parks.

The 1080p High Definition video quality is sharp and the blood and guts are well formed.  The outdoor sequences have a vibrancy of color that is in contrast to the death all around.  The DTS-HD Master Audio 5.1 is well mixed and the bullets flying in surround sound makes for an immersive experience.  The combo pack offers the Blu-ray, DVD, and a HD Digital download as well as one 20 minute extra showing behind the scenes footage and interviews with the cast and crew.

While I enjoyed this movie more than I thought I would, I had one nagging issue with the final scene.  As we see Melanie and the other children gathering outside the survival pod preparing for a lesson, Helen is trapped inside in order to escape the air born fungus.  I just kept wondering… how is she going to get food to eat and survive?

For more information about Girl With All The Gifts visit the FlickDirect Movie Database. This release has been provided to FlickDirect for review purposes. For more reviews by Allison Rose please click here.

Girl With All The Gifts images are © Lionsgate. All Rights Reserved.