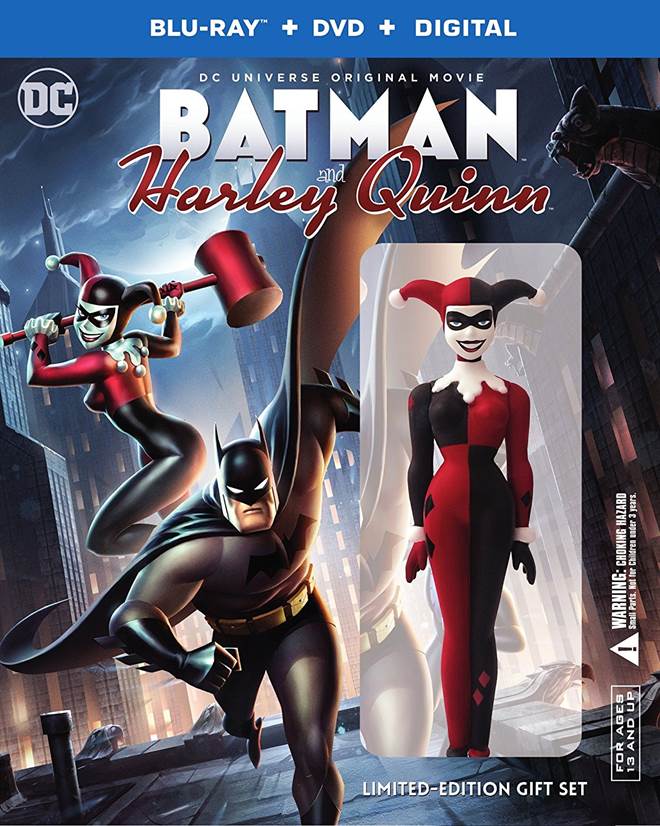 Purchase   DVD/Blu-ray/4K UHD
Warner Premiere, in conjunction with DC Comics, brings us back into the 1970's with an adult-ish type Batman movie. Despite the recommendation for ages 13 and older, I would definitely know your child before letting them watch this.  Many things are implied, but it doesn't take much imagination to figure out what is going on, which is a definite plus for those of us who grew up on the original Saturday morning cartoons.  Overall, Batman for my generation has definitely moved from the couch on Saturday mornings – grab that tv before the parents woke up!- to a Saturday night- grab the remote after the kids go to sleep!- show.

Batman and Harley Quinn is an all new animation brought to us by Bruce Timm (Batman:  The Killing Joke).  The graphics bring us back to the 1970's and it's a refreshing break after seeing Batman and Robin as Lego figures.  For those of us adults, it provides a wonderful experience, bringing us back to our bygone years.  The story hasn't changed much- there's a break in at S.T.A.R. Labs (where is The Flash?), which lands a secret file into the hands of acclaimed villains Poison Ivy and Florionic Man. Batman and Night Rider are called in to stop the bad guys.  What's a surprising element is that Batman realizes he will need help and calls upon our favorite wacky anti-hero, Harley Quinn to help.  Harley infuses Batman with a definite adult sense of humor and provides a healthy dynamic for the dynamic duo that hadn't been presently seen before.

Batman and Harley Quinn has definitely grown since those Saturday mornings I referenced above.  Robin has morphed into Night Rider and has definitely filled out.  He is certainly not the quirky sidekick he used to be but he still has some of the boyish characteristics we grew up on- like when Batman catches him after spending the night with Harley Quinn.  Night Rider is like a child caught with his hand in the cookie jar and it's quite funny.

The animation is presented in 1080p High Definition with an aspect ratio of 1.78:1.  While I mentioned that this is the 70's animation we grew up with, the clarity and lines of the animations are crisper and clearer than what was around 40 years ago.   Details are finer and colors are crisper.   I love that they preserved the original type of animation while bringing into the 21st Century.

Audio has also changed in the last almost half century.  Using DTS-HD, the sound was extremely clear.  Like the original cartoon, there are times when all you hear is dialogue and no background music.  It's actually a refreshing way to watch a movie- just being able to hear and listen to what the characters say.  In fact, one of the most integral parts of Batman and Harley Quinn is the verbal interactions Batman and Night Rider have with Harley.   Nonetheless, sound effects still remain in the past- but that is appropriate. They do have more depth than the original sound effects had, but production still kept that original feeling and that really enhances the movie.

Special features on the Blu-ray include the following:

In addition, you get a Sneak Peek at DC's Next Animated Movie:  Batman: Gotham by Gaslight!

The Deluxe Edition is a numbered series- there are only 60000 box copies being issued.  Besides the Blu-ray, DVD, and Digital Copy, the Deluxe Edition comes with a Harley Quinn miniature figurine.  She is in her full body red/white outfit, complete with pom poms on her hat.

For more information about Batman and Harley Quinn visit the FlickDirect Movie Database. This release has been provided to FlickDirect for review purposes. For more reviews by Jennifer Broderick please click here.