What makes Tag work is the chemistry between these actors.  It is easy to believe they have been lifelong friends and generally really enjoy each other’s company. 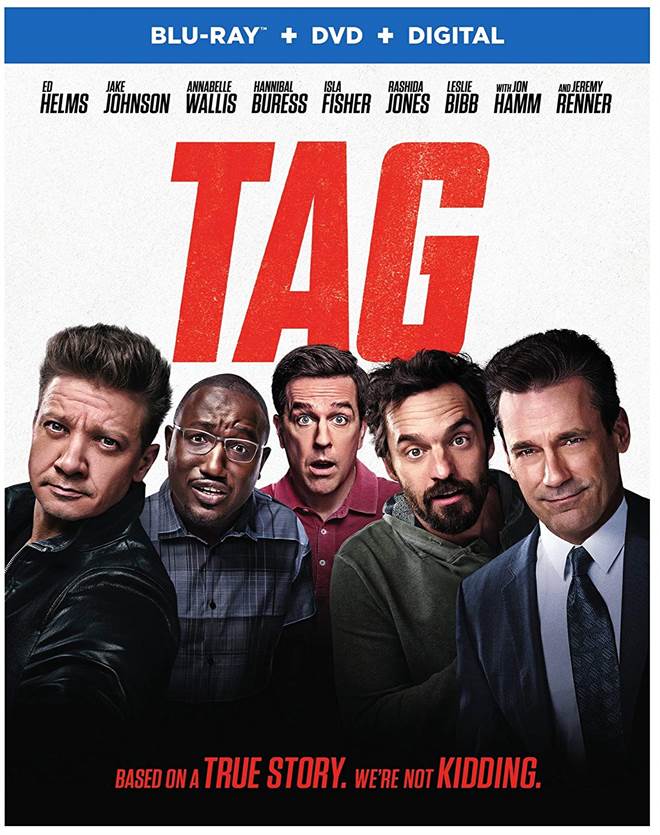 Purchase   DVD/Blu-ray/4K UHD
Childhood friendships can become lifelong confidants. People who knew each other "way back when"and have a shared history that is priceless.  So many times those friends grow apart and move on in different directions. It is rare and precious to maintain those bonds later in life and finding any way to do so is special indeed. For a group of guys from the northwestern United States that bond took the form of a childhood game that has continued for 30 plus years. Based on a real-life story, Tag follows five friends through their annual game and their enduring friendship.

Every May Hoagie ( Ed Helms; The Hangover), Bob (Jon Hamm; Mad Men), Chilli (Jake Johnson, New Girl), Sable (Hannibal Buress; Neighbors), and Jerry (Jeremy Renner; The Avengers) sneak up on one another in an effort to tag the other and end the month not being "it" for the rest of the year.  This game has got on for over 30 years despite moving, marriages, family deaths, etc. and through it all Jerry has yet to be tagged.  Despite the others best efforts he has never been "it" and this year Hoagie wants to change that and take him down.  One by one he gather the other members of the game and they descend on Jerry as he prepares to celebrate his wedding day.

That is when the games begin - but not without caveats.  Jerry's bride, Susan (Leslie Bibb; Iron Man) makes them sign an agreement to not try to tag Jerry at the rehearsal dinner or the wedding leaving limited opportunities for these friends to get him. They plot and plan but Jerry outwitted them at every turn including lying to avoid the tag.  All hope seems lost until Hoagie makes the bold move to go after Jerry at the end of the wedding ceremony but things don't exactly go as he had hoped.

What makes Tag work is the chemistry between these actors.  It is easy to believe they have been lifelong friends and generally really enjoy each other's company. Helms is in his element with his plots and plans and physical comedy moments.  Hamm is less intense than some of his previous roles and it is a nice change.  Renner is more intense in this role and frankly, he is the one who stands out most like a sore thumb but I think that is a combination of both the way the way the part was written and his portrayal.  Johnson is fine as the druggie and Buress has some humorous moments that are enjoyable.  Isla Fisher (Now You See Me) is also great as Anna, Hoagie's rather intense and competitive wife.

The 1080p video quality is very good.  Colors are full and true and the blacks are deep and rich. The picture is sharp and clear.  The DTS-HD Master Audio 5.1 is clean with little artifacting.  It highlights the eclectic soundtrack nicely.  Besides the Blu-ray disc, DVD disc and digital download, the combo pack comes with three extras.  The deleted scenes are simply ok but some of them could have been kept in the film.  The Gag reel isn't terribly funny but luckily isn't overly long.  The best extra though is the feature called "Meet the Real Tag Brothers" that showcases the ten guys who have been playing this game since high school.  There is something endearing about them that is heartwarming.

And heartwarming is the perfect word to describe this movie.  As we learn throughout the film, it really isn't so much about the game as much as it is about the enduring friendship and bond these men share even as they move through the various phases of their lives.  Renner's character is annoying and over the top but despite that the joy these men share is contagious.  It is truly a feel-good movie and one to sit and watch with friends.

For more information about Tag visit the FlickDirect Movie Database. This release has been provided to FlickDirect for review purposes. For more reviews by Allison Rose please click here.