Teen Titans Go! to the Movies has some great laughs and several twists and turns that keep you on your toes.  It has a moral that all good kids’ movies have and some fun songs for them to dance along to.  It’s got a fantastic cameo that will have you laughing out loud as well. 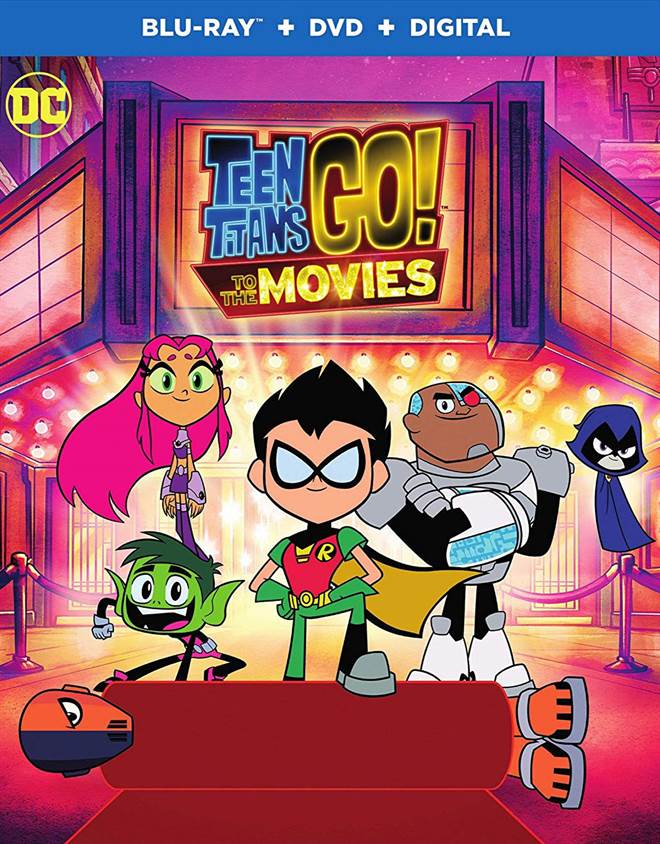 Purchase   DVD/Blu-ray/4K UHD
It seems anything can be made into a superhero-themed book/show/movie these days and DC comics proved that when they created the Teen Titans comic book series that became an animated television show in 2013.  The premise of the show is that of a group of teenagers with superpowers who are trying to be like their adult counterparts in saving the world but who are mostly just a bunch of goofballs (like many teenagers these days).  The leader of this group is Robin (Dick Grayson) who is trying to break out from behind the shadows of his guardian, Batman (Bruce Wayne).  The tv show has been such a success that this summer Teen Titans Go! to the Movies hit theaters to both critical and commercial acclaim.

Not knowing where they fit into the world of superheroes, the Teen Titans are going their best to help save the day.  Increasingly frustrated they sit idly by as they watch their adult counterparts make movie after movie where they defeat numerous enemies.  Robin (Scott Menville; Teenage Mutant Ninja Turtles), longing for the same fame, seeks out a way to make his mark and find his own arch enemy.

When the team tries to stop evil villain (are there any villains that aren't evil?) Slade (Will Arnett; Arrested Development) they finally get the recognition they deserve and a movie deal.  However, increasingly frustrated by the other Titans, Robin lashes out and makes the movie on his own, destroying their friendship in the process.  Suddenly he finds he has been tricked and is embroiled in a plot for world domination. Duped and alone, he learns that friends can be more important than fame and money and goes groveling back to the Titans for help with taking down the bad guy.

The writers and directors of this movie did a terrific job of balancing the laughs with a serious message about the bond of friendship. While this film had the potential of being of being cheesy and stupid, they made sure it had smart comedy mixed with some well placed potty humor while keeping the serious message of friendship always in the back of the audiences' minds. They combined a fart joke with a fantastic cameo and some sarcastic lines to offer a blend of humor that can appeal to everyone's states.

They also brought in some terrifically talented voice actors and Arnett certainly shines here.  Tara Strong (Unikitty) as Raven is also great as her lines are delivered dripping with sarcasm.  It's as if you can feel your teenage daughter rolling her eyes at you with every word that comes out of Raven's mouth. The rest of the cast are great and give the film a feeling of weightiness blended with fun.

The Blu-ray combo pack has the Blu-ray disc, the DVD disc, and the Digital HD download.  Presented in 1080p high definition resolution, the visuals pack quite a punch.  The vast array of colors is vibrant and magnificent and the darker tones are deep and true. The DTS-HD Master audio 5.1 is a wonderful compliment to the visuals.  The eclectic soundtrack booms from the speakers and vibrates throughout the film.  There are several extras including a music video and a live-action feature where actors in Teen Titans costumes create shenanigans on the movie studio lot a la Benny Hill fashion.

Teen Titans Go! to the Movies has some great laughs and several twists and turns that keep you on your toes.  It has a moral that all good kids' movies have and some fun songs for them to dance along to.  It's got a fantastic cameo that will have you laughing out loud as well.

DC also just released Titans on their DC Universe streaming network for ones who want a more grown-up version of the Titans as well...

For more information about Teen Titans GO! to the Movies visit the FlickDirect Movie Database. This release has been provided to FlickDirect for review purposes. For more reviews by Allison Rose please click here.

Teen Titans GO! to the Movies images are © Warner Bros.. All Rights Reserved.