Johnny English Strikes Again is a great way to spend a night just relaxing and laughing without having to put much thought into what you are watching. 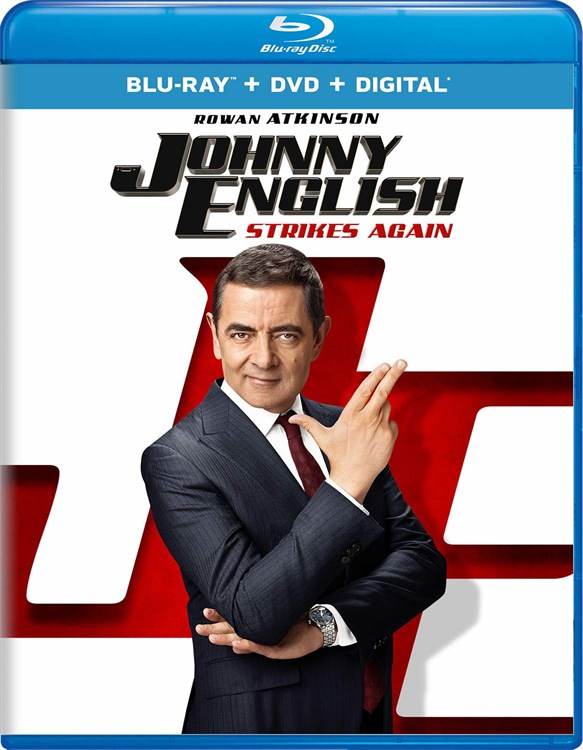 Since the 1980s, Rowan Atkinson has been a fixture in film and on television. From his breakthrough role in The Black Adder to the incomparable Mr. Bean, Atkinson has been an international entertainer for almost 40 years. In 2003, he starred as the lead in Johnny English, a spoof on the James Bond series. The film was followed by Johnny English Reborn in 2011 and the latest installment in the franchise, Johnny English Strikes Again, is set to be released on January 22 on Blu-ray and DVD.

Johnny English is retired from being a spy and is now teaching at a private school in England. And while he enjoys teaching, he finds it hard to part ways with the "spy" side of himself - even giving his students the occasional lesson on espionage. So when the Prime Minister (Emma Thompson; Love Actually) needs him to come back to service, he dutifully obliges. The situation is dire as someone has hacked into the National Security database, exposing all of their undercover agents. English's sidekick,  Bough (Ben Miller; Paddington 2) joins him on the mission, both employing "old school" techniques to solve a high-tech villain set on taking over the world.

While this film didn't see much love at the box office last fall, to be fair, it had entered a saturated market, one of the most competitive the film industry had seen in a fall in years. However, it should hopefully find its groove in the home entertainment market. Why may you ask? Because this movie can be summed up in one word, "FUN". It is the perfect feel-good movie to pull out when you have had a hard day or week.

Atkinson performance is the best in the series, while the supporting cast, only helps to enhance the hijinks seen on screen. Miller is the straight man to Atkinson with each other perfectly getting back to the roles they respectively had in the original Johnny English.  Thompson is a natural playing the most powerful person in the country but they can't help but shows off her comedic skills yet again (last time seen in Men in Black III).  Olga Kurylenko (Quantum of Solace) shows a comedic side as well that is not often used in her normal action roles. Lacy once again plays the bad guy as he did in Rampage. His character is so over the top that he is the perfect match Atkinson own performance.

Johnny English Strikes Again is presented in its original aspect ratio of 2.39:1 with a 1080p AVC encoding. Colors are vibrant and blacks are true with zero signs of artifacting.  For only being a Blu-ray transfer the quality here is superb. One can only imagine what a 4K release of this film would look like if this is the quality for just Blu-ray.

The audio is presented in DTS-HD MA 7.1 is provides the perfect ear candy to go with the video component of this release. The sound perfectly envelops the room. With crisp and clear dialog on the center channel and all other speakers are relegated to special effects.

Aside from the Movies Anywhere Digital HD copy included in the release has some pretty impressive featurettes considering this was not a huge moneymaker on its theatrical release. These featurettes include:

If you are Rowan Atkinson fan, this film is right up your alley; it's the typical Atkinson fare that he is known for. It's a great way to spend a night just relaxing and laughing without having to put much thought into what you are watching. The cast meshes well together, all being equally important, in my opinion, and it's always fun to see Emma Thompson in a comedic role.

Please do not have any food or drinks near or on you while watching the film's VR scene. You will be rolling so hard in laughter that you will spill it all over the place!

Allison Rose
No, Johnny English Strikes Again won’t win any awards but it will resonate with fans of the character and Atkinson’s shtick.
Full Review | Grade: C