An American Werewolf in London has the perfect blend of dark humor and terror. 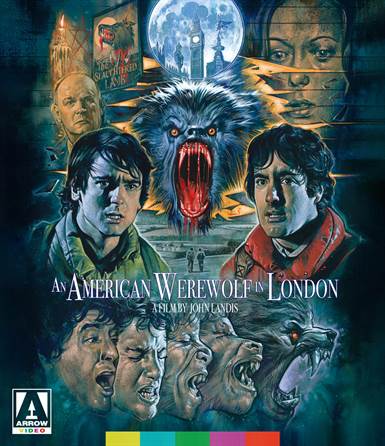 John Landis (Coming to America, Michael Jackson's Thriller) has created many, what most people would term, "classic" films. Many of them, like Trading Places, or The Blues Brothers, to name a few, were comedies but one, in particular, has stuck with Horror film lovers and for good reason.

An American Werewolf in London is high on the list of influential films, and it won an academy award for its Special Makeup effects (the first of its kind). It was no surprise as Rick Baker was deserving of all the accolades he received. His work on this film was awe-inspiring.

Now, please stop here and watch the movie, if you are that one remaining person that has not seen it, in case you need a refresher...

American tourists David (David Naughton; Hot Dog...The Movie) and Jack (Griffin Dunn; Dallas Buyers Club) are savaged by an unidentified vicious animal whilst hiking on the Yorkshire Moors. David awakes in a London hospital to find his friend dead and his life in disarray. Retiring to the home of a beautiful nurse (Jenny Agutter; Child's Play 2) to recuperate, he soon experiences disturbing changes to his mind and body, undergoing a full-moon transformation that will unleash terror on the streets of the capital...

This film had the perfect blend of dark humor and terror. From the horrific nightmare images of bestial-Nazi's on a murderous rampage to the haunting scenes of the ever-decaying Jack (Griffin Dunne) as he pleads with his friend to commit suicide and end the curse, forever, are simply indelible.

Presented here by Arrow Home Video is, what seems to me, to be the definitive release of this film. If you have an old DVD or even a previous Blu-ray from Universal, your collection demands this release.

The video here is in gorgeous 1080p with its original aspect ratio of 1.85:1. It is a nearly flawless scan of the original 35mm negative and it is worth every penny of its price tag.

The color palette is so vibrant and even the shadowy scenes on the moors, although a bit grainy in spots, have jaw-dropping clarity.  During the lurid nightmares, the lights of London, and even the blood-dripping fangs of the titular Werewolf the details are apparent. You will have to mop the gore from the floor when the credits roll.

The audio is also a thing of beauty. I always loved the contrast of 50's rock 'n roll classics and how, in this context, seemed to underscore the terrors presented to the viewers. Even with a Mono 5.1 sound, the dialog is clear and upfront, and the echoing howls, not to mention the screams of horror and pain as Griffin Dunne is torn apart, are chillingly vibrant. It all makes for a phantasmagoric experience not soon forgotten.

Of course, what would this definitive collection be without the extras, some have been present on previous releases but included in this one are few you will not want to miss.

Mark of the Beast: The Legacy of the Universal Werewolf, An American Filmmaker in London, Wares of the Wolf, I Think He's a Jew: The Werewolf's Secret and not to mention, additional commentaries, trailers, photo gallery, and much, much more. You will have hours of extras to sink your teeth into.

In addition to this, Arrow's special edition comes packed with a booklet, a mini-poster, and postcard-sized Lobby Cards. This box set is a must-have for every horror collector's display case. Arrow Home Video continues to release some of the best collections out today, and this addition is no exception to that trend. Pick this up when it releases on 10/29/19, just in time for your All Hallows Eve, horror binging.

As long as you remember to keep off the moors, and beware of the Moon... you will be just fine.

Purchase a DVD/Blu-ray/4K UHD physical copy of An American Werewolf in London today at Amazon.com

Download An American Werewolf in London in Digital HD/4K from the iTunes store.

For more information about An American Werewolf in London visit the FlickDirect Movie Database. This release has been provided to FlickDirect for review purposes. For more reviews by Leonard Buccellato please click here.

An American Werewolf in London images are © Universal Pictures. All Rights Reserved.

Read More Reviews For An American Werewolf in London