Hayek comes across beautifully as the villain, but I'm not sure there is a role she can't pull off. 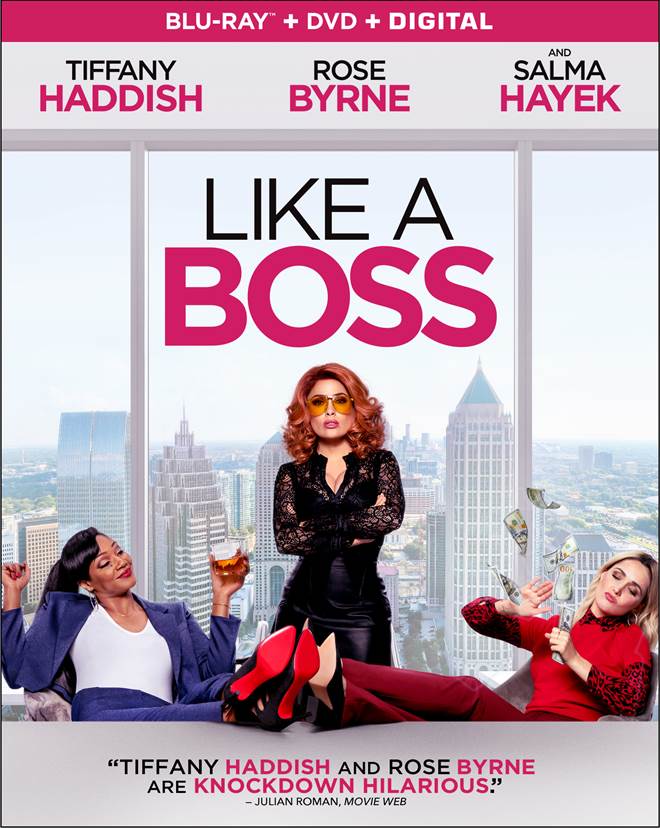 Ever since 2011's Bridesmaids came to theaters a new "sub-genre" has consistently made its way to the big screen.  These female based, raunchy, friendship, women's empowerment movies have been popping up with great casts and usually some funny and memorable moments. In 2017, Girls Trip brought together four talented women and a hilarious script that showcased the comedic talents of Tiffany Haddish (Night School).  This year Paramount Pictures had Haddish pairing up with Rose Byrne (Neighbors) and Salma Hayek (Frida) in the comedy, Like A Boss.  Even though you can't invite your friends over right now for a girl's night in you can buy this Blu-ray so you have something to watch while you webchat your best gal pals.

Mia (Haddish) and Mel (Byrne)had been best friends since grade school.  They have always had each other's backs and from a very young age, they showed an interest in beauty almost from the start.  Through middle school, high school and college they were by each other's sides so it was only natural that when it came time for the "real world" they would start their own makeup line.  Mia was the creative one, the free spirit of you will wile Mel ran the business end of their company.

Just as their business was about to go bankrupt, Mia and Mel received an invitation from Ovieda Owner and Beauty Titan Claire Luna (Hayek).  She had been watching their online sale and wanted a part of their business.  She agreed to settle their debts for 49% of their company with the stipulation that if they break their union she would take the controlling percentage of their company.  Claire, of course, then does everything in her power to destroy their friendship, steal their ideas and take over their beauty line.

Haddish was brilliant in Girls Trip but like Amy Schumer (Trainwreck) and Rebel Wilson (The Pitch Perfect Trilogy) her act grows old fast.  Byrne is generally very good at comedy and she does what she can with what she is given here.  Hayek comes across beautifully as the villain but I'm not sure there is a role she can't pull off.  However the best scene in the entire film is brought to us courtesy by the over the top actor, Billy Porter (Pose).  His drama queen like exit from the restaurant after he gets fired is pure diva genius and is the most memorable moment in the movie.

The Combo pack includes the Blu-ray disc, the DVD and the Digital HD.  The 1080p high definition resolution is rather sharp and clean and the colors come through so nicely that you can even see the blue tint in Haddish's hair.  The DTS-HD master audio 7.1 is also very good with a nice balance between the dialogue and the eclectic soundtrack.  The Blu-ray disc also houses all three of the extras.  They include: deleted scenes, "Get Some" with Ron and Greg which is basically an advertisement for one of the rival cosmetic companies in the movie, and With C0-workers like these, Who needs friends where the cast gush about each other for over 5 minutes.

Like a Boss is only 83 minutes long, probably because nobody would bother to watch one bit longer than they absolutely have to.  There are no laugh out loud moments in the movie which doesn't bode well for a comedy.  Hayek just comes across as mean, Byrne seems pathetic like a squeaky little mouse and Haddish is just playing Haddish.

If you are a fan of the cast then you may want to buy this film but don't go in with high expectations.  Even Jennifer Coolidge (Legally Blonde) who is usually very funny sees to fall flat.  The moments that are clearly staged to be humorous ( Mia eating an overly spiced -thanks to Mel- Mexican dish) just aren't that funny.

For more information about Like a Boss visit the FlickDirect Movie Database. This release has been provided to FlickDirect for review purposes. For more reviews by Allison Rose please click here.

Like a Boss images are © Paramount Pictures. All Rights Reserved.