Since 48 hrs. had yet to be released, Landis and the studio took a big risk casting Murphy, fortunately, the gamble (pun intended) paid off. 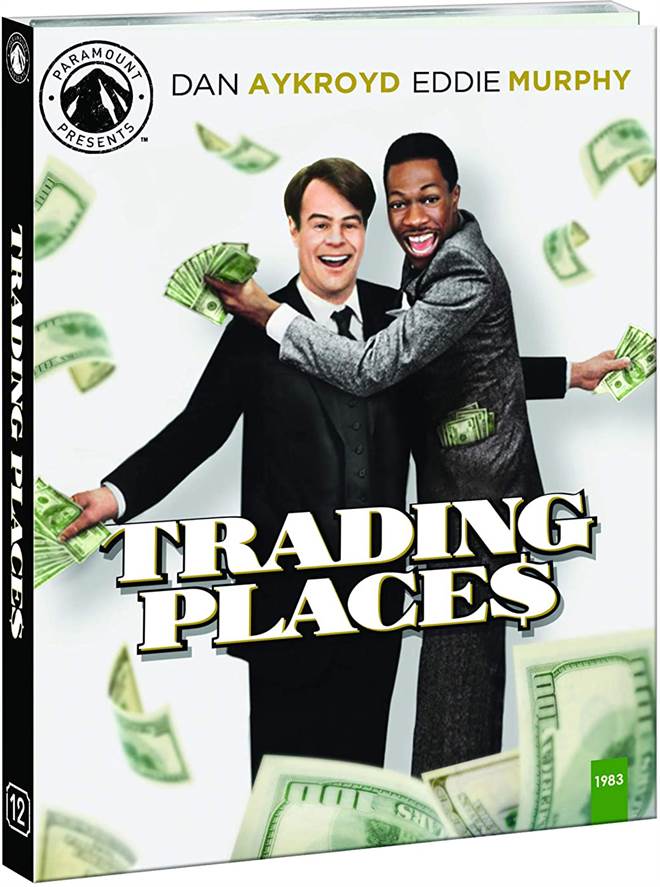 In 1983 Eddie Murphy was in his third year as a regular on Saturday Night Live.  While on the show he created some memorable characters such as Adult Buckwheat, Sarcastic Gumby, and Mr. Robinson (a parody of Mr. Rogers). The year prior, he also made his feature film debut co-starring with Nick Nolte (The Prince of Tides) in 48 Hours.  The film was a box office hit and was the jumping-off point for a very successful movie career for Murphy.   For his sophomore film effort, Murphy decided to pair with John Landis (The Blues Brothers) and fellow SNL alum, Dan Aykroyd (Ghostbusters). That Movie, Trading Places, has become remastered and rereleased as part of the Paramount Presents Blu-ray series.

Louis Winthorpe III (Aykroyd) grew up with a silver spoon in his mouth and, as an adult, worked for The Duke Brothers, Randolph (Ralph Bellamy; Rosemary's Baby) and Mortimer (Don Ameche; Cocoon), in their commodities brokerage firm.  He had plenty of money, was engaged to the Duke Brother's niece, and lived a cozy life in Philadelphia, Pa.  Conversely, Billy Ray Valentine (Murphy) was a street hustler trying to make a buck any way he could.  When the Dukes watch an exchange between the two men, they decide to settle their long-running argument about nature versus nurture.

They frame Winthorpe, costing him his job and all his money, and bail Valentine out of jail, giving him a job and letting him live in Winthorpe's home, which they owned. Using his street smarts, Valentine becomes successful in the commodities market while Winthorpe gets help from a prostitute named Ophelia (Jamie Lee Curtis; True Lies).   However, when Valentine overhears the Duke Brothers talking about their bet, he finds Winthorpe and the two devise a plan to bankrupt the Dukes while making themselves rich.

Since 48 hrs. had yet to be released, Landis and the studio took a big risk casting Murphy, fortunately, the gamble (pun intended) paid off.  Aykroyd, who was already a seasoned film actor, had great chemistry with both Murphy and Curtis.  Bellamy and Ameche beautifully portrayed the mean old men reminding me of the puppets in the balcony during The Muppet Show.  Curtis, who was known as a "scream queen" at that time did an excellent job, helping her to break out of the typecast mold in which she had been pigeon-holed.

This new, remastered release was scanned in 4K giving it an uptick in picture quality.  The colors are warm and the details are sharp.  Flesh tones are accurately depicted, and the richness of the black hues offer the video added depth.  The Dolby TrueHD audio is merely ok on the Blu-ray disc.  The dialogue is clear but there is a lack of depth that is noticeable, especially since the subwoofer isn't utilized much.  As with all the Paramount Presents Blu-ray combo packs, the extras are previously released with the exception of Filmmaker Focus with John Landis.  The other extras include:  Insider Trading: The Making of Trading Places, Trading Stories, The Deleted Scene, Dressing the Part, Industry Promotional Piece, Isolated Score, and Theatrical Trailer.

In his first two feature film roles, Murphy chose well and in doing so, solidified himself as a movie star.  Both 48 Hrs and Trading Places were critically well received and, though he would have some stumbling blocks along the way, Murphy has bankrolled his successes in Hollywood to a forty-year-long movie career.  With the highly anticipated release of Coming 2 America in March of 2021, Paramount was smart to showcase Murphy's previous work, especially a classic movie such as Trading Spaces.

The plot is entertaining, the actors are excellent, and the restoration is top-notch.  Well Done Paramount!

For more information about Trading Places visit the FlickDirect Movie Database. This release has been provided to FlickDirect for review purposes. For more reviews by Allison Rose please click here.