Zoe Lister-Jones pays homage to the 1996 movie with Easter eggs sprinkled throughout however, the story never gets fully fleshed out leaving the audience a little unsatisfied and somewhat confused. 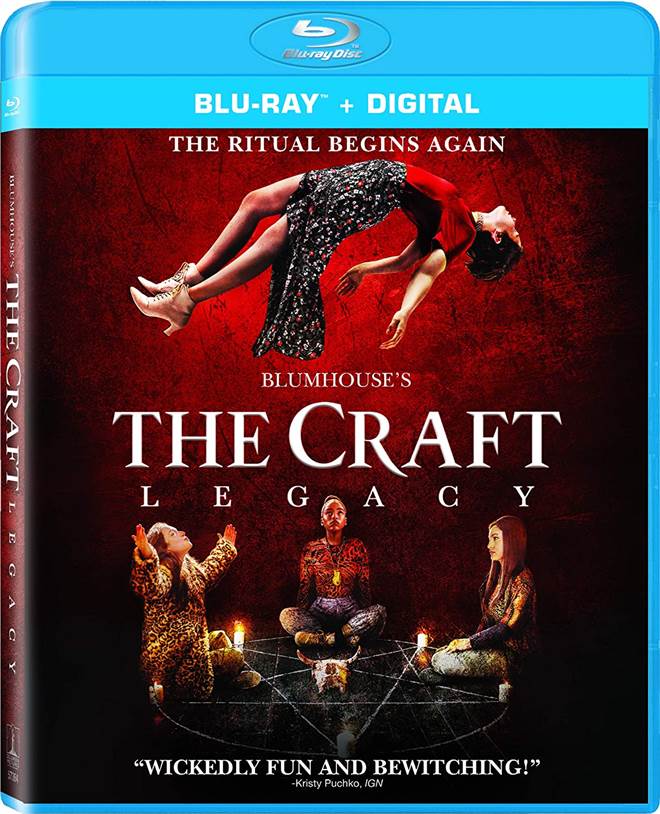 Witchcraft...everyone has their own ideas of what that word means.  Officially it is described as "the practice of magic, especially black magic; the use of spells".  Some truly believe in the power of witchcraft while others think it is all make-believe.  Some practice the art form and see it much like an organized religion while others feel it is Satan's work.

Regardless of where you may fall on this spectrum, it's safe to assume you have probably seen at least one movie about or containing elements of witchcraft.  For many of us who grew up in the 1970s and '80s, one example would probably be 1996's The Craft starring Neve Campbell (Scream).  This year Blumhouse productions and Columbia Pictures offer an updated version of the film/sequel, called The Craft: Legacy.

This new story begins in much the same way the first one did, with candles being lit, three teenage girls sitting around chanting spells, and quick flashes of the elements - Earth, air, fire, and water - waiting for the fourth member of their coven to appear.  Enter Lily (Cailee Spaeny; On the Basis of Sex), a new girl in town who moves with her mother, Helen (Michelle Monaghan; Kiss, Kiss, Bang, Bang) to live with Helen's fiancé, Adam (David Duchovny; The X-Files) and Adam's three sons.  As the new girl in school, Lily has a hard time fitting in and the three other girls of the coven, Lourdes (Zoey Luna; Pose), Frankie (Gideon Adlon; Blockers), and Tabby (Lovie Simone; Greenleaf), become her new friends.

Once they figure out that Lily has powers and shows her how to use them, the four start testing those power and casting spells.  However, after making the school bully, Timmy (Nicholas Galitzine; High Strung), their target, they change him from a jerk to a sensitive, caring guy who starts hanging out with the coven.    However, things begin to go terribly wrong and Lily asks her mother to leave Adam's house.  Before they go, Lily discovers a file in Adam's office with her name on it and adoption papers inside revealing that Helen is not her birth mother.

Both the original film and this new version are classified as horror, and they have some elements that could be deemed "horror", I wouldn't equate them with Nightmare On Elm Street or The Conjuring.  And while the supernatural aspects are pretty much the same for both movies, the original had a much more cohesive plot.  The Craft: Legacy has several subplots that don't get fully developed and leave the viewer wondering where the story was heading.

Another change is the teens themselves.  Nancy (Fairuza Balk; Almost Famous) was pretty snarking and became downright mean at the end, whereas none of these characters had the same level of venom.  Spaeny is ok as Lily but doesn't match the layered performance that Robin Tunney (End of Days) brought to Sarah in the original.  Writer/Director Zoe Lister-Jones (Band Aid) pays homage to the 1996 movie with Easter eggs sprinkled throughout however, the story never gets fully fleshed out leaving the audience a little unsatisfied and somewhat confused.  The best moment is the final scene though (which I won't give away because it is too good to spoil).

The video quality of the Blu-ray offers the standard 1080p resolution and is what we have come to expect from Blu-rays.  There are a few pops of color in an otherwise muted color palette and the details are clean.  The DTS-HD Master Audio 5.1 has good resonance and the soundtrack is showcased well in several scenes.  The extras are limited to Franchise Legacy, Powerful Story, Magical Director, Extended & Alternate Scenes, and Previews and offer little in the way of content.

While The Craft: Legacy had an interesting plot and good pacing throughout, The Craft: Legacy stumbles its way through and ends with a number of unexplained moments that are merely disconcerting.  If you are a fan of the original, go into this second film with relatively low expectations because it doesn't live up to its predecessor.

For more information about The Craft: Legacy visit the FlickDirect Movie Database. This release has been provided to FlickDirect for review purposes. For more reviews by Allison Rose please click here.

The Craft: Legacy images are © Columbia Pictures. All Rights Reserved.

The Bridge on the River Kwai