Lang did an excellent job in the first film, which is what I believe helped to make it so successful and he is no less ruthless or cunning in this sequel. 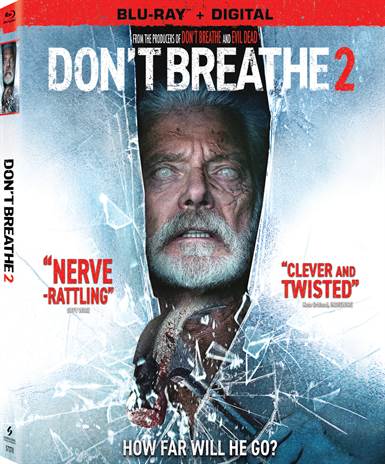 It is a proven fact that when a person loses one of their senses, the part of the brain that used to process that sense focuses on one of their remaining senses, giving them an almost "superpower".  For example, if a person goes deaf, their sense of smell may become more acute.  In the case of military veteran Norman Nordstrom/"The Blind Man"(Stephen Lang; Avatar), after losing his eyesight to shrapnel, his ability to hear sharpened.

Writer/director Fede Alvarez (Evil Dead) decided to explore that idea within the construct of a horror film and in 2016 Don't Breathe became a sleeper hit.  Based on its success and its net profit of almost $60 million, a sequel was, of course, greenlit. Don't Breathe 2 premiered in theaters on August 13, 2021, but did not fare as well as its predecessor, only grossing $47 million worldwide.  Six days before Halloween, the sequel will hit stores on DVD, Blu-ray, and 4K.

Once again, we find Nordstrom living in a suburb of Detroit, only this time he is not alone.  With him is an eleven-year-old girl he calls Phoenix (Madelyn Grace; Grey's Anatomy).  After convincing Nordstrom to let his friend, Hernandez (Stephanie Arcila; Penny Dreadful: City of Angels), take Phoenix out of the house, they are spotted by the grave of Phoenix's mother, who supposedly died in a house fire.  Following them back to the house, antagonist, Raylan (Brendan Sexton III; Russian Doll), and his friends break in and kidnap Phoenix. However, what they don't realize is that Nordstrom would do anything to get her back.

Lang did an excellent job in the first film, which is what I believe helped to make it so successful and he is no less ruthless or cunning in this sequel.  Unfortunately for him, he often is upstaged by his costar, Grace.  Despite her age, she looks like a seasoned professional who draws the viewer in and holds their attention. Sexton III is ok for the most part, but his "band of merry men" oscillate in the level of talent they possess.

It can be difficult to watch a movie shot mostly at night and/or in the darkness.  However, cinematographer, Pedro Luque (The Girl in the Spider's Web), manages to offer the illusion of darkness while still highlighting the actors' faces.   The details are sharp and clean, making it easier to watch the hour and forty-minute film.

The DTS-HD master audio 5.1 sound is how a movie like this should be heard.  Because of the nature of the story - a blind man using a heightened sense of hearing - it is imperative that the audio is especially crisp, and the dialogue isn't drowned out by the soundtrack, ambient noises, and weapons. Don't Breathe 2 offers a nice balance that enhances the viewer's experience.

Unfortunately, this release doesn't offer a lot in the way of extras, and those that are included don't delve into the philosophy behind the story or the "making of" featurette that tends to be enjoyable.   The extras included on the disc are Audio Commentary featuring Rodo Sayagues, Fede Alvarez, and Pedro Luque, Friends and Filmmakers, Bad Man (Slang Is Back), Designing Deception, and an Extended Ending.

When will movie studios learn that not every film needs a sequel and that said sequels are generally not as good as the original film?  Such is the case here and Sony probably would have fine simply taking their cash from the surprise hit of the first movie instead of trying to extend its life.

Don't Breathe 2 is certainly not the best horror movie I have ever seen but it also isn't the worst (by far).  If you enjoy the genre, you would be inclined to purchase this sequel, especially if you already have the first one.  As for the rest of the population, I could take it or leave.

Download Don't Breathe 2 in Digital HD/4K from the iTunes store.

For more information about Don't Breathe 2 visit the FlickDirect Movie Database. This release has been provided to FlickDirect for review purposes. For more reviews by Allison Rose please click here.