The leads, Mulligan and Kazan, are terrific and help to move the plot along nicely as they scramble to build an article. 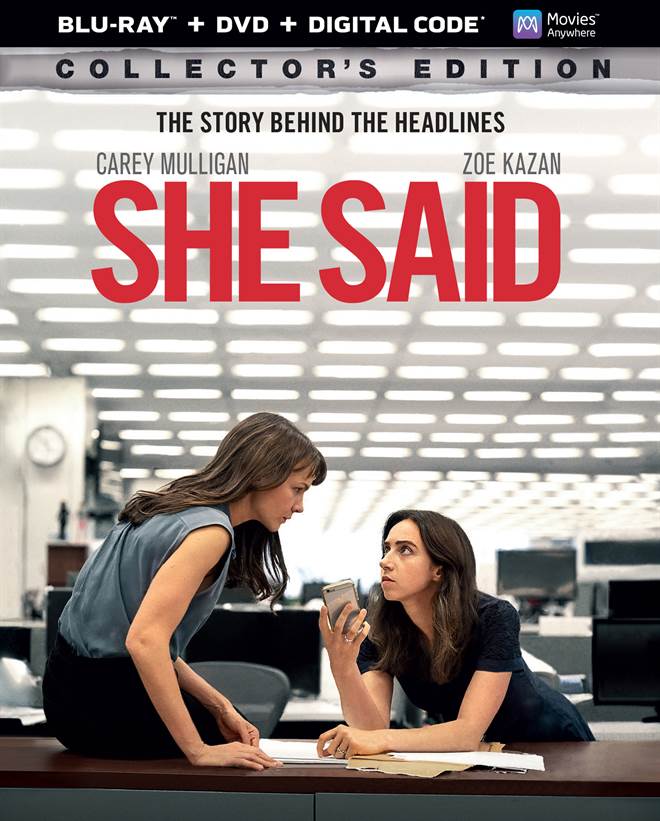 Investigative reporters are individuals who deeply investigate a single topic of interest, such as serious crimes, political corruption, or corporate wrongdoing. They can spend anywhere from several months to years researching a story.  Sometimes they even go undercover to find out the truth.  Over the last sixty-plus years, reporters have "broken" news stories about embezzlement, celebrity misconduct, inappropriate deals brokered by people in power, and even a President of the United States.

Often these stories get retold by Hollywood in a very dramatic manner and tend to be Academy Award nominees.  In 1974, a film called All the President's Men detailed the illegal activity that permeated the Republican Party, who knew about it, and when they knew. In 2015, Spotlight, which told the story of how the Boston Globe revealed the systemic abuse of children in the Catholic Church, won the Oscar for Best Picture.

This past October She Said premiered at the New York Film Festival and chronicled the investigation of years of sexual assault by Miramax co-founder Harvey Weinstein.  The film is based on the nonfiction story by Megan Twohey (Carey Mulligan; Promising Young Woman) and Jodi Kantor (Zoe Kazan; The Big Sick), the two New York Times reporters who wrote the original article and indirectly started the #metoo movement.  After receiving critical acclaim, the film is being released on Blu-ray, Digital, and DVD.

In 2016, Twohey was part of a duo that investigated sexual misconduct by former President Trump.  A year later, Kantor received a tip that actress Rose McGowan was sexually assaulted when she was 23 years old by producer Harvey Weinstein.  She contacted McGowan who initially refused to talk but then called Cantor back and recounted the day Weinstein allegedly raped her. Frustrated by the lack of females willing to go on the record, she contacted her colleague, Twohey, for advice and the two of them started working on the case together.   On October 5, 2017, The New York Times published the story which ultimately led to over eighty more women coming forward and Weinstein being sentenced to 23 years in jail.

The Blu-ray edition offers a nice uptick in picture quality with 1080p resolution and a 1.85:1 aspect ratio.  Much of the color palette is purposely muted and the picture edges are fuzzy at times to depict the flashbacks and the recreated scenes from the past.  However, there are some brighter moments when colors pop signifying more upbeat, happier moments in the film. The star of this combo pack, however, is the DTS-HD Master Audio 5.1.  Ambient noise is apparent throughout and is necessary to build the type of suspense director Maria Schrader (I'm Your Man) was going for.  The score is subtle and not overbearing and the dialogue is clean.

The combo pack only comes with the Blu-ray Disc, a DigitalHD download, and two extras.  They include Breaking the Story and the Theatrical Trailer and, as you can imagine, the lack of extras is disappointing.

While She Said has a lot going for it, it does start off a little slow and can be frustrating at the lack of cooperation from the women who were interviewed as the plot churns along.  There are also more and probably uglier components to the story that were left out of the film but that might have given it more of a "bite" at the end. The leads, Mulligan and Kazan, are terrific and help to move the plot along nicely as they scramble to build an article accusing one of Hollywood's biggest players of sexual harassment while simultaneously trying to find one victim to go "on the record".

Frustrating, entertaining, topical, and very well written, She Said should be required viewing for teenage girls in 8th grade.

For more information about She Said visit the FlickDirect Movie Database. This release has been provided to FlickDirect for review purposes. For more reviews by Allison Rose please click here.

She Said images are © Universal Pictures. All Rights Reserved.