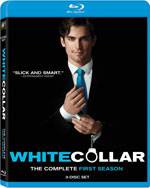 Purchase   DVD/Blu-ray/4K UHD
The story is one that has become popular these days; it is one of an eccentric genius who teams up with law enforcement to solve crimes. In this case, the genius is Neal Caffrey (the dashing-as-required, Matthew Bomer) who we first meet in prison as he is a jack-of-all-trades super thief. After executing an effortless breakout of a federal facility for personal reasons, he is apprehended by Peter Burke (Tim DeKay) who actually looks as if he might be a little goofy, but is really a super-capable FBI agent.

The season's sub-plot comes to light when Caffrey offers to help Burke catch the elusive forger called the Dutchman. His offer comes with one catch, however; Caffrey demands to be put into Burke's custody and allowed to be "free". Caffrey wishes to find Kate, his girlfriend who broke up with him, leaving no notice of where she was going to. Burke agrees, but Caffrey must wear an ankle bracelet at all times.

Neal Caffrey and Peter Burke, plus Peter's wife, who is played deftly by Tiffani Thiessen, and the rest of the team, start closing cases. The formula is that Neal, being a consultant and an expert smooth criminal can bend the rules or blend in where an FBI agent would be out of their depth.

White Collar is a light, fun, reasonably slick crime series with attractive charismatic leads and enough going on to keep you entertained. It is in the spirit of The Mentalist more-so than Law and Order.

Video
White Collar is 1080p in AVC MPEG-4 on THREE Blu-ray Discs total. The aspect ratio is 1.78:1. The quality is amazing. Apparently, it was shot using a Sony F35 Camera; and the series makes good use of close-ups that look startlingly clear on screen. The quality is one of the best I have ever seen.

Audio
The sound is DTS-HD 5.1 Master Audio, and it has sufficient punch. The musical score is definitely decent, and the voices are crisp and clear. I didn't find anything to complain about. Occasionally, I watch these shows with sub-titles on and didn't bother with White Collar.

Supplements
Among the extras are three featurettes; "Pro & Con" focuses on the two lead characters, "Cool Cat in a Hat" showcases the fashion of the show, and "Nothing But the Truth" features Tom Barden, the show consultant and former FBI agent.

Also included in the extras are some deleted scenes and a gag reel, as well as come commentary from the cast members.

For more information about White Collar visit the FlickDirect Movie Database. This release has been provided to FlickDirect for review purposes. For more reviews by Marco Chacon please click here.

Chris Rebholz
I've reviewed my fair share of movies and TV shows. A number of them have come from the USA Network. Of all of them, I would say that White Collar is easily my favorite. The rich well developed characters and the fun stories are so addicting.  While Season 4 seemed to be hitting a bit...
Full Review | Grade: B

Allison Rose
I had heard a lot of good things about the acclaimed USA Network show White Collar but I had never actually seen it so I wasn't sure what to expect when I dove, head first, in to the final six episodes of the series.  Season six, out on DVD today, was short and sweet and apparently tied up ...
Full Review | Grade: B