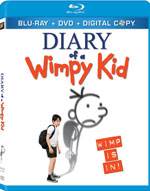 Purchase   DVD/Blu-ray/4K UHD
As if we wish to relive it again, we make the children of humanity grow up much as humanity itself did, steeped in superstition. We are only to be granted the ability to tell the difference between fantasy, wishes, and reality later on; hence, the creation Diary of a Wimpy Kid series by Jeff Kenny. The series has now been turned into a feature length film.
Best friends Greg (Zachary Gordon, National Treasure: Book of Secrets) and Rowley (Robert Capron, The Sorcerer's Apprentice), along with most of the other characters in Diary of a Wimpy Kid, live in the twilight preceding, by some distance, their Age of Reason: middle school. Their lives are ruled by a distinct inability to recognize fantasy as separate from reality, and this is much of what can be termed the "action" of the film.
I shall be honest here — the film has my number. I planned to include within this review a diatribe on how astoundingly unimportant, in the grander scheme, the tribulations of middle-schoolers are. I do not, as a rule, expect the world to be imperiled by some dark force; au contraire, I think the best drama is the kind we can relate to without engaging in heavy metaphor. Greg himself brings up any pretended originality in this line of argument, by pointing out its absurdity. He, too realizes, what nonsense the trials are that he must go through, so it would not be fair for me to accuse the film of ignoring it.
However, it is quite fair of me to accuse the writers of consistently and solely delivering the kind of "comedy" that demands you put quotation marks around it when you call it that. One or two glimpses of a clearly funny idea with competent execution — "Cheerleader Gains One Pound" comes to mind — only emphasize the unrepentantly lowbrow and uninspired character of the rest of what passes as humor.
Acknowledging more the fantastic view of reality than the situational absurdity, Diary of a Wimpy Kid offers a slew of dynamic visuals, with a surreal bent. These are very often quite clever, and it's the only thing I can say that the film really has to offer to all audiences. The Blu-ray puts one of these visuals on the cover, and quite rightly so: come for the nonsense, stay for the nonsense.
The Blu-ray offers a number of extras such as Feature Commentary with Director Thor Freudenthal and Writer Gabe Sachs, Deleted Diary Pages (1080p), Theatrical Trailer (1080p, 1:52), Sneak Peaks (1080p), Digital Copy "How To" (1080p, 3:35), and BD-Live Exclusive: And Now a Word from Our Author (720p, 3:39).
Cast:
Directed By:
MPAA Rating: PG

For more information about Diary of a Wimpy Kid visit the FlickDirect Movie Database. This release has been provided to FlickDirect for review purposes. For more reviews by Stephen Compall please click here.

Diary of a Wimpy Kid images are © Fox 2000 Pictures. All Rights Reserved. 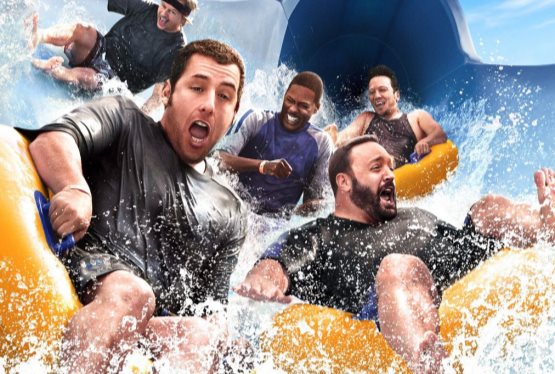