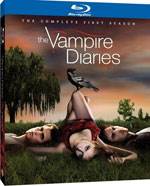 Purchase   DVD/Blu-ray/4K UHD
After the success of Twilight, studios and television networks started searching for the next Vampire series that they could profit on.  One of them to stand out from the crowd was The Vampire Diaries, by L.J. Smith.  This series could have been glossed over by any writer, stayed on the air as fodder, and then been done with.  However, after the property was picked up, the task of developing the property was given to the very talented and skilled, Kevin Williamson (Dawson's Creak, Scream, I Know What You Did Last Summer).
The Vampire Diaries Season 1 tells the story of Elena Gilbert's (Nina Dobrev) first day back at Mystic Falls High School since the tragic death of her parents.  Along with her Aunt Jenna (Sara Canning), Elena tries her best to look after her troubled younger brother, Jeremy (Steven R. McQueen), and salvage what family they have left.
During the course of her first day back at school, Elena meets the mysterious new student at school, Stefan Salvatore (Paul Wesley).  What Elena doesn't know is that Stefan is a vampire, constantly resisting the urge to taste her blood.  As they grow closer, Stefan's dangerous older brother, Damon (Ian Somerhalder), shows up to wreak havoc on the town of Mystic Falls - and claim Elena for himself.
While Kevin Williamson was doing publicity for the first season of the show, he constantly referred to the fact he didn't want to make another "90210 Vampire Show".  He wanted Vampire Diaries to be about something deeper, about the town of Mystic Falls and its history.  He definitely succeeded on every level imaginable and much more.
The cast of The Vampire Diaries is simply amazing.  There is not one cast member that does not stand out in their roles; from the three main stars (Nina Dobrev, Paul Wesley, Ian Somerhanlder), to the secondary characters and guests, there is not one actor or actress who is not perfect for their role.
While the Vampire Diaries started out the first season a bit on the weak side with a plot that was paper thin, every episode of the series got better and better until the mind-blowing season finale that will make you glad that you can now watch Season 2 on the CW without waiting an entire summer.

The picture quality of the Vampire Diaries encoding in VC-1 is a bit of a  mix.  At times, the pictures appear amazing, and at other times the blacks are a bit grainy.  However, the Dolby Digital 5.1 audio is far superior over the television show disc and really packs a punch.

One nice feature of the Blu-ray set is the ability to resume where you have left off -- a feature missing from most Warner Bros Home Entertainment Disc.  We, also, get a few standard features such as deleted scenes, a blooper reel, Pilot Commentary, Into Mystic Falls, A New Breed of Vampires , When Vampires Don't Suck! , A Darker Truth Webisodes, Vampires 101, and an audiobook entitled  The Awakening.
If you are a vampire fan, or interested in  just great television that will let you escape the world, then The Vampire Diaries is a must.

For more information about The Vampire Diaries visit the FlickDirect Movie Database. This release has been provided to FlickDirect for review purposes. For more reviews by Nathan M Rose please click here.

Allison Rose
The Vampire Diaries Season 6 maybe the saddest and bloodiest one so far.  From other worldly prisons, to a new witch/vampire hybrid, the supernatural dimension went into overdrive this year.
Full Review | Grade: C

Allison Rose
The acting is exactly what we have come to expect from these actors the last 8 years and they stay true to form.  The various directors, including Somerhalder, Wesley and series creator Julie Plec (The Originals), seamlessly move from one episode to the next without losing the feel of the season.
Full Review | Grade: B