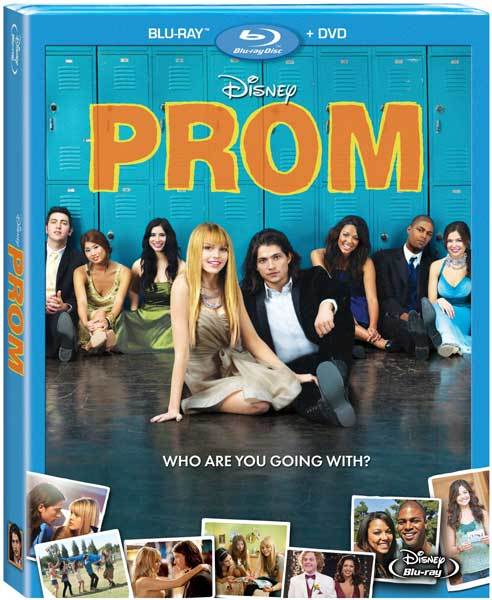 Purchase   DVD/Blu-ray/4K UHD
The latest entry from Walt Disney Studios in an effort to grab the tween/teenage market is coming out on Blu-ray/DVD combo pack on August 30.  Prom is about exactly that.  A prom at an ordinary high school.  Similar to the idea behind "Love Actually", where you have an event, and then you learn the stories behind everyone, this movie follows six groups of kids in the few weeks leading up to their high school prom.  While it seems very basic, the premise generally works as there is just enough differentiation in the groups to keep you interested in their story, but not too many that you can't keep track of them.

The movie holds its' own for the first 2/3, then falls into the obvious clichés that appear with storylines that involve "good girl, bad boy" romances, and causes the ending to be mostly foretold early in the movie.  Aimee Teegarden and Thomas McDonell star as those two, Nova Prescott and Jesse Richter, respectively.  Nova is your typical overachieving, very intelligent character, who is in charge of preparing the prom, and  wants her also very intelligent friend to ask her out to the prom.  The problem is that he too is extremely intelligent and would rather go to a college interview the weekend of prom.  Soon after however, the prom decrations are destroyed in a fire, and Jesse comes into her life to serve his school detention.  Jesse is your typical bad boy from a single parent home.  As the movie goes on, both of them learn from each other as the story progresses to the finale: Prom.  Both actors are relative unknowns, yet they don't appear to be, with believable acting that draws you into their story, as they both grow together with a wonderful script – when you exclude the clichés.  The other couples mainly revolve around friends of Nova – those who helped her prepare for prom, and their own couple issues, as well as a group of sophomores and their attempts to have a relationship.  The side story with the sophomores is the relationship between two best friends who are boys – they spend most of their free time talking about various music questions, and can't be separated.  Until one of them starts trying to have a relationship with another sophomore.  Their story is not important to main crux of the movie but was nicely done. The real star of this movie, however, is Nicholas Braun, who plays Lloyd Taylor.  Lloyd is your average high school senior, usually quiet, never gets in trouble, but also never takes any chances.  Until his step-sister encourages him to get a date and go to prom.  The entire movie involves his misadventures in trying to ask most of the girls in school out.  In fact, they filmed so many of these that the filmmakers made a short of the ones that missed the cut, calling it "Last Chance Lloyd", and is worth the time watching after you've finished the movie.  But don't worry, he'll be fine in the end.

The combo pack includes both the Blu-ray and the DVD, but no digital copy.  The images are crisp, and looks wonderful in high-definition with no distracting elements like film grain to take away from the experience.  The music that is constantly changing (this is a movie about high school, and music does have a minor subplot) sounds great through the PCM/Dolby Digital sound.  Apart from the Last Chance Lloyd short, there is also a making of featurette and bloopers on the Blu-ray.  If you've got young tween/teenage girls in your house you will probably already be planning on buying this movie.  If you don't, go ahead and give it a chance.  You'll probably like it.

After my review of the Prom Blu-ray released, the director of the short film Last Chance Lloyd, Taz Goldstein, reached out to me.  I was incorrect in stating that this short was a collection of items not included in the film.  It is actually a short film in its' own right, that was good enough to actually have one scene from it included in Prom.   The scene that was part of the short and included in the movie is where Lloyd is trying to ask one of the students out to prom by putting post-it notes all over the windshield of her car (a Prius) in such a way that it spells out "PROM ?".   The only problem is….it wasn't a student's car.  A teacher actually drove the same exact color Prius and that is who Lloyd plastered the Post-Its on.

The short was filmed at the same time as the main movie, in the same school setting.  Taz told me that what happened was that Disney wanted to shoot something else at the same time, and realized that Lloyd's character was great, so they made him the focus of the short.  So while the main crew was filming Prom, Taz was one floor above them shooting the short film.  "We had to wait for Joe [the director of Prom] to call "cut" before I could call "action."  It was insane…but fun." is how Taz explained it to me.

Now knowing this about the short film makes it worth even more to the disc as it does look like it was just cut scenes rather than an independent short on its' own.  By filling in the gaps with Lloyd's storyline as presented in Prom, Last Chance Lloyd really makes Prom complete.

Maureen Buccellato
Disney "Prom" is a film made about -- you guessed it -- the Prom!  This squeaky-clean high school film is a breath of fresh air from the usual high-school- themed films that one sees nowadays.  Hokey?  Maybe, but it is nice to be able to bring a young girl to a movie without...
Full Review | Grade: C