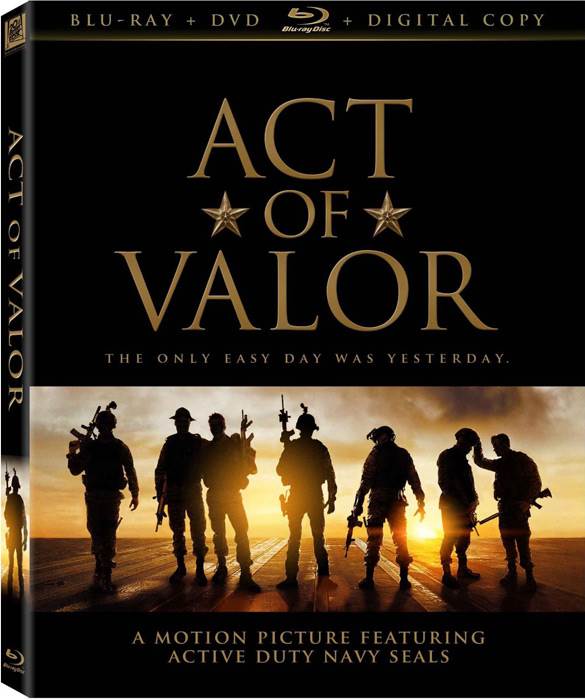 Purchase   DVD/Blu-ray/4K UHD
It isn't enough to call the men of SEAL Team 7 heroes; that's easy to see. They are much more complicated than cardboard cutout supermen. Act of Valor is a good ol' fashioned war movie, in the vein of those old WWII movies where the good guys kill the bad guys, they wave the flag, and thank God unabashedly. These are men who willingly put themselves in harms way in order to keep the country they love and the people who live there safe.

The mission that Act of Valor lays out for us simple: extract CIA agent Lisa Morales (Roselyn Sanchez) who's been kidnapped in Costa Rica by a smuggler named Christo (Alex Veadov) who's in cahoots with notorious Jihadist Abu Shabal (Jason Cottle). But that isn't where things end. As SEAL Team 7 retrieves the target, they discover intel regarding Shabal's plans to wreak havoc on the US via a massive terror attack, and must now do what they do best—flush out the terrorists and stop the plot before thousands of Americans are killed.

When it was released, Act of Valor was criticized for its one-sided point of view and reverence for the SEALs. These days if a film doesn't show American servicemen as baby killing maniacs it's considered untrue. What probably offends those who condemn this film is the unapologetic way with which it shows our military killing terrorists, with no signs of remorse. There are no shades of gray here; it's clear who the bad guys are and there's very definitive sense of what's right and wrong, something that's sorely missing in modern movies.

With authentic Navy SEALs in the lead roles, another audience complaint centered on the cast. Granted, though these weren't Oscar-worthy performances but could we have really seen someone like Keanu Reeves in this film? In fact, these guys seem perfectly comfortable in front of the camera; the performances are natural, and it appears as if they're speaking to one another the way they would in real life.

One might think a film as militaristic as Act of Valor would be awash in political statements, but nothing could be further from the truth. We see the SEALs in their element, with barely a mention of Washington. This is an action movie, pure and simple, full of shooting, killing, and splattered brains, without a hint of political maneuvering.

Underlying Act of Valor's action is a story of the SEALs as a family. In fact, they spend the night before heading off to Costa Rica with their wives and children hosting a BBQ on the beach. It's this aspect that really sets the tone of the film, with a sense of duty, honor, and camaraderie that brings these men closer than what you often see between biological brothers. This is the side of Act of Valor most critics miss, focusing instead on their distaste for war. It's easy to dehumanize SEAL Team 7 as cold blooded killers, but whether you agree with it or not, they're only doing their job.

Now out on Blu-ray, the comes with a host of features that allow you to get a real feel for the mindset these amazing indivduals live in. Visually the movie is crisp and clear, indistinguishable from a big budget movie using far more expensive equipment. The sound mix does a great job of making the dialogue easy to hear while balancing it with scenes of explosions and gunfire. As for those special features, check out the directors commentary, deleted scenes, interviews with the real Navy SEALS, a making of video, and a music video.

Regardless of your views on the military and war in general, Act of Valor is a good stand alone action flick that doesn't pit one political view against another. The fact that the SEALs didn't want any mention in the credits typifies who these men are. They do their job and serve their country as a unit; no individual achievement outshines the work of the team. In the film, as in real life, they complete their job with little or no fanfare, and move on to the next mission.
Cast:
Directed By:
MPAA Rating: R

For more information about Act of Valor visit the FlickDirect Movie Database. This release has been provided to FlickDirect for review purposes. For more reviews by Chris Rebholz please click here.

Act of Valor images are © Relativity Media. All Rights Reserved.

John Delia
An Act of Valor is a must see!
Full Review | Grade: A