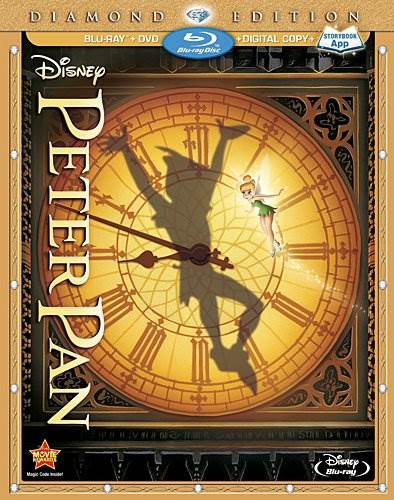 Purchase   DVD/Blu-ray/4K UHD
Peter Pan: a long-awaited addition to Disney's Blu-ray canon that should make anyone's collection feel more whole, more complete. It isn't just a personal favorite either. It's one of Walt Disney's most beloved animated classics, one of the studio's greatest treasures and arguably the best Disney animated feature released in the 1950s. It has survived controversy -- Tiger Lily and the Indians are still considered racially offensive in various circles -- and weathered criticism about the liberties Uncle Walt and his screenwriters took with J.M. Barrie's 1904 play and 1911 children's novel. And yet no censorship has been perpetrated and very little criticism has prevailed. It's a high-flying, swashbuckling adventure in the true spirit of the original and, in many ways, was the first production, on stage or off, to lend a thrillingly palpable sense of magic, grandeur and storybook fantasy to Barrie's text. Even today, some sixty years after its theatrical release, Peter Pan remains a magnificent animated film, as truly timeless as any Disney classic that came before it or come since.

On a crisp starry night, after an argument with her father (voiced by Hans Conried), a girl named Wendy Darling (Kathryn Beaumont) lies down in the nursery she shares with her younger brothers, John and Michael (Paul Collins and Tommy Luske), and drifts to sleep. Suddenly she wakes, not with a fright but with excitement to finally meet the fairytale boy she's long suspected exists: Peter Pan (Bobby Driscoll). Soon she embarks on an adventure to Never Land, joined by her brothers and Peter's temperamental fairy Tinker Bell (Margaret Kerry). There they meet the villainous Captain Hook (Conried), his lackey Mr. Smee (Bill Thompson) and the pirates of the Jolly Roger, a murderous band of thieves and killers intent on capturing Pan and putting an end to his antics. With the help of the Lost Boys, the noble Tiger Lily (Corinne Orr) and her tribe, and a few sprinkles of fairy dust, Peter, Wendy, John and Michael set out to stop Hook, as the young girl decides whether she wants to grow up or stay a child forever.

Literary buffs will find the aforementioned changes to J.M. Barrie's original story startling, and they indeed lead to dramatic shifts in the dynamics and motivations of the characters and ultimately the tale itself. But creative license has always been at play in Disney adaptations, making the impact of such changes far more inconsequential than a vocal minority of detractors protest. The racial stereotyping is a bit more disconcerting, but just as easily dismissed. A quick conversation about history and context is all a young boy or girl needs to navigate tricky waters with ease. Which leaves... next to nothing to worry over. Peter Pan is a spry, oft-times dazzling adaptation, as harmless as it is memorable. Be it the character designs, the lush Never Land locales, the exciting battles or the mounting conflict between Pan and Hook, the film is brimming with unforgettable sights, sounds, heroes and villains; the sort that make children's eyes wide and smiles broad. And though the result is most certainly episodic in nature, the adventure is no less epic and never seems small or trivial, as could have been the case had Disney and his fellow filmmakers taken a different route with the adaptation. (The film went through many, many iterations during development, a number of which are detailed in the Blu-ray edition's behind-the-scenes extras.)

Peter Pan also harkens back to a wondrous age in animation, before the advent of CG and the misguided belief that traditional, hand drawn animation was outmoded. Pardon the nostalgic digression, but Walt Disney's fourteenth animated feature, now celebrating its 60th anniversary, has the look and whimsy of a much younger production. With no computers to rely on, Pan's legendary team of animators -- the Nine Old Men -- crafted something extraordinary for its time and something that continues to withstand the test of time. The beautifully expressive characters do nothing less than spring to life, while each acrobatic bout of flying, singing, dancing and swordplay is framed by gorgeous hand-painted backgrounds. Even now, with Disney aggressively resurrecting the hand-drawn feature, classics like Peter Pan stand tall, created entirely with pencils, ink, brushes and paint, and all the passion and spirit that goes into such hands-on artistry. There's something utterly magical about Walt Disney's early animated classics, and it's a magic that continues to grab hold of viewers, young and old, nostalgic and newcomer alike. Simply put: Peter Pan is one of the Disney greats, and that isn't about to change anytime soon. "All this has happened before, and all this will happen again..."

Peter Pan flies onto Blu-ray with a vibrant, striking video transfer, restored -- or rather renewed -- with all the digital advances available to the Disney restoration team. Disney's DTS-HD Master Audio 7.1 surround track crows at the top of its lungs and unleashes its sonic attack with notable precision. When it comes to Special features, there is no shortage. Starting with an Introduction by Diane Disney-Miller: Diane Disney-Miller provides a quick introduction to the film, touching on her father's attraction to adapting J.M. Barrie's tale and the artwork created during the film's development.

Audio Commentary: Roy Disney hosts this extensive audio commentary, taken from the film's previous DVD release. Disney dryly reads from preprepared notes, but the interview excerpts and commentary bits featured over the course of the commentary allow the film's animators, voice actors and filmmakers to offer their insight as well. Smartly compiled and edited, the track touches on every aspect of Peter Pan, without wasting a single second.

Growing Up with Nine Old Men: The name started as a joke. A term of playful endearment Walt Disney gave to his lead animators. But it soon became a badge of honor for the most legendary and influential animators in Disney history. Hear about the Nine Old Men from those who were closest to them -- their children, now upwards in years themselves -- and learn about the artists' contributions and work, both personal and professional.

Classic DVD Bonus Features - Backstage Disney: Five behind-the-scenes featurettes and documentaries include "You Can Fly: The Making of Peter Pan," "In Walt's Words: Why I Made Peter Pan," "Tinker Bell: A Fairy's Tale," "The Peter Pan that Almost Was" and "The Peter Pan Story."
Classic DVD Bonus Features - Music & More: "Disney Song Selection," Deleted Song: The Pirate Song," "Never Land: The Lost Song," "Music Video: Never Land, performed by Paige O'Hara" and "Music Video: The Second Star to the Right, performed by T-Squad."
Disney Intermission: Pausing at any point during the film allows younger viewers to tackle "Pirate Training," a series of tips, mini-activities and video clips helmed by the first mate of the Jolly Roger.

Peter Pan Sing-Along: An optional Sing-Along track, easily engaged or skipped when selecting the "Play" option in the main menu. It's a simple subtitle feature, though. No karaoke-style guide marker or highlighting.
DisneyView Side Bars: Fill the black bars to either side of the image with artwork from Walt Disney background painter Cristy Maltese (The Little Mermaid, Beauty and the Beast and Aladdin).

Peter Pan isn't going anywhere. As much a classic today as it was twenty, forty or sixty years ago, it remains the wondrous adventure and magnificently animated spectacle it's always been. With Disney's Blu-ray release, it's even more wondrous and magnificent. Backed by a stunning video presentation, a strong DTS-HD Master Audio 7.1 surround track, and well over four hours of special features, the new Diamond Edition release of Peter Pan is a must-have for any Disney fan or animation aficionado. Don't hesitate: make the leap.
Cast:
Directed By:
MPAA Rating: G

For more information about Peter Pan visit the FlickDirect Movie Database. This release has been provided to FlickDirect for review purposes. For more reviews by Chris Rebholz please click here.

Allison Rose
If you have young ones or are a new grandparent, I recommend picking this release up of Peter Pan today if you don’t already own it.
Full Review | Grade: B