The Pyramid is an unfortunate film that should not have been made. 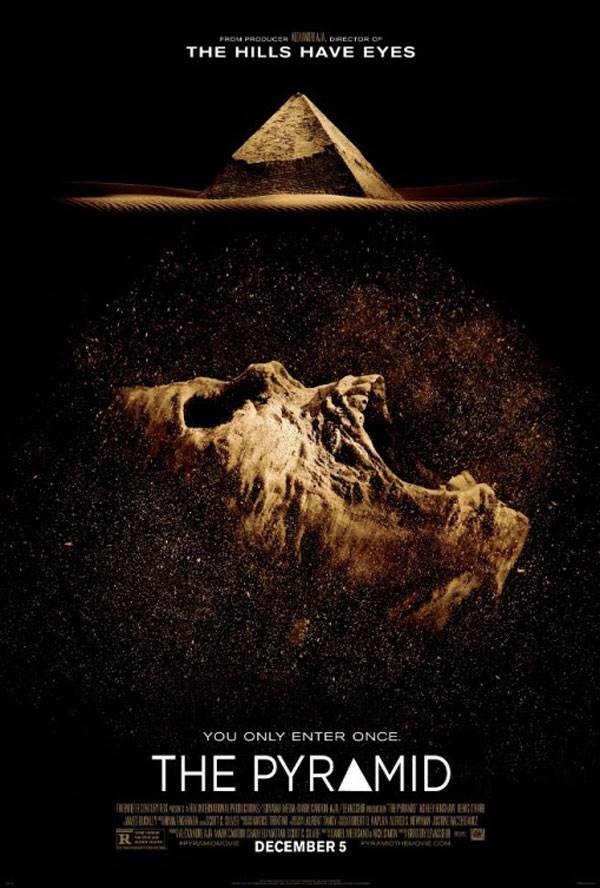 Modern cinema's fascination with ancient Egypt and mummies can be traced back to 1932 and the release of The Mummy from Universal Studios starring Boris Karloff. Now, 20th Century Fox and Silvatar Media release The Pyramid to the world.

Taking its cues from other "found footage" films, the film follows a group of archaeologists and a camera crew as they set out to explore a pyramid. What is unique about this one compared to the rest of the world is that it only has three sides. After being told that the civil unrest in Egypt will prevent them from continuing their research, the team decides to forego all caution and enter the pyramid themselves. As you can imagine with films such as these, things do not go well for them, and they find themselves trying to fend off an ancient evil and fight to stay alive.

While the film starts out with an engaging exposition, it quickly falls flat 5 minutes into it.  The characters are extremely unlikable save for Nora played by Ashley Hinshaw (True Blood), and, I was actually cheering a bit as each character got picked off one by one. Since the format for this type of film lends itself to having most of the weight of the film carried on the actors, it is a shame the cast of the film gave such abysmal performances.  I didn't find it a bit scary and ended up laughing at times which is never good for a horror genre movie.

I am not sure what first-time director Grégory Levasseur was thinking when he made this film. The overall tone of the film wasn't really horrific and a lot of the scenes just felt like anyone could have put them together.  Could it possibly have been the shoestring budget of 6.5 million that hampered his directing? Who knows. If Levasseur does get another directing job, and his sophomore effort is like this one, he has little chance of success in this industry.

The Pyramid is an unfortunate film that should not have been made. If it had a higher Hollywood budget, a non "found footage" filming, and Michael Bay as a director at least it may have been entertaining; but, as it stands, The Pyramid should be put inside one and never be discovered again. However, if you are looking for background noise on the television while you are attempting to do other things at home, this might be right up your alley.

For more information about The Pyramid visit the FlickDirect Movie Database. This release has been provided to FlickDirect for review purposes. For more reviews by Nathan M Rose please click here.

The Pyramid images are © 20th Century Fox. All Rights Reserved.