Written and directed by the legendary Rob Zemeckis, based on Dahl’s work and with the talent listed above, one would think that this movie would be a slam dunk. 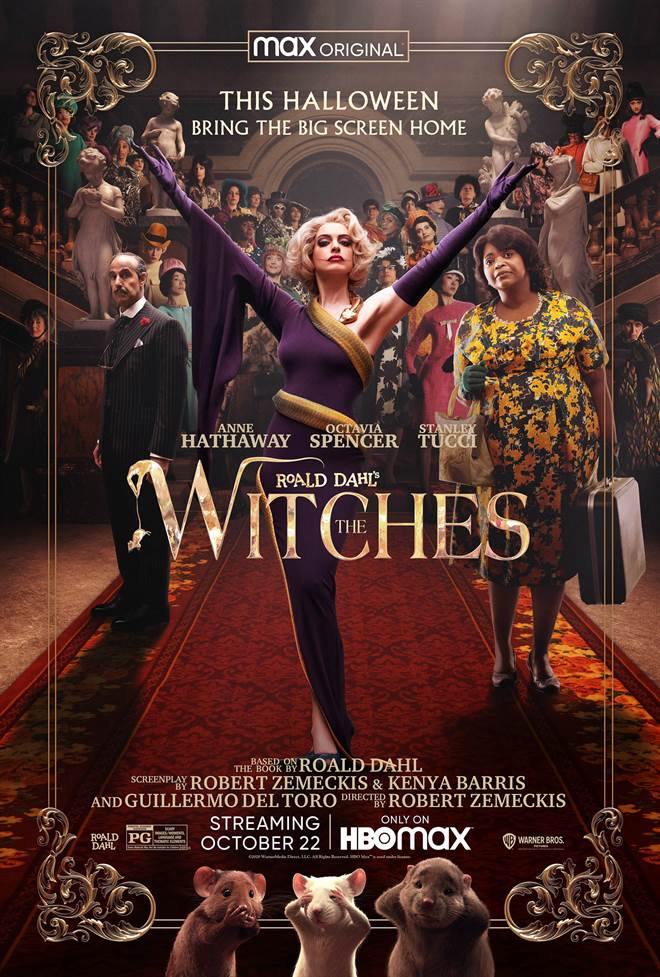 When one hears the name Roald Dahl, one generally thinks of the collection of children's stories he wrote.  Dahl usually made the protagonists children with adults portrayed as villains.  However, there always seemed to be one adult who was a kind soul that helped the children defeat their enemies.

Since Dahl was such a descriptive writer it is only natural that many of his novels lent themselves to movie adaptations.  To date, six of his children's books have been made into films, with Charlie and the Chocolate Factory getting two different adaptations.  This year, another story will have its second retelling when The Witches premieres on HBO Max.

Narrated by Chris Rock (The Longest Yard), the film begins with him telling a group of people that witches are real and that they hate children.  It then flashes back to when Charlie was young, and his parents are killed in a car crash.  Charlie goes to Alabama to live with his grandmother, Agatha (Octavia Spencer; Hidden Figures), and one day while they are in the grocery store, Charlie is approached by a strange-looking woman who offers him candy.  When Charlie tells his Grandmother she immediately takes Charlie away in order to protect him.

Through a family member, Agatha is able to take Charlie to a posh hotel near the ocean.  While there, they see a group of women arriving for a conference to stop cruelty towards children.  Of course, this is all a front for the witches to meet and discuss the Grand High Witch, Lilith's (Anne Hathaway; The Dark Knight Rises) plan to use the potion she has created to turn all the children of the world into mice.  Lilith manages to capture Charlie, who has been spying on the witches' meeting, and uses the potion on him.  Knowing of her plan, Charlie gets Agatha and his friends to help him defeat Lilith and the witches in order to save all the children.

Besides Rock, Hathaway, and Spencer, the cast also includes Stanley Tucci (The Devil Wears Prada) as the Hotel manager, Kristen Chenoweth (Pushing Daisies) as Charlie's pet mouse who it turns out is really a little girl, and, making his feature film debut, newcomer Jahzir Bruno as Charlie.  Amongst all this talent, Spencer and Bruno are the standouts.  They have great familial chemistry making their on-screen relationship believable.  Tucci is always a favorite actor of mine and he doesn't disappoint in his role).

Written and directed by the legendary Rob Zemeckis (Back to the Future), based on Dahl's work and with the talent listed above, one would think that this movie would be a slam dunk.  Sadly, it isn't.  Hathaway is a caricature of Dahl's Grand High Witch and, while she might possibly seem scary to children, she comes across as almost laughable to adults (and not in a good way).  Spencer is delightful to watch as always as she combines compassion with a protective "mama bear" intensity.  Tucci was underutilized here but Chenoweth drips southern charm.

I am a big fan of both versions of Charlie and the Chocolate Factory, though I will always have a soft spot for Gene Wilder's rendition of Pure Imagination in the first film.  Unfortunately, I haven't enjoyed some of the other film adaptations of Dahl's writings and this new version of The Witches is among them.

The production value is excellent though Lilith's feet look as if they are cursing the audience out which made me laugh.  I also found it funny (which it was supposed to be) when the witches started flying throughout the dining room like kernels of popcorn.

I'm not sure if The Witches was supposed to be the "new" Hocus Pocus in terms of Halloween cult films that are resurrected every year, but I don't see it garnering the same kind of following as the former fill.

For more information about The Witches visit the FlickDirect Movie Database. For more reviews by Allison Rose please click here.

The Witches images are © Warner Bros.. All Rights Reserved.