Home / Reviews / Can You Ever Forgive Me?

Can You Ever Forgive Me? is a pleasure to watch even as you witness Israel’s world crumbling around her. Some of McCarthy’s finest work to date. 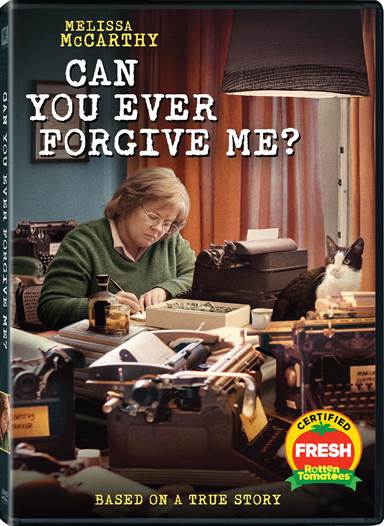 Purchase   DVD/Blu-ray/4K UHD
Melissa McCarthy is known for her comedic roles in films.  While having played smaller parts she really stood out as Megan in 2011's Bridesmaids. Since then she has made audiences laugh in hits such as This is 40, Spy and Life of the Party.  This past year she took on a more dramatic role-playing real-life writer Lee Israel in Fox Searchlight Pictures' Can You Ever Forgive Me?  Based on Israel's 2008 memoir of the same name, the film chronicles the time when Israel was down on her luck and, quite by accident originally, fell into a life of crime to make ends meet.

Lee Israel wrote historical biographies and even landed on the New York Times bestsellers list at one point but she had not sold a book or magazine article in years and her publisher wasn't returning her calls.  She was months behind on her rent, her cat was sick and she was just fired from her most recent job.  As she was researching her latest biography she found an authentic letter in an old book.  Desperate she sold the letter and discovered a new source of income.  When one of her buyers suggests the letters would be worth more with better content, Israel decides to "embellish" the next letter by adding a postscript that wasn't really there.

With a new found confidence Israel decides to start creating "works of art" and selling them around town until suddenly she finds out her name has been placed on a list and the FBI is investigating her for selling forgeries.  When one of her buyers blackmails her for $5000 in order to remain silent, Israel begins to steal real letters from research libraries, replacing them with forgeries and, with the help of her accomplice, Jack (Richard E. Grant; Logan), proceeds to sell the real stolen letters.  However, when the FBI questions Jack he informs on Israel.  Both are sentenced to probation and Israel is forced to get a real job in order to pay restitution to her victims.

In real life Israel was said to have not been a very nice person and at one point in the film her publisher has a frank conversation with Israel explaining that part of the reason her books don't sell is because Israel doesn't "play the game" and schmooze the media and the public like other writes (i.e. Tom Clancy) do.  McCarthy's Israel is certainly unlikable – she steals an overcoat from a party at her publisher's home and often tells people to f#@k off – but you can't help but feel a little bit sorry for her even as you watch her rip off small bookstore owners.   Her portrayal of this double-edged persona is the reason McCarthy has been nominated for almost every best actress award this year and why she is up for an Oscar.  She plays Israel with equal measures of loathing and pathetic sadness, which is why the audience hates Israel and pities her at the same time.

Grant (who is nominated for the Best Supporting Actor Oscar) is also magnificent as Israel's degenerate sidekick and cheerleader.  The chemistry between the two actors is part of what makes the movie so enjoyable and some of the reason the viewer isn't automatically appalled by their illegal and immoral behavior.  Together they shine and move the story along at a solid pace.

The movie is only being released on DVD and Digital so if you don't have download capabilities (or are simply unaccustomed to that form of technology) you will have to miss out on the 1080p resolution picture quality that I am sure would enhance the bookstore scenes.  However, even without this, the film is still steeped in minute details that remind many of a bygone era when there was a "mom and pop" bookstore on every corner of Manhattan.  The disc does come with a few extras including deleted scenes, audio commentary and the featurettes "Elevator Pitch," "Becoming Lee Israel," "Likely Friends" and "A Literary World" plus a Lee Israel letter gallery; and unit photography.

With the script and cast in director Marielle Heller's (The Diary of a Teenage Girl) capable hands Can You Ever Forgive Me? smoothly tells this real-life story beautiful.  It's a pleasure to watch even as you witness Israel's world crumbling around her.  Some of McCarthy's finest work to date.

Purchase a DVD/Blu-ray/4K UHD physical copy of Can You Ever Forgive Me? today at Amazon.com

Download Can You Ever Forgive Me? in Digital HD/4K from the iTunes store.

For more information about Can You Ever Forgive Me? visit the FlickDirect Movie Database. This release has been provided to FlickDirect for review purposes.