Non-Stop Is An above average film with a good measure of suspense. 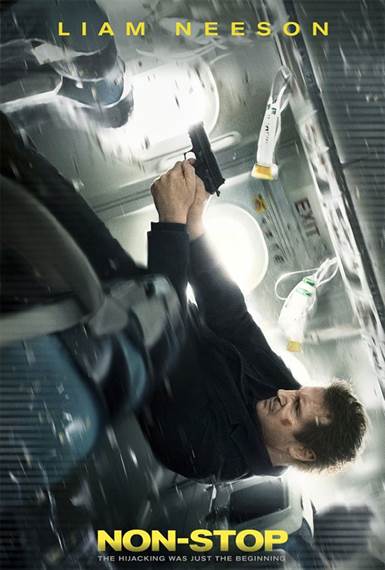 Purchase   DVD/Blu-ray/4K UHD
Filled with suspense and edge of your seat thrills, Non-Stop does a good job of keeping the audience off balance to the very end.   Directed by Jaume Collet-Serra who helmed the horror thriller Orphan combined with notables in lead roles, the film has excellent potential for a good weekend run.  If you like your movies taut with twists that keep you guessing, then Non-Stop should put you on the right runway.

A troubled Bill Marks (Liam Neeson) who has been battling alcoholism and the daemons that caused it gets an Air Martial assignment he's reluctant to take.  Flying from New York to London, the transatlantic flight has a full load of passengers as he takes his first class passenger seat.  Familiar with his flight attendant Nancy (Michelle Dockery) she sets him up with water after he had asked for a gin and tonic. He's seated next to Jen Summers (Julianne Moore) a passenger who has managed to change her aisle location in favor of a window. Not much happening Bill settles back in his seat experiencing take-off jitters as he usually does on all flights he takes.

After ascending to cruising altitude Bill gets a text message on his cell from someone on the plane demanding $150 million.  The person writes that someone will die every 20 minutes until the money is transferred to a special account.  Cautious that it may be a prank from either Jack (Anson Mount) the other Air Marshal on the flight or his boss at headquarters, he replies hoping for a affable answer. When the texts keep coming with warnings and the first person ends up dead, Bill starts to look for threads that will lead him to the killer.

The very suspenseful film gets right into the meat of the plot adding twists and putting Bill in death-defying situations for himself and the passengers he dedicated to protect. Director Jaume Collet-Serra keeps his film tight bringing possible suspects into the mix before clearing them to ease the tension.  There's even some comic relief in the film, most of which gets silly for Collet-Serra's rapt audience that have been concentrating on every move his main character makes.  But, nicely spooled out with a labyrinth of ‘dead' ends, there's never a dull moment in his mystery.  When he enters the finale exposing the perpetrator, the airplane itself becomes a predicament to deal with as well.

As far as the acting goes, Liam Neeson looks like he has just stepped out of his role as Bryan Mills in Taken.  He carries over that determined and tough persona that has been filling theater seats ever since Taken took the world by storm.  Perfect for the character however, his Bill Marks has a head full of problems and he depicts the facade created by them extremely well. Even under accusations that he may be the hijacker, he's bold enough to fight off dissenters and keep focus on the problem at hand. When Collet-Serra adds a soft side to Bill Marks, Neeson's right there showing he can compose his character to tug at your heart strings.

Julianne Moore puts on a good show vacillating between trustworthy and suspect in her role as passenger Jen Summers.  Putting herself in danger off and on, Moore makes her character a tough cookie and cunning as well.  Faced with helping Bill keep his credibility, she shows her support in the face of an angry group of passengers.

Although there have been several films involving air piracy with threats of ransom or deeds of terrorism (e.g. Airport, Flight Plan, Red Eye, Executive Decision), this one has an edge that makes it special.  I know I'm going to get some heat from those colleagues that are realists, but Non-Stop in my estimation has a much scarier and pragmatic plan considering today's technology, albeit a plot trick. If you let your mind accept the fictional script as a realistic situation, you'll enjoy the film even more.

Non-Stop has been rated PG-13 by the MPAA for intense sequences of action and violence, some language, sensuality and drug references.  Be cautious in allowing immature children see the film as there are some scenes that are very realistic and scary.

FINAL ANALYSIS: An above average film with a good measure of suspense. (C+)

Download Non-Stop in Digital HD/4K from the iTunes store.