For those looking for a jump out of your seat, wet your pants, scary, gory slasher film, The Visit isn’t it.  It is more psychological in nature and what I would classify as a thinking man’s horror thriller. 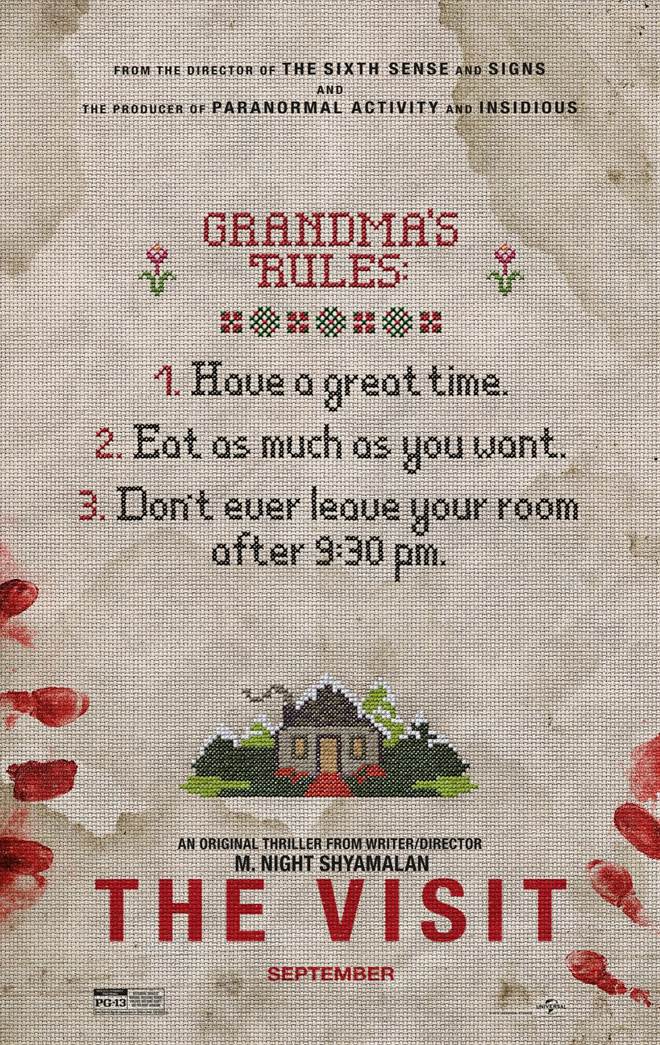 Purchase   DVD/Blu-ray/4K UHD
Like some of M. Night Shyamalan's other movies, The Visit ends with a twist you didn't see coming.  I expected the typical poltergeist infestation or supernatural explanation for the characters' behavior, but what I ultimately got was much darker and more realistic.  It almost makes you wonder what sort of demonic dialogue goes on inside his head to think of this stuff, yet makes you cautious enough not to really want to delve too far into it.

Kathryn Hahn (Parks and Recreation) plays a single mother who is estranged from her parents after leaving home at 19 with her then older, substitute teacher boyfriend who eventually becomes her ex-husband.   When her parents contact her 15 years later she decides to send her children to Pennsylvania for a weeklong visit.  What they find there is more than either of them could imagine.

From all outward appearances, Nana (Deanna Dunagan; Unforgettable ) and Pop Pop(Peter McRobbie; ) seem like a sweet old couple who just want to get to know their grandchildren Becca (Olivia DeJonge; Hiding) and Tyler (Ed Oxenbould; Alexander and the Terrible, Horrible, No Good, Very Bad Day).  However, the longer Becca and Tyler spend with their grandparents, the more they realize something isn't quite right with the older couple.

The star of this film, it turns out, is 14 year old Oxenbould.  I thoroughly enjoyed him in Alexander and he is no less terrific in this role.  He becomes the focal point of every scene he is in and shows a depth of character despite his young age.  Dunagan, a Tony award-winning actress, is excellent as the mentally disturbed Nana and adding to the mix in a supporting role, Hahn is great as she consistently is in all her roles.

While on the short side at 94 minutes, the film carries the stamp of a Shyamalan written and directed film and the addition of the "documentary style" footage makes for an interesting juxtaposition.   Unfortunately, for a horror film I didn't find much of it scary and since I hate horror films it says something about the "scary" element.  I would instead classify this movie as a mysterious thriller, as you will find yourself speculating what is really going on most of the time.  Additionally, for a horror film, The Visit is actually funny at times, which was unexpected and welcomed.

For those looking for a jump out of your seat, wet your pants, scary, gory slasher film, this isn't it.  It is more psychological in nature and what I would classify as a thinking man's horror thriller.  Unfortunately, while the premise is interesting it doesn't do a great job keeping the audience entertained the whole time, which, as I mentioned, isn't all that long to begin with.

While one of Shyamalan's better works in recent years, it doesn't have the same depth as The Sixth Sense and the script feels a little bit lacking in plot and character development.  Something about this film just seems off and almost as if it was rushed to be made.

Is it an "ok" film? Yes.  Is it great?  No.  Should you go see it? Well, if you are like me and don't like horror films but want to get into the "Halloween Spirit", it's a decent effort and horror "lite".  Grade: C

Purchase a DVD/Blu-ray/4K UHD physical copy of The Visit today at Amazon.com

Download The Visit in Digital HD/4K from the iTunes store.

For more information about The Visit visit the FlickDirect Movie Database. For more reviews by Allison Rose please click here.

The Visit images are © Universal Pictures. All Rights Reserved.

Read More Reviews For The Visit