Although Skyfall was always going to be a tough act to follow, Spectre does manage to hold its own, and it seems to tie in the previous three films that feature Daniel Craig nicely. 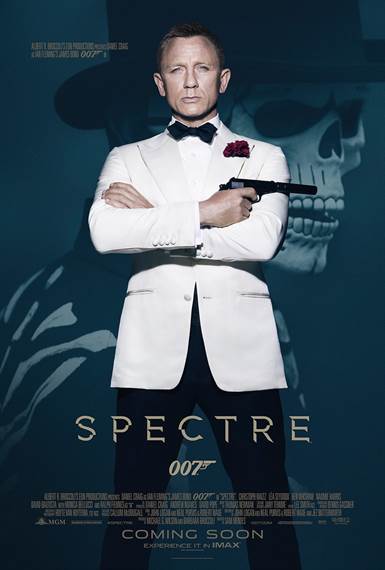 There's no getting away from the fact that Skyfall was one of the best if not the best Bond movies ever made, so keeping continuity for the Bond 24 was paramount if it were to equal in success. Thankfully, that's the case, and Daniel Craig returns again for his fourth outing as the British super spy. Sam Mendes directs, as the franchise moves back more towards a traditional Bond movie, unlike Skyfall, which was more a movie about the darker side of the man himself.

The opening sequence of any Bond movie can be as entertaining as the movie itself, and Spectre does not disappoint. Set in Mexico City on the Day of the Dead, and shot in one tracking shot, it's full of all the stunts and effects that you're accustom to. It leads nicely into the opening credits, and as far as opening sequences go, it has to be up there with what has gone before and certainly raises the bar for what may come in the future.

The main event opens in London, where M (Ralph Finnes; Strange Days) is under pressure from C (Andrew Scott; Sherlock) to close the 00 program, and Bond being rouge op in central America doesn't help. He is sent home with his tail between his legs and views a rather cryptic video blog from his former boss M (Judi Dench; Skyfall). Bond then goes to Rome on a trail of not just one master criminal, but a whole organization of them. Duly ruffled, he is set upon by Spectre's own assassin Hinx (Dave Bautista; Guardians of The Galaxy), who somewhat reminded me of Oddjob from Goldfinger. Bond and Hinx battle it out in Rome but it's not until we reach North Africa via Austria that the personal duel is settled, and the real villain of the movie Oberhauser (Christoph Waltz; Inglourious Basterds) is revealed.

The re-emergence of the British secret agent with a license to kill has got to be laid at the feet of Daniel Craig. Before Craig, Bond was a corny, smug, womanizer whose job got in the way of yet another martini. Craig's approach, right from his very first outing in Casino Royal, was more brutal, more in the ilk of a Bourne movie than a Bond Movie. Cinemagoers took to it, and now many would argue that he tops the list of the best actor to play the role. Spectre maybe his finest movie playing 007, and, alas, if rumors are true, it may be his last. It will be a shame, and pity, for the actor that has to pick up the baton. The same can be said of Sam Mendes; I hope both of them has a change of heart and are around for Bond 25.

Lea Seydoux is the leading lady; but, unfortunately, there does not seem to be a great chemistry between her and Craig. Seydoux playing Madeline Swann, the daughter of Mr. White, she sees Bond as a threat, while he wants to uphold a promise he made to her father. The other girl to grab Bonds attention is Lucia, played by Monica Bellucci. She has been making the headlines as the oldest Bond girl who just can't resist the Englishman's charms. Ben Whishaw's Q, as always, was a joy to watch.

Although Skyfall was always going to be a tough act to follow, Spectre does manage to hold its own, and it seems to tie in the previous three films that feature Daniel Craig nicely. Though the big question people will be asking each other after seeing it is, is it better than Skyfall? Personally I say no, but only by the smallest of margins.

Download Spectre in Digital HD/4K from the iTunes store.