Home / Reviews / The Legend of Tarzan

The cinematography (in The Legend of Tarzan) is spectacular and makes you want to hop on a plane and fly to Africa. 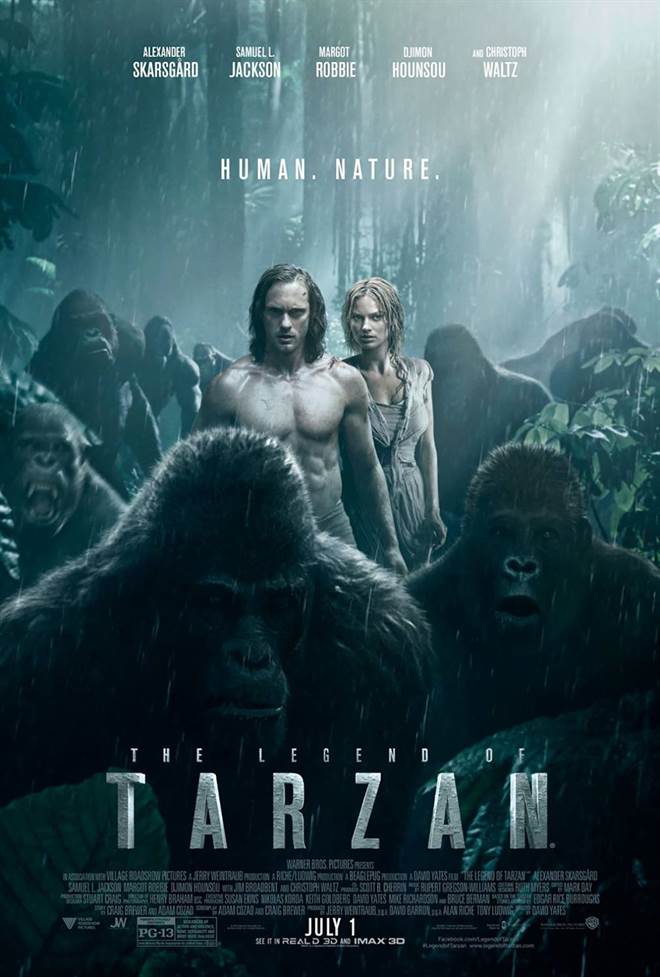 Purchase   DVD/Blu-ray/4K UHD
The story of Tarzan has been told in many different ways over 100 years.  From live action films and television shows to books and animated features, we seem to be fascinated with the idea of a man raised among animals.  The story appeals to various facets of the population and we always seem to be drawn into the animalistic male who becomes an English Nobleman.  Banking on our continued interest, Warner Bros. is releasing a new version, The Legend of Tarzan, in theaters for the July 4th holiday weekend.

John Clayton/Tarzan (Alexander Skarsgard; True Blood) has acclimated to London Society life after being raised by Gorillas in the wilds of the African Congo.  However, when an American Diplomat, George Washington Williams (Samuel L. Jackson, The Hateful Eight) implores him to return, Tarzan feels conflicted and torn.  Prompted by his wife, Jane (Margot Robbie; The Wolf of Wall Street), he agrees to go and investigate why the Belgian Monarchy is in the region and what is happening there.

When they arrive in the Congo, we discover 1) things are not good and a tyrant, Leon Rom (Christoph Waltz, Spectre), is enslaving the natives and taking over the land and 2) Tarzan killed one of the Chief's only sons and said chief is out for revenge.  These plot points make the story all the more compelling and add a different twist to the version we have seen in the past.  Of course, in the end, the tribes work together to defeat the evil Belgians and Mercenaries and reclaim their jungles.

While some might feel this movie is a vehicle for Skarsgard to be shirtless on screen, there most definitely is a story there to be told and a different viewpoint than we have seen in past versions.  It was engaging, inviting and interesting, while certainly remaining formulatic in nature.  There is the struggle between the tyrant and the oppressed, the love story, the heartbreak of losing those close to oneself and the triumphant ending that doesn't deviate from the tested" Hollywood" method.

The casting is well done and the choice of Skarsgard to play the almost larger than life legendary "ape boy" was certainly thought out.  His physique alone lends itself to his believability and his quiet demeanor speaks volumes.  My one complaint about him was his British accents which would falter or be nonexistent in some scenes, yet perfectly enunciated in others.

Robbie displays her femininity while portraying an air of strength that is often seen in many of her roles.  As Jane, it works and she matches well with Skarsgard's wild natured, yet humble, Tarzan.  Waltz has played the villain before and has done so successfully.  This turn is no different, but not necessarily inspired, and Jackson is there partially for comic relief, which he does so well.

The cinematography is spectacular and makes you want to hop on a plane and fly to Africa.  The sweeping vistas of majestic waterfalls and lush forests are breathtaking.  The graphics are well done also, and the creatures of the jungle have a realistic feel to them.

As Tarzan movies go, this one ranks up there with the better ones that have preceded it.  Beautiful visuals, a solid cast, good graphics and an interesting plot all make for an enjoyable movie going experience.  It's one that definitely should be viewed at least once in the theater.

Purchase a DVD/Blu-ray/4K UHD physical copy of The Legend of Tarzan today at Amazon.com

Download The Legend of Tarzan in Digital HD/4K from the iTunes store.

For more information about The Legend of Tarzan visit the FlickDirect Movie Database. For more reviews by Allison Rose please click here.

The Legend of Tarzan images are © Warner Bros.. All Rights Reserved.

Read More Reviews For The Legend of Tarzan