With so much “Oscar bait” clogging up this holiday season Jumanji: Welcome To The Jungle is a refreshing comedic/action bright spot in an otherwise drama-filled fare. 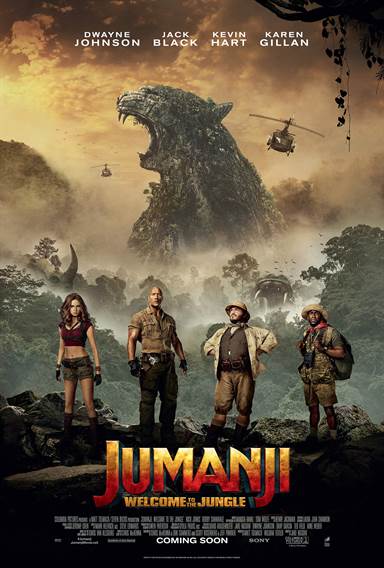 It has been twenty-two years since the original Jumanji film starring Robin Williams graced the silver screen. A lot has changed in that time - grunge music is out, pop music is in, mobile phones are no longer a luxury, but a necessity and board games are no longer the preferred form of entertainment. Video games have taken over and to that end, Columbia Pictures brings us the long-awaited sequel, Jumanji: Welcome To The Jungle.

Just like the in the "real world" 22 years have passed since the fateful day that Alan Parrish (Robin Williams; Aladdin) unleashed the game of Jumanji on his small town of Bradford, New Hampshire. Trying to find new victims to entice, the board game has now morphed itself into a retro-style video game that four kids find during a detention at school. Mistaking the game as a way to waste time, the four set about to play it in order to shrug off the menial tasks they were given. Unbeknownst to them the game is alive and has a mind of its own whisking the four of them off into the world of Jumanji.

However to complicate matters even more, once in Jumanji the four kids are turned into the avatars they selected when configuring the video game.  Spencer (Dwayne Johnson; Fast 8) now has muscles and is fearless, Martha (Karen Gillan; Guardians of the Galaxy) is a kiss ass, hot female, Fridge (Kevin Hart; Central Intelligence) is a small zoologist who explodes when he eats cake, and Bethany (Jack Black; ) turns into a pudgy Cartographer.  They must work together to return the gem to the statue in order to win the game and go home.

Along the way, they run into a number of obstacles including man-eating hippos, Jaguars and Van Pelt (Bobby Cannavale; Mr. Robot) who wants to keep the gem for himself.  Van Pelt sends his henchmen after the team in order to retrieve the stone. Adding to their trials the team only has 3 lives each and if they die they will perish.

While Johnson and Hart have some great comedic moments, Black is the one to watch as he clearly stole the show.  His portrayal of a teenage girl trapped in a man's body leads to some of the funny moments in the movie and he pulled it off with the grace and wit of a seasoned professional.  Gillan also had some terrific moments and a few good action sequences disguised as "dance fighting".

Unlike the original film, the graphics here are rather well done because even twenty-two years ago the graphics for the first movie weren't all that great.  The cinematography this time was exceptional as the camera sweeps over vast expanses of the jungle with graduating levels of lush greenery.  The movie also has a certain Indiana Jones type of feel to it as they explore and unearth clues in order to win the game.  As an added bonus they included a nice tribute to William's character from the original.

While listed an action/adventure film Jumanji: Welcome To The Jungle true strength lie in its comedic elements as well as it's message of teamwork and believing in ones-self. The action, while entertaining is just window dressing.  The fight scenes, laughter and more serious moments, the movie seems to have something to offer everyone.  With a  PG-13 rating, it is an option most families can enjoy this December.

With so much "Oscar bait" clogging up this holiday season Jumanji: Welcome To The Jungle is a refreshing comedic/action bright spot in an otherwise drama-filled fare.

Purchase a DVD/Blu-ray/4K UHD physical copy of Jumanji: Welcome to the Jungle today at Amazon.com

For more information about Jumanji: Welcome to the Jungle visit the FlickDirect Movie Database.

Read More Reviews For Jumanji: Welcome to the Jungle