Through the years, Paddington has been loved by many and with this second installment of the franchise, he looks to be loved by many more. This is a hugely entertaining movie that will make you laugh out loud. And if you think you’re too old for Paddington…your wrong! 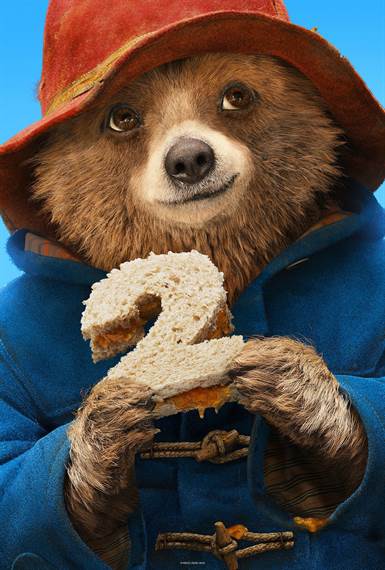 Purchase   DVD/Blu-ray/4K UHD
The loveable, Peruvian, orphaned bear Paddington makes a welcome return this autumn in his second and better outing. Once again directed by Paul King, the film takes the spirit and innocence of the Michael Bonds books and transforms them into this big-screen adventure full of humor that will make you laugh whether you're young or old.

The movie is centered around a pop-up book of famous London landmarks, which Paddington has earmarked for a birthday present for his Aunt Lucy back home in Peru, who will be celebrating her centenary birthday. Unfortunately, his antique dealing friend, Mr. Gruber (Jim Broadbent), has bad news for Paddington as the cost of the book is a little on the expensive side. Still undeterred, our furry friend sets out to get a job to pay for the book, first as a barber which ends in disaster, and secondly as a window cleaner which has some wonderful visual jokes that could come straight from a Buster Keaton movie. Sadly for Paddington, the flamboyant former actor Phoenix Buchanan (Hugh Grant) also has his eyes on the pop-up book but his intentions for owning it are rather more sinister; he wants it and is determined to get it, at any cost. So when Mr. Gruber's antique shop is burgled while Paddington is once again daydreaming about the book from outside, he gives chase. Regrettably, for him, the thief gets away and after leaving his paw prints everywhere at the crime scene Paddington finds himself handcuffed and unjustifiably sent to jail.

Here plays out the funniest parts of the film, dying his fellow inmate's overalls pink is just the start as is his first meeting with Knuckle's McGinty (Brendan Gleeson). You have the feeling that this may be one fight the intrepid little bear may not get through. In the end, Paddington wins them all over, with his marmalade sandwiches and an ursine hard stare. This all leads well into the last part of the movie that although may be a bit predictable is nonetheless enjoyable, especially with Dario Marianelli's score helping you along the way.

Director Paul King has managed to pull together a whole host of familiar British actors and each adds to the flavor of the film with cameos from Joanna Lumley, Noah Taylor, and Richard Ayoadde. A special mention goes to the former Dr. Who, Peter Capaldi, as the rather obnoxious neighborhood watch officer Mr. Murry, who you really would love to punch given the half the chance, and Tom Conti as the judge. Ben Whishaw reprises his role as voicing Paddington from a script co-written by King and Simon Farnaby, that I'm sure the late Michael Bond would have approved of. Huge Bonneville and Sally Hawkins return as Mr. and Mrs. Brown as does the ever lovely Julie Walters as Mrs. Bird. Stay behind for the credits as there are some great spoof newspaper clippings that will entertain and will ultimately lead you into Hugh Grant's not to be missed musical finale.

Through the years, Paddington has been loved by many and with this second installment of the franchise, he looks to be loved by many more. This is a hugely entertaining movie that will make you laugh out loud. And if you think you're too old for Paddington…your wrong! Although aimed at the younger generation, I would have no qualms recommending it to a more mature moviegoer.

Download Paddington 2 in Digital HD/4K from the iTunes store.