There are some redeeming moments here and there, a few good laughs even, but Poms is riddled with every cliché in the book. 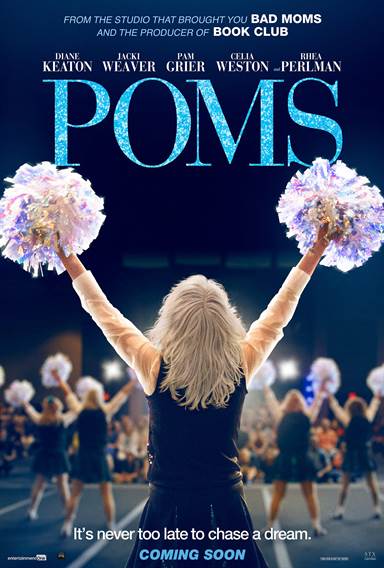 I don't know what this film about senior citizens in a retirement community is trying to be, and I don't think it knows either. Is it a comedy, a drama, a tale of female bonding through sports, or is it just about the cattiness of women? Maybe it's trying to be all those things at once, and perhaps that's why it doesn't work for me. Trying to be too many things at once is a fatal flaw in a script, and it gets even worse when it hits the big screen.

Diane Keaton has been a comic treasure ever since her appearance in "Anne Hall". She has great comic timing, unquestionable screen presence, and can usually save any film she's in. However, here she's upstaged by a lack of depth in her morose character and by another talented comic actress who gets all the good lines. It begs the question, why would she take this role? I'm going to wonder about that for a long time.

There are some redeeming moments here and there, a few good laughs even, but the film is boring and so riddled with every cliché in the book that you can see the twists and turns coming from at least mile away.

Here's The Storyline…Martha (Diane Keaton; Book Club) who is suffering from cancer, decides to move from her lonely city apartment to a Georgia based retirement community to finish out her life. Despite her continued self-imposed lonely life she begins to make friends. When her new best friend, Sheryl (Jacki Weaver; Widows), encourages her to achieve a long-lost dream of becoming a cheerleader, they recruit a group of other senior women and start a cheerleading club, much to the dismay of the community's ruling board.

The retirees set their sights on entering a competition, which is dominated by High School Cheerleading Squads, knowing full well that this will require everything they've got and more. It's their chance to show the world that it's never too late to follow your dreams.

Director Hayes appears to lack a sense of what plays well as comedy on screen and barely uses the wonderful location she chose, which is ripe for comic picking, and instead tries to add over-the-top characters to set the tone. Also mostly ignored are the cheerleading seniors, who include two very accomplished actresses (Pam Grier and Rhea Perlman). Unfortunately, as interesting as they could have been, they were never allowed to rise above being simple set pieces. It's a pity to waste such talent.

My take… "POMS" is nothing more than an adequate TV movie sandwiched between commercials. If you're interested, wait till it gets there to watch it.

Download Poms in Digital HD/4K from the iTunes store.

For more information about Poms visit the FlickDirect Movie Database.