While Fast & Furious Presents: Hobbs & Shaw is occasionally cheesy / stupid it has some redeemable qualities and action fans won’t be disappointed. 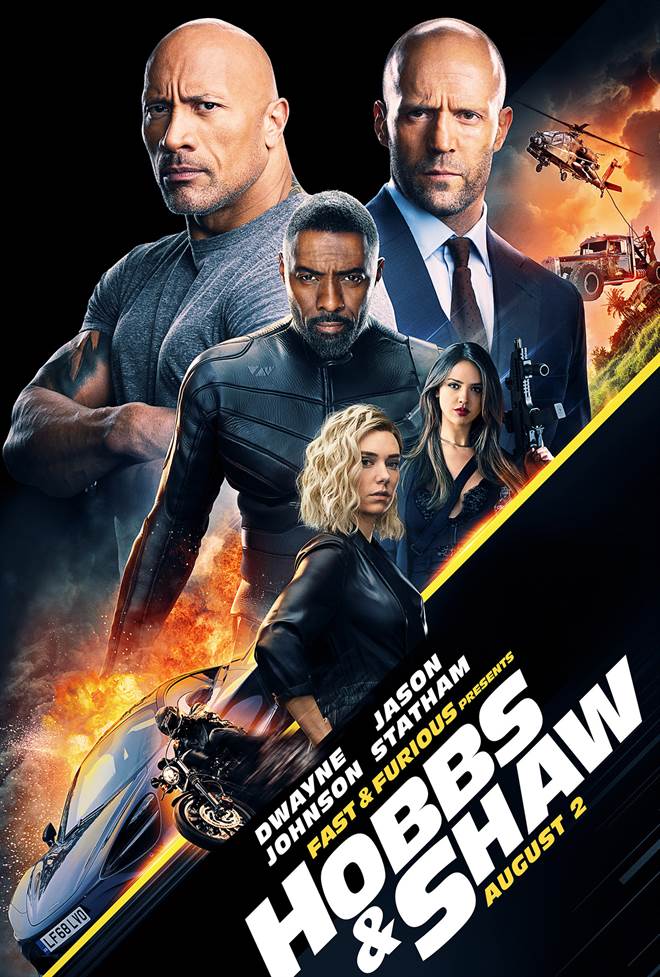 In 2001 we were introduced to Dominic Toretto (Vin Diesel, xXx), Brian O'Conner (Paul Walker, Running Scared) and a host of other colorful characters in Universal Pictures' The Fast and The Furious.  The movie centered around the idea of family and what that means surrounded by a backdrop of fast cars.  Since then there have been seven other films in the series that have taken the crew all over the world coming up against a myriad of enemies.  While the franchise is currently filming the latest movie, audiences are being treated to the first spin-off movie, Fast & Furious Presents: Hobbs & Shaw.

Luke Hobbs (Dwayne Johnson; Jumanji: Welcome to the Jungle) has been called upon by the CIA to locate and question an MI6 agent who has seemingly gone rogue and stolen a deadly virus.  Deckard Shaw (Jason Statham; The Meg) is former British Special Forces turned mercenary who has been brought in to also find the agent – his sister Hattie Shaw (Vanessa Kirby; Mission Impossible: Fall Out).  Hobbs and Shaw must work together to find out what happened and to keep Hattie safe from Etheon, a black Market company that created the virus and Etheon's biologically altered henchman Brixton Lore (Idris Elba; Thor: Ragnarok).

As the trio travels the world together it becomes obvious that Hobbs and Shaw despise each other while Hobbs and Hattie share an attraction.  After stealing the extraction machine from Etheon's Laboratory, they must then travel to Hobbs' home in Samoa to ask his brother, Mateo (Joe "Roman Reigns" Anoa'i; WWE Raw) to fix the damaged machine.  Unfortunately, Mateo blames Luke for betraying the family so the two don't get along.  As they wait on the island, they recruit family and friends to help fortify their location and prepare for Brixton's eventual arrival.  In a "Custer's Last Stand showdown" Brixton and the Etheon army attack in an attempt to regain the virus from Hattie.

Johnson and Statham trade snarky banter like a married couple offering up some funny and tense moments.  They are both well prepared to take on the stunts and the fight scenes that permeate the film.  Kirby, likewise, is a stand out as a tough as nails yet strikingly beautiful female agent who completes the trio well.  Elba is once again excellent as the antagonist who seems more machine than human.  The rest of the cast is strong as well, especially Helen Mirren (The Queen) as Deckard's and Hattie's criminal mother).  There are also two humorous cameos; the first by Ryan Reynolds (Deadpool) who is too "over the top" for my taste and the second that is a terrific surprise that I don't want give away other than to say he adds a memorable scene to the film.

The stunts are phenomenal with some amazing driving and motorcycle riding moments that seem more advanced and futuristic than 2019 would realistically allow.  As for the plot, it just skims the edge of being ridiculous with a script that is sometimes unintentionally laughable, especially where Johnson's sensitive moments pop up.  Some of the clichés are cringe-worthy and I rolled my eyes on more than one occasion.

Fast & Furious Presents: Hobbs & Shaw offers action junkies some great car chase and fight scenes though it doesn't much feel like a Fast and Furious film until the third act.  When the trio goes to Samoa with talk of family and custom cars we suddenly are transported back to the earlier franchise but the first almost two hours of the movie are more reminiscent of recent spy movies.

At almost two hours and twenty minutes, I fully expected to be bored but surprisingly I was engaged in the story and the characters for most of the movie.  It combined exciting action with laugh-out-loud moments and an interesting storyline.  While occasionally cheesy / stupid it has some redeemable qualities and action fans won't be disappointed.

For more information about Fast & Furious Presents: Hobbs & Shaw visit the FlickDirect Movie Database. This release has been provided to FlickDirect for review purposes. For more reviews by Allison Rose please click here.