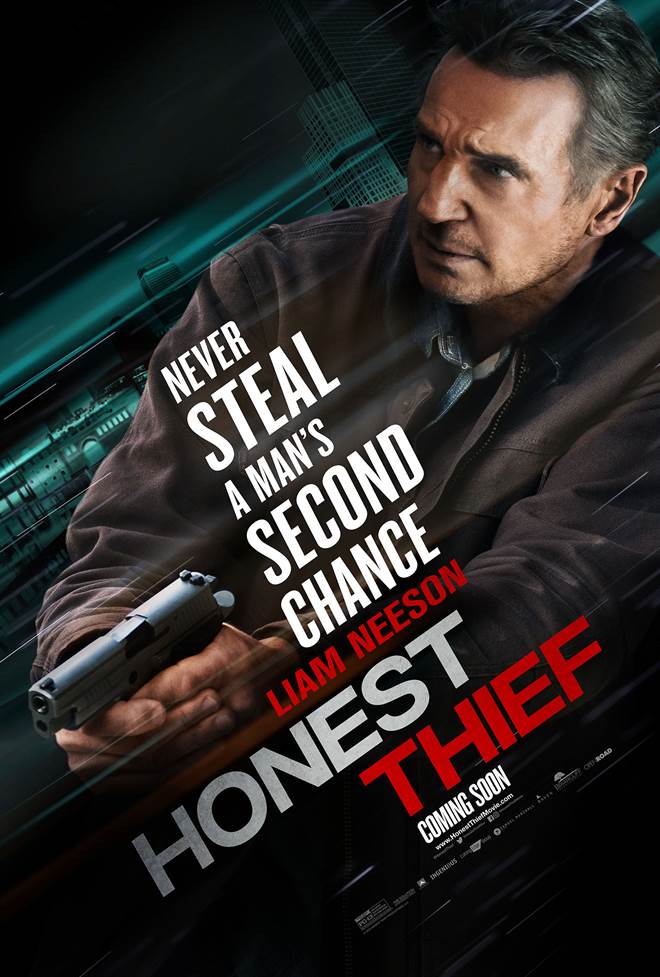 There is a saying that starts, "the love of a good woman…", which makes one wonder what is it that love could do. Could it heal a sick person?  Could it turn someone evil? Or perhaps it could make someone change their illegal ways and want to become a better person.  The thought is a noble one, but could it really happen?   Could finding the "right" woman make a person give up a life of crime?  For argument's sake, let's say it could…then what? What happens if you want to turn yourself in to pay for your crimes only to find out the people sent to bring you to justice end up double-crossing you and stealing your money?  For Tom Carter (Liam Neeson; Schindler's List) this becomes his reality in the new movie Honest Thief.

Tom was a bank robber. For ten years he would rob small-town banks and took over $9 million.  He was dubbed the "in and out" bandit because authorities could never figure out how he got into and out of the banks and they had no clue as to his identity.  Then, Tom met Annie (Kate Walsh; Grey's Anatomy) a graduate student who worked at a local storage unit.  After a year of the two dating, Tom was ready to live out his life with Annie, but he knew he had to pay for his crimes first.

Laying out his plan, Tom called the FBI to confess.  However, they were skeptical as they had heard in and out bandit tales before so Agents Nivens (Jai Courtney; Suicide Squad) and Hall (Anthony Ramos; Hamilton) were sent to investigate.  Tom told them where they could find the money he stole and gave them the key to a storage unit.  When they actually found the cash where Tom said it would be, they devised a plan to kill Tom and keep the money for themselves.  Tom, along with Annie- who knows nothing about Tom's past, go on the run until the crooked agents could be brought to justice.

Whether portraying a good guy or a bad guy, Neeson has a certain persona in action films and it doesn't tend to vary from film to film.  Unfortunately, that isn't a good thing for him as audiences will start to say, "Eh, I've seen him play this role before" and grow tired of his one-note.  He definitely needs to take a step back and find one or two roles like he had in Schindler's List so he can sink his teeth into the character and get back to more emotionally meatier roles.

Walsh is a good match for Neeson and she brings a lightness to her role which balances out Neeson's heaviness as he carries the burden of a dark secret.  Courtney is ok, though I admit, I'm not a huge fan and Ramos showcases his versatility in his portrayal of a conflicted FBI agent.   Robert Patrick (Terminator 2: Judgement Day) and Jeffrey Donovan (Burn Notice) lend their expertise to the cast as they portray FBI agents who are trying to figure out what is going on and why Tom and Annie run away when Tom was planning to turn himself in.

Writers Steve Allrich (Bad Karma) and Mark Williams (Ozark) offer a semi-unique concept as Neeson plays a bank robber looking to turn himself in.  However, when greed rears its ugly head, the plot becomes all too familiar.  Mix that fact with the hit or miss performances and you have a 50/50 chance of enjoying Honest Thief.  Overall, it wasn't bad, it wasn't great but don't expect anything new from Neeson because you will be disappointed.  Hopefully one day soon he can get out of this action movie rut and take on a more meaningful part.

For more information about Honest Thief visit the FlickDirect Movie Database. This release has been provided to FlickDirect for review purposes. For more reviews by Allison Rose please click here.