There will never be another Queen of Soul, but Jennifer Hudson certainly is a close second. 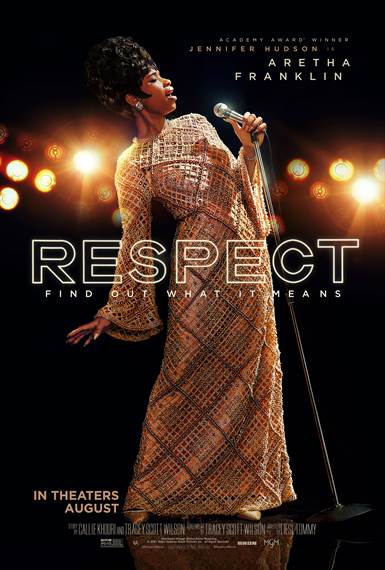 Aretha Franklin, the Queen of Soul, known to her friends and family as "Rhee", is indisputably one of the most iconic singers of the twentieth century.  Her smooth vocals, incredible musicality, tenacity, and tumultuous personal life made her a legend whose legacy will stand the test of time.  Long before her passing in August of 2018, talks of a biopic began swirling through the media, and on January 29, 2018, it was announced that Jennifer Hudson (Dreamgirls) would portray Aretha in the movie.  Over three and a half years later, Respect, will hit theaters nationwide.

Aretha Louise Franklin was born in Memphis, Tennessee on March 25, 1942, to Barbara (Audra McDonald; Beauty and the Beast) and Clarence LaVaughn "C.L." Franklin (Forest Whitaker; The Last King of Scotland).  Her father was a Baptist minister, and her mother was a pianist and vocalist.  Aretha had five siblings: Carolyn (Hailey Kilgore; The Village), Erma (Saycon Sengbloh; In the Dark), Cecil (LeRoy McClain; The Marvelous Mrs. Maisel), Carl Ellan, and Vaughn.  Aretha had four children of her own, two of them before she was even fifteen years old.  Aretha's parents separated in 1948 and four years later, her mother passed away.  Aretha lived with her siblings and father and grew up singing in the New Bethel Baptist Church in Detroit, Michigan, where her father was the Pastor.

By the age of eighteen, she had signed a recording contract with Columbia Records and was living in New York.  Controlled by those around her, and unable to record the type of music she wanted, Aretha had lackluster record sales and subsequently left Columbia for Jerry Wexler (Marc Maron; Glow) and Atlantic Records.  She also began being managed by her husband, Ted White (Marlon Wayans; G.I. Joe: The Rise of Cobra) which ultimately created tension until she finally divorced him in 1969.  In 1972, Aretha returned to her roots, recording an all-Gospel album, which went on to become her best-selling album of all time.

Not just anyone could portray the Queen of Soul, physically or vocally but Hudson offers an Oscar-winning performance evolving from the naïve, Baptist teenage to the confident, yet troubled adult Franklin had eventually become.  Hudson beautifully navigates her way through the highs and lows of Aretha's life, especially when "the demons" take over.  Whitaker is perfect as her father, who pushed Aretha to become the star she was while also contributing to those "demons".  McDonald, while having a smaller role as Aretha's mother, offers some powerful moments in the movie.  The rest of the cast is very talented with honorable mention given to newcomer Skye Dakota Turner as young Aretha and Kimberly Scott (The Abyss) as Aretha's paternal grandmother, who commands every scene she is in regardless of how briefly.

Director Liesl Tommy (Jessica Jones) keeps the pacing steady throughout the two and a half hours.  She beautifully establishes the past and Aretha's rise to fame while not dwelling too long on any one timeframe.  The soundtrack is incredible, and Franklin would be proud and flattered by Hudson's performance.

There will never be another Queen of Soul, but Jennifer Hudson certainly is a close second.  Her incredible singing is the only thing that is more impressive than her acting.  She embodies the spirit of Aretha while not mimicking the icon.

I have watched ninety-minute-long movies that I thought were too long but after 150 minutes in the theater watching Respect, I could have stayed another two hours, engrossed in Hudson's performance as Franklin.  Her life story is fascinating and with Tommy at the helm and a cast of incredible actors, this film is fantastic.

If Respect isn't nominated for multiple Oscar Awards, I will be shocked.

Download Respect in Digital HD/4K from the iTunes store.

Listen to the Respect soundtrack on Apple Music.