Home / Reviews / Where the Crawdads Sing

Where the Crawdads Sing (2022) Review

The young, up and coming cast are terrific with Edgar-Jones leading the charge for the others to follow. 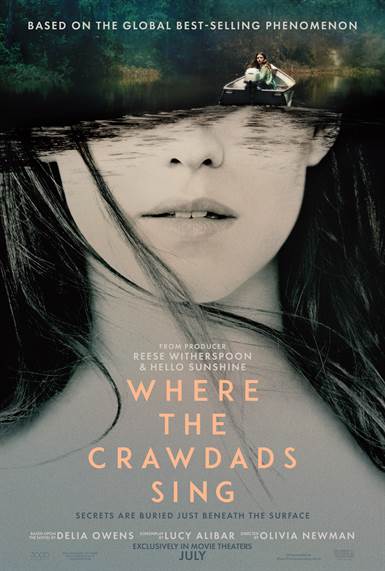 In 2018, Delia Owens' Where the Crawdads Sing became a best-selling novel and it is only natural that someone would want to buy the rights and make it into a feature film.   It offers all the elements of a good, Hollywood script - love, heartbreak, triumph, and mystery.  This month, the movie heads to theaters, but can it live up to the hype created by the novel?

Growing up in the 1950's marsh in North Carolina wasn't easy for Catherine "Kya" Clark.  Living in an abusive household, her mother left her and her older siblings to get away from their father.  Once she was gone, Kya's father turned his rage to Kya's older sisters and brother, until they too left.  Alone with her alcoholic father, Kya tried to stay out of his way in order to avoid his wrath.  Then one day he didn't come home, leaving Kya abandoned and alone in the marsh.  With the help of some of the locals and the older couple that runs the general store, Kya makes a living on her own in the marsh.

The townsfolk generally leave Kya (Daisy Edgar-Jones; War of the Worlds) alone until the day a young man she had been seeing, Chase Andrews (Harris Dickinson; The King's Man), is discovered under one of the watch towers in the marsh.  He apparently fell from an open grate and Kya is immediately suspected and arrested for murder with nothing more than circumstantial evidence to accuse her.  A retired attorney, Tom Milton (David Strathairn; Good Night, and Good Luck), decides to defend Kya at trial, believing her to be innocent.

Lucy Alibar (Troop Zero) has done a wonderful job adapting Delia Owens' 2018 novel of the same name into the screenplay.  While so often numerous details from books adapted into films are omitted, Alibar manages to retain the essence of the story.  From the tragedies to the triumphs, she tells Kya's story with the right balance of harshness and sensitivity.  She makes the audience feel sorry for the little girl, pitying her, while all the while making them wonder if she is innocent of the crime or not.  Of course, her screenplay wouldn't be nearly as good without the richness of Owens' novel.

The young, up-and-coming cast is terrific with Edgar-Jones leading the charge for the others to follow. She comes across as sweet, sensitive, and simple as Kya but at the same time infuses the character with sharpness and acumen that is kept hidden just below the surface.  Dickinson plays his role as the stereotypical "rich kid" who goes after the strange and exotic simply because he can well.  While the viewer knows from almost the beginning that he has died, there is a lack of sympathy as he was a jerk and ignoramus while he was alive.  Taylor John Smith (Hunter Killer) as Kya's first and one true love, Tate, portrays him as a true gentleman with a kind heart.  He and Edgar-Jones have great chemistry making their love believable.  Honorable mention needs to be given to Strathairn, Michael Hyatt (Nightcrawler), and Sterling Macer, Jr. (Dragon: The Bruce Lee Story).

Director Olivia Newman (First Match) beautifully displays the marsh and its creatures on film.  From wide, establishing shots of the calmness, serenity, and isolation of the marsh to the close-ups of the various entities swirling just below the surface, she offers a unique look and feel of the land as can only be seen through Kya's eyes.  Newman catches the audience's attention from the opening. Moments and hold them until the very last scene.  The pacing was perfect and the story was masterfully brought to life under her expert direction.

Adaptations of novels are always tricky material to bring to the big screen, especially if those novels are best sellers with devoted fans. However, with the combination of Newman, Alibar, and Edgar-Jones, Where the Crawdads Sing is an entertaining movie that offers the kind of quality work missing more often than not in cinemas these days.

For more information about Where the Crawdads Sing visit the FlickDirect Movie Database. For more reviews by Allison Rose please click here.

Where the Crawdads Sing images are © Sony Pictures. All Rights Reserved.