Home / Reviews / Honk For Jesus. Save Your Soul.

Hall and Brown are the shining lights in this pseudo comedy. 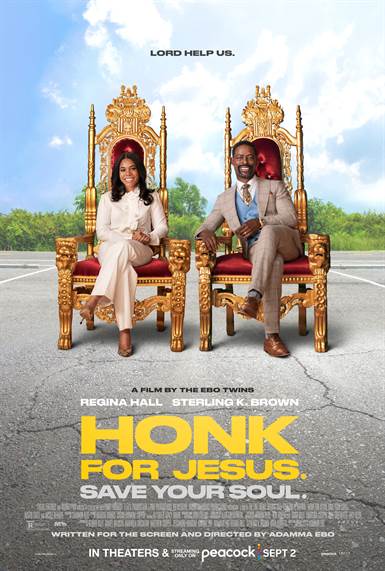 The earliest know televangelists can be traced back one hundred years to the 1920s.  Minister Samuel Parkes Cadman was one of the first, to preach to the masses over radio frequencies.  As time went on, some clergymen saw the potential in television and changed media formats with great success.  In the 1950s, televangelism occupied several broadcast television slots and in 1961, Pastor Pat Robertson founded the Christian Broadcasting Network (CBN). With a whole network devoted to Christianity, preachers came from all over to be a part of the "show".

Of course, along with the notoriety, came "donations" from their worshippers and as they obtained more money, the televangelists began living lavish lifestyles funded by their Megachurch members. However, with fame and fortune comes jealousy and probing that leads to the discovery that many high and mighty religious leaders are less than stellar human beings with controversies and scandals plaguing their profession year after year.  Honk For Jesus. Save Your Sole. stars Regina Hall (Girls Trip) and Sterling K. Brown (The Predator) as a televangelist couple who has fallen from grace and popularity after a scandal rocked their ministry.  Focus Features brings the mockumentary to movie theaters and streams on Peacock this weekend.

Pastor Lee-Curtis Childs (Brown) and his wife, "first lady" Trinitie Childs (Hall) built their mega-church from the ground up and after many years had a thriving congregation with tens of thousands of followers.  Along with that came money from their devoted flock to fund their mansion, cars jewelry, and expensive wardrobes.  However, they are forced to close their doors, when a sexual scandal rocks their ministry to its foundation.  Now, after the dust has settled, They are ready to open the church back up and invite a documentary crew to witness what they hope will be their triumphant return.

Hall and Brown are the shining lights in this comedy.  Their impersonations of what many of today's televangelists look and sound like seems spot on which only serves to add to the ridiculousness of it all and brings on the laughter.  Conphidance (Little America) and Nicole Behaire (42) add to the mockery as leaders of an up-and-coming church who benefitted from the Childs' scandal and the temporary closing of their ministry.  In her feature film directorial debut, Writer/Director Adam Ebo (C.R.E.A.M. & Butter) goes all in with the documentary-style filming giving the film the authentic look and feel of a true life story.

Unfortunately, the script seemed too basic for these talented actors, wasting their gifts.  The plot has a few funny moments, one or two of them hysterical, while some of the story is just sad and annoying.  Hall and Brown do their best and they certainly elevate some of the funnier and sadder moments throughout the film but even they can't completely save this one.  I admit I am not the target audience for this movie, and while I did laugh a few times, others laughed even more than I did.

In general, I take issue with people who outwardly claim to be so pure and religious (regardless of whatever that religion may be) while inside they are judging others and acting less than holy in their personal lives.  Those types of individuals annoy me, so I found parts of Honk For Jesus. Save your Sole. frustrating and walked out wondering what the point of all that was.  Adding to the absurdity was the sharp left turn the plot takes in the third act, suddenly switching gears from a somewhat light-hearted comedy to a heavy-handed drama.  It happened so quickly that I felt the film was going through a manic depressive episode plummeting from a terrific high to a dismal low.

Honk For Jesus. Save Your Soul is merely ok but it feels as if it could have been so much more.

Purchase a DVD/Blu-ray/4K UHD physical copy of Honk For Jesus. Save Your Soul. today at Amazon.com

Download Honk For Jesus. Save Your Soul. in Digital HD/4K from the iTunes store.

Listen to the Honk For Jesus. Save Your Soul. soundtrack on Apple Music.

For more information about Honk For Jesus. Save Your Soul. visit the FlickDirect Movie Database. For more reviews by Allison Rose please click here.

Honk For Jesus. Save Your Soul. images are © Focus Features. All Rights Reserved.