Terrific casting plays a large part of why Girls Trip works. They all have great comedic timing which makes the dialogue flow smoothly and the scenes work beautifully. 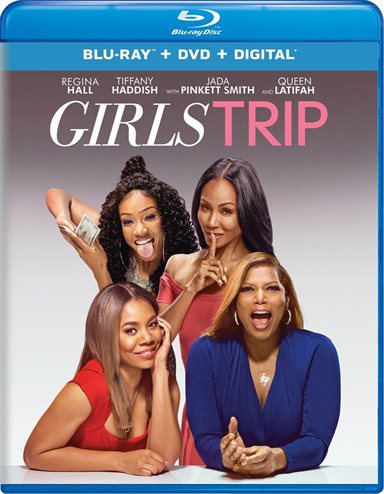 DVD/Blu-ray/4K UHD
Everyone should have a few good friends they can count on and keep for life and many people meet that group in their college years.  There is something about being in our late teens/early twenties with a new found freedom that makes us want to go out and do stupid things with others, which helps us form a bond with the people we are close to at that time.  However, that bond doesn't necessarily hold up once college is over and everyone moves on into their responsible "adult" years.  For Ryan (Regina Hall; Scary Movie) and her "posse" those years have crept up on them and life has gotten in the way, so when they have the opportunity to meet up at the Essence awards in New Orleans the four ladies take the opportunity to rekindle their friendship – with some bumps along the way.

Ryan Pierce (Hall) seems to have it all…a loving husband, a successful career and her fame is on the rise but she feels as though something is missing.  When she is offered the opportunity to be the keynote speaker at the Essence Festival in New Orleans she decides to get the "Flossy Posse" back together for a girls trip.  Sasha Frankin (Queen Latifah; Chicago) is a journalist who has become a gossip blogger which apparently doesn't pay the bills.  Lisa Cooper (Jada Pinkett Smith; Gotham) is the divorced, working, single mom and Dina (Tiffany Haddish; Keanu) is the one who never grew out of the sorority sister party mode they all enjoyed in college.

When the four ladies descend on New Orleans, they seem to be ready to have a great time and renew their sisterhood bond but when Sasha gets a picture from one of her contacts showing Ryan's husband, Stewart (Mike Colter; Luke Cage), in a compromising position with another woman, it takes everything Ryan has to protect her brand. On the verge of signing a deal to expand her "You can have it all" empire, the photo would be a scandal that could ruin her brand.  Sasha struggles with the dilemma of posting the picture and making a ton of money but ruining her friendship or try her best to squash the scandal before it erupts.  Meanwhile, Dina is still in party mode and makes things difficult for everyone else and Lisa needs to learn to get her "mojo" back after a bad divorce. Of course, it all blows up and the ladies fight amongst themselves, possibly ending friendships forever.

Usually, these "road trip/bonding" types of movies center around a bunch of guys trying to relive their frat boy days with a bunch of alcohol-induced frivolities.  This time, we see four career women (well three and Dina) not so much trying to relive the past but more so trying to reconnect with each other.  The premise isn't new but the script and cast make this movie worth watching.  Smartly written and directed, the film has a few great laugh out loud moments.  There is also a sentimentality and sincerity underneath the partying so the audience becomes emotionally invested in these four women.

Terrific casting plays a large part of why this movie works.  These ladies have an ease and naturalness to them that makes their friendship believable.  They all have great comedic timing which makes the dialogue flow smoothly and the scenes work beautifully.  Director Malcolm D. Lee (The Best Man, Holiday) is lucky he got such great talents to navigate this story.

The Blu-ray Combo pack includes a DVD disc and digital download but, of course, the best quality version is on the Blu-ray itself.  The 1080p high definition video is exactly what's needed to make the colors in the City of New Orleans pop.  The DTS-HD Master Audio 5.1 is well mixed and highlights the music of the soundtrack.  When the ladies are dancing in the club, you can feel the beat right along with them.  The disc doesn't offer many extras but those that are there are robust and offer some great looks behind the scenes.  They include Deleted scenes that include the director's commentary, twenty-five minutes of outtakes – some of which are hilarious, Planning the trip, Outrageous moments, the Essence of NOLA, Ne-Yo's extended performance and Lee's commentary.

With so many lame comedies out today that don't evoke even one chuckle, it is nice to have a film that can make you laugh while investing in the characters and the story.  Girls Trip is a strong entry into the world of comedic films and the cast really help make the movie one to watch.

Download Girls Trip in Digital HD/4K from the iTunes store.