Ticket to Paradise isn’t going to win any awards but as pure, indulgent entertainment it checks all the boxes. 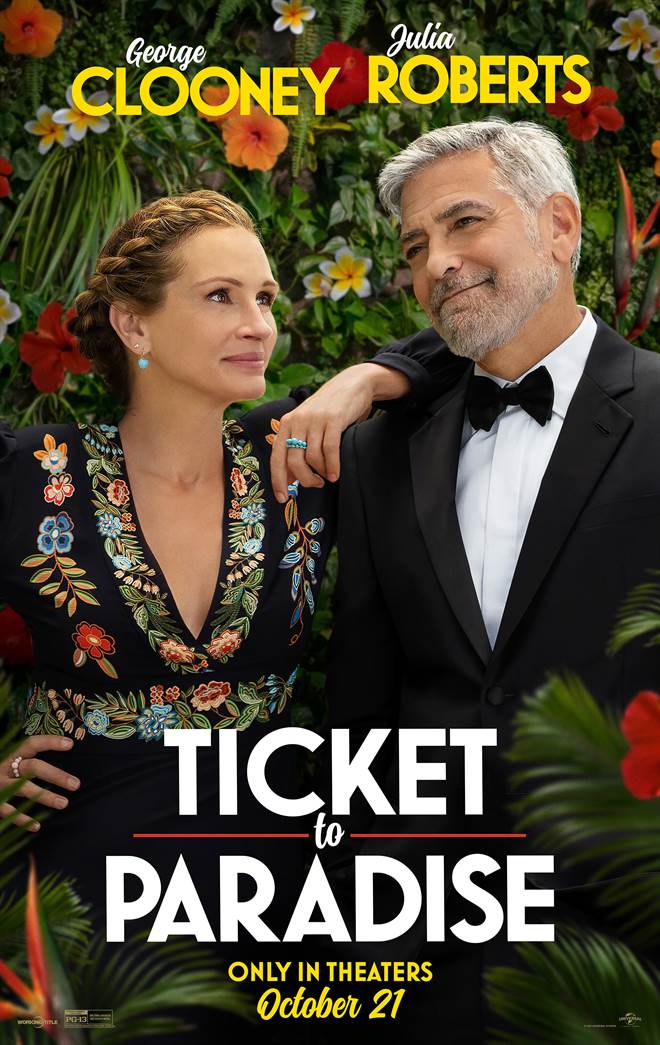 Romantic Comedies or Rom-Coms have been around even before movies had spoken dialogue.  Through the decades the age-old story of boy meets girl, boy and girl clash, and eventually both soften and develop romantic feelings towards one another.  Then the boy screws up (usually) and the girl leaves.  Finally, the boy wins the girl back by any means necessary.  It is a formula that is told over and over again with occasional variations.  This week, Universal Pictures offers its latest version with Ticket to Paradise.  Starring Julia Roberts (Erin Brockovich) and George Clooney (Up In the Air), the film follows divorced couple David and Georgia who team up to stop their daughter, Lily (Kaitlyn Dever; Justified) from getting married to a seaweed farmer in Bali.

Lily's parents have been at odds for twenty-plus years. They don't speak except to swap scathing barbs at one another and nothing changed when they went to attend Lily's law school graduation.  At the airport, they see Lily and her roommate, Wren (Billie Lourd; Booksmart), off to their well-deserved vacation in Bali.  However, David and Georgia are reunited at the airport two months later when they fly to Bali after learning that Lily is engaged to be married.  Not wanting her to make the same mistake they did 25  years earlier, they form a united front against a common enemy.

Once again Roberts and Clooney team up for a fun, little adventure and display their terrific chemistry on screen.  Their banter and comedic timing make Ticket to Paradise a step above other rom-coms and they are very well cast as Lily's bickering parents. Dever has been doing quality work for the past few years and she beautifully shares scenes with these two veteran actors.  Lourd adds some comic relief to the mix and is a stand-out amongst the supporting cast.

Director Ol Parker (Mamma Mia! Here We Go Again) takes advantage of the location to showcase the beauty that is Bali (while some of the movie was also shot in Australia).  He offers the audience wide, sweeping views of the sea and lush greenery that is present on the island and he captures the magnificent vistas of both sunrises and sunsets.  His pacing keeps the story moving along smoothly while his story is typical rom-com fair with some comedy thrown in for good measure.

Cinematographer Ole Bratt Birkeland (Judy) does magnificent work given the beautiful landscape he has to work with.  He utilizes every inch and moment of Bali and Australia to make the audience jealous they are not in the stunning locations at that very moment.  He knows well how to showcase the canvas that is lush trees and skies, clear, blue waters, and incredible flowers.  Costume Designer Lizzy Gardiner, however, is hit or miss.  With the Balinese clothing she is spot on, especially Lily's wedding dress but Roberts' wardrobe, from the frumpy rompers to the boxy suits, is actually distracting - and not in a good way.  She does get marks for Roberts' "mother of the bride" dress but putting the two leads in long-sleeved, black attire for a forest wedding in a sunny and tropical location misses the mark.

Ticket to Paradise isn't going to win any awards but as pure, indulgent entertainment it checks all the boxes.  Handsome, young couple madly in love - check; bickering divorced parents played by two beautiful and talented mega-stars - check; exquisite location -check, etc.  You can't expect or ask much more from a Rom-Com and Universal Pictures delivers in spades.  With all the superhero/action-adventure films that have come along recently, it is nice to get back to basics sometimes and Ticket to Paradise fits the bill.

Ticket To Paradise images are © Universal Pictures. All Rights Reserved.