Dawson however is magnificent, exuding Patrick’s strength, intelligence, passion, tenderness, etc. even as he lives in fear of being arrested. 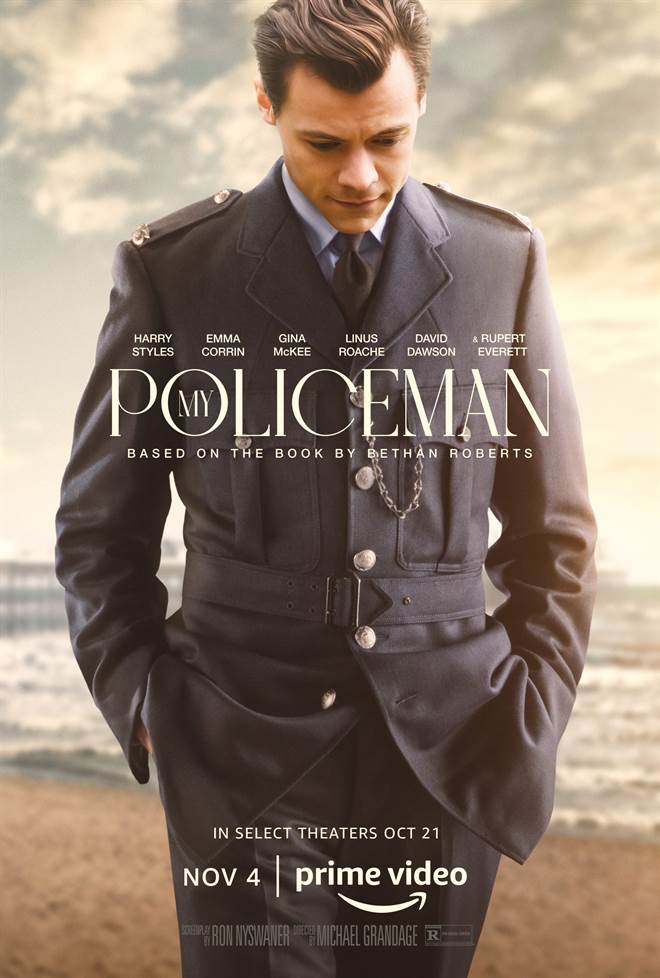 Anywhere one looks lately, Harry Styles (Dunkirk) seems to be there.  He has embarked on a world tour, co-starred in Don't Worry Darling, has been tabloid fodder as of late having been photographed with alleged girlfriend, Olivia Wilde (TRON: Legacy); supposedly spit on Chris Pine at the Venice Film Festival, and now he has a second film coming to theaters/streaming this fall.  My Policeman, based on the Bethane Roberts novel of the same name,  is a story about three lives that have been intertwined for over forty years in a complicated love triangle.  The film, produced by Amazon Studios, showcases an unconventional and unusual pairing in 1950s England.

Tom (Styles) is a policeman who gets summoned to a crash scene only to discover the victim does not want his assistance.  While there, he strikes up a conversation with the man who witnessed the crash, museum curator, Patrick Hazlewood (David Dawson; The Last Kingdom).  When Patrick invites Tom to a private tour of the museum, Tom brings along his friend, Marion (Emma Corrin; The Crown), who secretly loves Tom.

The three become constant companions, attending music recitals, the opera, and going on picnics.  As Tom and Marion become closer so do Tom and Patrick until everything comes to a head and falls apart.  Fast forward forty years and Patrick (Rupert Everett; My Best Friend's Wedding), who has had a stroke, has come to live with Marion (Gina McKee; Phantom Thread) and Tom (Linus Roache; Batman Begins) at Marion's insistence and Tom's consternation.  Unwilling to confront the past, Tom becomes distant, refusing to see Patrick, until he has no other choice.  Only then does the healing begin.

Once again, Styles is outmatched by his fellow thespians.  Corrin is fine as young Marion and the two have an easy rapport.  Dawson however is magnificent, exuding Patrick's strength, intelligence, passion, tenderness, etc. even as he lives in fear of being arrested. While the film is powerful, and I understand the politics and profits behind casting Styles, it could have been even more so with an actor who matches Dawson's talent.  The older counterparts - Everett, McKee, and Roache - are all very good and physically they have enough resemblance to Dawson, Corrin, and Styles to make the film believable.

Director Michael Grandage (Genius) does a decent job of handling the story and the sensitive material.  He truly makes it feel, with help from his cast, like a romantic, passionate, love story full of longing and emotional, as well as physical, intimacy.  Writer Ron Nyyswaner (Philadelphia) doesn't seem to get the flavor of the story, making his screenplay not much more than merely serviceable.  Cinematographer Ben Davis (Three Billboards Outside Ebbing, Missouri) offers some interesting moments, especially in Venice, but could have offered even more stunning visuals.  The rough waters of the sea as (older) Tom walks along the beach with his anger and resentment is symbolic of the inner chaos he must have been feeling since Tomcat into Tom and Marion's home.

My Policeman is more than just a novel adapted to be seen in movie theaters worldwide.  It is a social commentary about how people are still being treated and how, as much as things change, the more they stay the same. If you are someone who is homophobic, or who is uncomfortable with two men being intimate, this isn't the movie for you.  However, since the love scenes are tastefully shot with caresses, kissing and nudity, if you embrace love for being love, then I might recommend you see it.  If you are going to the film for Styles, stay for the touching story of two men wasting four decades of time, afraid to live the way they wished they could.

For more information about My Policeman visit the FlickDirect Movie Database. For more reviews by Allison Rose please click here.

My Policeman images are © Amazon Studios. All Rights Reserved.